Pandora's Box is open: why Trump expanded US jurisdiction to Hong Kong 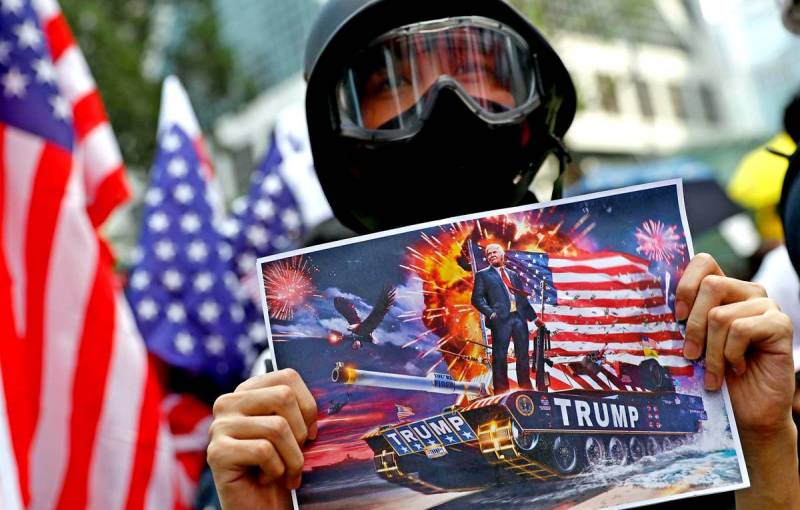 President Trump has signed two laws in support of Hong Kong protesters, effectively opening the Pandora’s box. With a stroke of the pen of the head of the White House, US jurisdiction was extended to the territory of another country. Today is Hong Kong, and tomorrow is Tibet and Xinjiang Uygur Autonomous Region of China? What then, Kaliningrad, Ingermanlandia, Cossack?


From the point of view of international diplomacy, the situation is wild. Since 1997, Hong Kong (Hong Kong), formerly a British colony, is a special administrative-territorial region of the PRC. For a half-century transitional period, that is, until 2047, the Hong Kongs received the broadest autonomy and British law. The official languages ​​are two languages ​​at once - English and Chinese.

This gradual reintegration of the former colony by Beijing is called "one country, two systems." She has both her supporters and opponents. The latter is supported by London, since Great Britain is not at all happy with the loss of one of the leading financial centers of Asia and the whole world. In 2014, immediately after the events in Ukraine, similar processes began in Hong Kong, called the "Revolution of Umbrellas." However, thanks to the thoughtful actions of the authorities and law enforcement agencies, the second Maidan was then avoided.

Now events go on the second round. Protests have been going on since June, but they have become much tougher and bloody. Hundreds of policemen were injured, more than one and a half thousand people were hospitalized, thousands were detained. It’s hard not to see the notorious “hand of the West” behind it all. And it’s okay it would be only the British-Chinese showdown, but the United States entered the matter in a boorish manner, which generally had nothing to do with Hong Kong. Donald Trump signed under the laws that effectively extended American jurisdiction to parts of China, with a very cynical wording:

I signed these laws out of respect for Xi Jinping, China and the people of Hong Kong. They are being launched in the hope that the leaders and representatives of China and Hong Kong will be able to peacefully resolve their differences.

You might think that without Washington or London, Beijing and Hong Kong would not understand each other. On the contrary, the Americans only added fuel to the fire. Now the State Department will determine at least once a year whether Hong Kong is sufficiently autonomous from China to trade preferentially with the United States. In addition, the United States forbade Hong Kong police to supply means to disperse protesters and threatened sanctions for violating human rights.

Such undisguised interference in the affairs of a sovereign state caused a sharp rejection in Beijing, and in the administration of Hong Kong itself. A spokesman for the Chinese Foreign Ministry said:

This is a serious interference in the affairs of Hong Kong, which is the internal affair of China. We made a strict presentation to the American side.

Why is Washington crawling into trouble with its largest trading partner? As a matter of fact, the answer to it is already hidden in the question. President Trump is clearly not opposed to forcing Beijing to sign a trade deal that is not profitable for him by playing the Hong Kong Gambit. If the PRC balks, it could blaze on further in Tibet, the Xinjiang Uygur Autonomous Region.

Such an opportunity should be remembered in Moscow. What if, for example, in Kaliningrad the “Konigsbergs” raise their heads and begin to act on these patterns, and Trump signs similar laws regarding our exclave? What if neighboring countries, for example, Germany, take care of the rights of protesters, which will link cooperation on gas and other issues with the observance of human rights in their historical land? Pandora's box is easy to open, but closing it will be difficult.
Ctrl Enter
Noticed oshЫbku Highlight text and press. Ctrl + Enter
We are
The Anglo-Saxons decided to "pick up" Hong Kong from China
The future of Donbass: part of Russia or a new "protectorate"?
Reporterin Yandex News
Read Reporterin Google News
19 comments
Information
Dear reader, to leave comments on the publication, you must sign in.