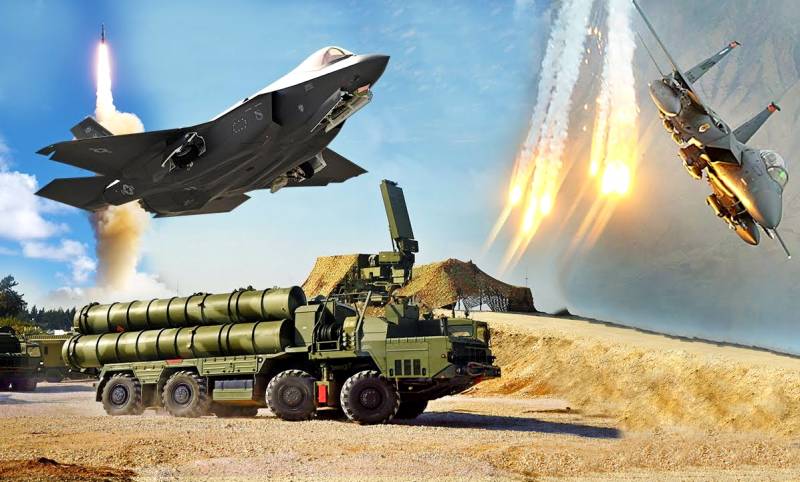 Ankara’s test of the Russian S-400 Triumph air defense systems, which provoked a new outburst of indignation in Washington, is far from being the only demarche of the Turkish side, which has recently stubbornly and consistently upheld the right to “have one’s judgment” before Western partners.


As it turned out, the local representatives in NATO flatly refused to support one of the Alliance’s most important anti-Russian initiatives, opposing their own allies in the military bloc in implementing plans to build up a military presence on the borders of our country. How beneficial is this defiant behavior of Turkey to Russia, and, most importantly, to what extent can we rely on it in the future? Let's try to figure it out.

The Turkish Air Force fighter planes “shaving” in the vicinity of their own capital may have caused some excitement among local residents: “The military again decided to play a coup ?!” The explanation turned out to be far less dramatic for the Turks, but it was extremely unpleasant for the Americans, who were watching with an ever-increasing alarm over what was happening overseas. Fortunately, it doesn’t smell of any putsch in Ankara, and the F-16 rushing along strictly calibrated trajectories merely served as “experimental” when testing the Triumph anti-aircraft missile systems received by Turkey from Russia, preparing to defend the sky above the capital. In the United States, they reacted very nervously and even at the highest level to this, in general ordinary and thoroughly everyday event. US Secretary of State Mike Pompeo has not dropped a stingy male tear, talking about how much Washington is “concerned” about what is happening. At the same time, a senior official did not fail to emphasize that the use of US-made combat aircraft as a “conditional target” was an additional irritant for the United States. What is it that turns out? Today they are "shooting" for the F-16, and tomorrow they will turn the F-35 into a target ?! The most interesting thing is that, conducting the current exercises exactly the way they are conducted, Ankara most likely sends precisely this “signal” to its overseas allies. Fortunately, a couple of “most modern” ones are already there ...


The United States, meanwhile, continues to stubbornly bend its own. The very same Mike Pompeo, for the umpteenth time (the number of such demarches has not been accountable for a long time), said that Washington "wants to see how Ankara refuses to use Russian systems." Completely. Finally and irrevocably, from the word “absolutely” ... After the announcement of such a categorical position, the Secretary of State’s remaining assurances that he intends to continue to “talk” with the Turkish side and at the same time “tries to understand the situation”, “hoping for understanding” sound absolutely unconvincing. All these "conversations" at the moment are nothing more than the "communication" of the deaf with the dumb. And the Americans themselves saw the Americans' dreams of “seeing the abandonment of the S-400”. In the coffin ... If Trump himself was not able to "squeeze" the stubborn Erdogan in a personal meeting on his territory, then neither Pompeo nor his subordinates should even try. The Turkish president, as if deliberately mocking them, continues to broadcast openly anti-American rhetoric to the whole world - like the latest call to his compatriots voiced literally yesterday in the local parliament to completely abandon the use of the US dollar, showing "Turkish nationalism." However, this head of state also acts in the corresponding vein. Including - and in matters of military-technical cooperation with Russia. A statement by the head of Rosoboronexport, Alexander Mikheev, about Turkey’s plans to supply new Triumphs, in addition to the existing ones, would hardly have sounded if this issue had not been resolved at the level of leaders both in Moscow and Ankara. By the way, Mr. Mikheev also emphasized that this is only part of some “big plans” in the defense sphere that both countries have.

However, the use of shocking Americans for the needs of their precious fighters, this is not the only way to tickle the nerves of Washington, used by Turkey. Recently, information appeared in the Western media that was very painful both for the United States and for NATO as a whole. It turns out that the representative of Ankara in the Alliance received completely clear and unambiguous instructions from his own leadership: not to support any North Atlantic global initiatives and plans, taking the most rigid and implacable position on any issues. Moreover, he is ordered to carry out such policies not only during official events, but even in private conversations with their own colleagues from other countries of the bloc. To affirm something like: “But Babai-aga is against!”, Which would not be discussed. The most unpleasant thing is that, taking such a position, Turkey began to very actively "drown" an extremely important thing for NATO: a military plan to "protect Poland, Latvia, Lithuania and Estonia from Russian aggression." This frankly awesome idea was born in the minds of North Atlantic strategists back in 2014, exactly after the reunification of Crimea with Russia. True, the corrosive WikiLeaks declared the existence of some completely secret and keeping the Alliance in the deepest secrecy "directives on the defense of the Baltic states from Russia" back in 2010, when neither the "Maidan" nor the "Crimean spring" was still in sight ... However , it doesn’t matter - today the existence of such intentions, which have an openly anti-Russian orientation, is not only not concealed in NATO, but emphasized in every way. However, there is a problem ...

The thing is that a document of this level must certainly be approved, approved and signed by plenipotentiaries of all 29 countries that are part of the North Atlantic bloc. No other way. Apparently, it was planned to announce its adoption with great fanfare at the NATO summit, which is due to take place in London as soon as possible, on December 3-4 of this year. Nevertheless, Turkey flatly refuses to endorse anything, until it obtains from the allies what it needs. It is not worth it to harbor illusions - the point here is not at all in Ankara’s “pro-Russian” position, however much we would like to see such in its actions. The Turks are demanding a very specific price for their accommodations: the Alliance recognizes the Kurds as terrorists from the YPG units based in northern Syria, which they, apparently, are firmly set to lime. According to one senior NATO official, "Ankara is taking hostage Eastern Europe until it receives concessions from us that untie its hands." Certain hopes in the Alliance lay on the fact that in the very near future the Turks will have to update a similar plan already for their own protection, which should be carried out by the North Atlantic bloc. However, in this area, the chances of the Turkish allies are, let's say, dead. Erdogan himself has already proved to the whole world his own independence in all matters, including the military, and is clearly going to continue in the same vein. In any case, the last official declaration of intent to continue the “Source of Peace” exactly as long as “until all the goals have been achieved,” came from Ankara just yesterday, after a meeting of the National Security Council under his chairmanship.

So far, the only country with which Turkey is ready not only to speak more or less on equal terms and coordinate its own actions, including military ones, is Russia. In any case, the coordinated actions of both countries in Syria not only allowed to avoid a sharp escalation of hostilities in the region, but also inflicted, indeed, an unprecedented damage to the international image of the same United States, which was hit by a storm of criticism for "betrayal" and " allies. " We should not forget about the most important economic factors that today firmly "tie" Ankara to Moscow. In the first decade of next year, a solemn ceremony of launching the Turkish Stream gas pipeline is scheduled, personal participation in which, most likely, the leaders of both states will take. So much has already been written about the significance of this project both for the Russian side and for the Turkish side that it is not worth repeating. By the way, in the light of the prospect of the termination of gas transit through Ukraine on January 1, Europe is vitally interested in the "string" carrying "blue fuel" across the Black Sea. And, perhaps, to a much greater extent than in the "protection" of not too adequate Balts and Poles from the "Russian threat" that they have adopted. Of course, Turkish demarches in NATO do not make anyone happy, especially after the epic announcement of the Alliance's "brain death" by Emmanuel Macron. Jens Stoltenberg continues to repeat the mantra that the military bloc headed by him “is the only guarantor of security in Europe”, but with all this “breaking over the knee” Ankara for the sake of demonstrating “North Atlantic unity” is unlikely to even try. And it is useless.

Thus, Russia receives an extra trump card in the confrontation imposed on it by the Alliance, without making special efforts. At the same time, it would be extremely erroneous to deceive ourselves about Ankara. As already mentioned, speaking out against the anti-Russian plans of the Allies, she pursues exclusively her own goals. Well, it just so happened that it was this question that became the stumbling block, and not some other ... The same militarytechnical cooperation with Moscow does not prevent the Turks from doing business in the defense sphere with Kiev. Supply him with UAVs, communications and much more. And also - from time to time to make statements regarding the "Ukrainian identity of the Crimea." It should be understood that this is said solely with a distant sight to the Tatar Crimea. That is - Turkish ... International experts today talking about the revival in Ankara of the "imperial spirit", heavily implicated in the ideas of pan-Turkism, about the appearance in its foreign policy of not only aggressive, but also revanchist features, have quite good reason for their statements. No, of course, it is difficult to imagine that Recep Erdogan cherished specific plans for the restoration of the Ottoman Port, but something sultanic about him begins to be seen the further, the more. At this particular stage, the interests of Turkey and Russia basically coincide, in any case, on the main points. Again, the common enemy (let's call a spade a spade!) In the person of the United States is very conducive to understanding and consolidation. Nevertheless, it is worth remembering that the history of relations between our countries is a change of periods that differed from one another, like day from night. And they fought and were friends. Then they began to fight again ... What principles should be fundamental for Russia in the framework of the alliance that has developed now? Perhaps realism. And the observance of one’s own interests first of all and under any circumstances. And there - it will be seen.
Ctrl Enter
Noticed oshЫbku Highlight text and press. Ctrl + Enter
We are
Russian anti-aircraft dome over Turkey: why is it a real breakthrough
Turkey’s purchase of S-400 will mark the beginning of the end of NATO
Reporterin Yandex News
Read Reporterin Google News
5 comments
Information
Dear reader, to leave comments on the publication, you must sign in.