"Forgetting" about the modern F-35, the Polish Air Force returns the MiG-29 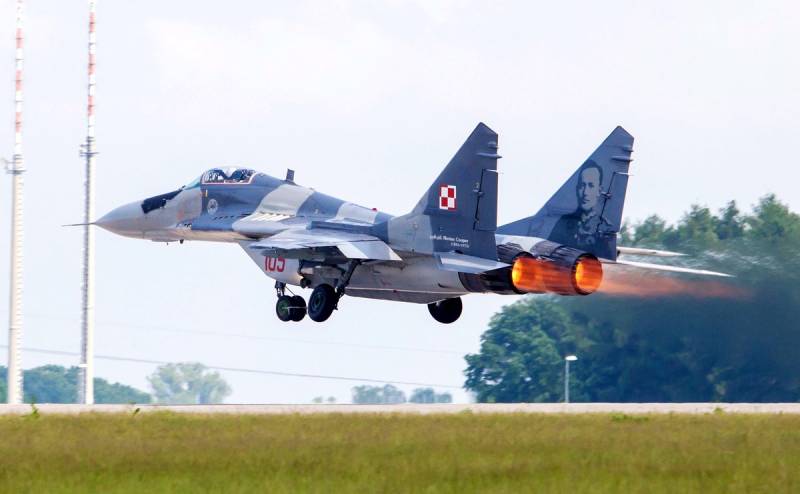 Amid enough unpleasant fiasco of our combat aircraft in the Indian market traditionally open for them, a statement made by representatives of the General Command of the Armed Forces of Poland sounded a real sensation. The pilots of the Air Force there will once again take seat at the helm of the good old MiG-29.


And this despite the completely pathological Russophobia of official Warsaw, in spite of the mud puddles poured out on our planes by some of its representatives, and most importantly - despite the emerging deal to acquire fifth-generation American fighters.

But this is exactly how the Polish Ministry of Defense officials glorified our fighting vehicles the whole world after another disaster of the MiG-29 fighter that happened on March 3 this year in the Masovian Voivodeship of the country. Emotions were greatly fueled by the fact that this accident was not the first - the MiGs of the Polish Air Force crashed, starting in 2017, exactly one machine a year, and in 2018 the incident also led to the death of the pilot. The head of the Polish defense department, Mariusz Blaszczak, from whom the indignant public once again demanded an explanation, did not find anything better than to reassure her with assurances that “the Soviet machines that had long flown away” were living out in the army almost the last days. Their "era" is ending! In the very near future, the valiant pilots of the national air force will transfer to the brand new fifth-generation fighter jets, brand new “most modern and advanced in the world”. Of course, only F-35s were considered as those without alternative, to which Warsaw will now join the "elite circle of owners". These are all quotes from Blaschak. Well, the Polish ambition, of course ... Yes, and in combination with the habit of considering "the best" exclusively what the price "rolls over". And now the dream came true - after a trip to Washington by President Andrzej Duda, which the Polish press declared no less than “triumphal,” Donald Trump, fascinated by his charm, announced his determination to make the newfound ally “multiple” F-35 Lightning II.

After a fairly short time, the US State Department approved the deal. The Pentagon Defense Cooperation Agency proudly announced its intention to sell 32 fifth-generation fighters to Poland. It would seem that what else is needed for happiness? However, against the backdrop of all this grandeur, the Polish Air Force inspector Jacek Pszczyła suddenly makes a statement that sounds like a terrible dissonance with everything that was said earlier and in general, giving away natural sedition. It turns out that Polish pilots "trust the MiG-29!" Moreover, they "want to fly precisely on these machines." What is the passage, however ... According to Pshchola, in addition to the five fighters currently in full readiness, another 12 Soviet-made aircraft will be allowed to fully operate after test flights. It turns out, not so "obsolete"? And is everything all right with reliability? The ban on piloting the MiG-29, as you might guess, was introduced in the Polish Air Force after the last crash. However, such restrictions were reinsured there after each such incident. However, despite the most thorough checks and investigations, experts did not make conclusions about technical unsuitability of Soviet military vehicles. Although, quite possibly, such a task was set for them. The point here, for sure, is one more thing. In the best case, the first F-35s will arrive in Poland no earlier than 2024, and the creation of their full squadron can only be discussed in 2026. And the MiG-29 - here they are.

It is impossible not to mention that it was Poland among the countries that at one time had fled to NATO from the Warsaw Treaty Organization that was noted for its stubborn and methodical “gathering” of the MiG-29. The first such machines, this country, which was then socialist and "fraternal" for the USSR, wished to acquire as early as the 80s of the last century. Then a contract was signed for 36 fighters and two combat training vehicles MiG-29UB. Deliveries on it began in 1989-90. However, the collapse of the police department, followed by the USSR, led to the termination of the terms of the contract. The domestic “defense industry” was peddling, in fact, collapsing, and even the Poles who were drunk by the newfound “freedom” were somehow not up to the fighters. However, when the passions of those bad years somewhat subsided and the situation stabilized, Warsaw returned to the original plan: to become the owner of as many MiGs as possible. Their next batch (10 combat and 1 training vehicle) was purchased in neighboring Czech Republic in 1995-96. Well, how "acquired" ... The revolving Poles simply traded fighters for exactly the same number of W-3 Sokol helicopters of their own production. Good gesheft. The most interesting thing is that even joining NATO initially did not at all diminish Polish love for the MiG-29! Yes, the planes were slightly redone for operations in the conditions of the Alliance’s unified air defense system, upgraded in accordance with its standards. And then began to look - where else to get hold of MiGs!

A new opportunity presented itself when the German Bundeswehr Luftwaffe entered the new generation EF2000 Typhoon fighters. This was truly a jackpot for Warsaw: in 2003-2004, the Polish Air Force received 18 MiG-29 and 4 MiG-29UB fighters in several stages. And each of them - at a completely symbolic price of 1 euro! Not only did the combat vehicles by Berlin, in fact, be donated to the Poles, they were in some ways superior in performance to those already in service with the military aircraft there. For example, they had two outboard fuel tanks instead of one, engines with a longer resource (but with less traction) and even the built-in Air Combat Maneuvering Instrumentation - a special system for practicing actions in air combat conditions. True, the situation was somewhat spoiled by the fact that the "ushatany" German "gifts" were almost to the limit. After a defect inspection, only four of them were recognized as not requiring immediate repair. Two had to be scrapped at all - it was more expensive to mess with them. However, the 14 MiGs, which were donated, nevertheless replenished the ranks of the Polish Air Force, thus gaining a fleet of 26 standard MiG-29s and 6 two-seater vehicles, which can be used as training ones. Naturally, all these machines were periodically modernized and reworked to NATO standards. The work was carried out mainly by local enterprises, although, as far as is known, the specialists of Israel Aerospace Industries were noted in the “fine-tuning” of Polish MiGs. In any case, the local Air Force managed not to repeat the fatal mistakes of some former colleagues in the ATS, which turned their aircraft into a misunderstanding ...

An example of how you can ditch even the best aircraft, can serve as the sad fate of the MiG-29, who ended up in Hungary. It should be borne in mind that Budapest got almost the newest cars in Eastern Europe. The thing is that in 1993, handing over 22 fighters and 6 combat trainers to the Hungarians, Moscow thus repaid the $ 800 million debt remaining since the USSR. Until 1995, Russian specialists regularly carried out warranty service and even extended it until 1999. But beyond the Hungarians, as they say, the toad crushed corny. The local Ministry of Defense, which was in a half-miserable state, decided that investing in the modernization of "outdated" fighters was "impractical." Well, and, of course, the absolutely fantastic mess that prevailed in the local Air Force affected them - even the simulator for pilots, delivered with the planes, was never bothered to bring into working condition, and then he “suddenly” somehow ended up in Peru .. Add to this the storage of fighter jets in the open air, the constant reduction of flight hours of the pilots there - and it remains only to be amazed that during the 17 years of service in Hungary, only three MiG-29s crashed there! Instead of purchasing the necessary spare parts in Russia, the Hungarians preferred to disassemble their own military vehicles into them. The result is logical - in 2010, fighters completely unsuitable for flights were completely decommissioned ... However, this situation is typical not only for Hungary. Bulgaria at the time of the collapse of the police department also had a good MiG-29 fleet. True, 12 fighters and 3 training vehicles as a result remained combat-ready of them. However, until 2015, the Bulgarians managed to exploit even the "oldies" of the MiG-21. With the MiG-29, they got about the same story as the Hungarians.

It’s a pity to invest money, and there’s nothing to fly on. In search of “where is cheaper” in 2015 rushed to the Poles. Well, they repaired ... As it turned out, Ukraine also joined the process of "modernization", which at one time "served" the Croatian Air Force planes that screamed all over Europe. In Bulgaria, it all ended in a criminal case against the Minister of Defense Nikolai Nenchev, who, as it turned out, instead of the promised “savings” of 12 million euros, caused damage to the country's budget in the amount of 3 and a half million. In the end, Sofia returned with a guilty head to the MiG RSK service. True, recently they seem to have gathered there to switch to the American F-16s, realizing that the “super-modern” will not be pulled in any way. Well, good luck ... But you don’t have to whine about the fact that the Russian Air Forces, it turns out, are “specially exhausted by Bulgarian fighters”, making “provocative flights from the Black Sea” and forcing them to fly into the air so that they “faster have developed your resource! ” This, bros, already smells paranoia, you know. The most, perhaps, the most tragic fate of the MiG-29 in Ukraine. After the collapse of the USSR, she got 245 (!) Of such machines. Well, as they say, it’s better to lose with a smart than to find with a fool. The whole history of “unfathomable” is proof of this. The only question is how many of these fighters were simply ruined by improper storage and mediocre exploitation, and how many resourceful Ukrainians managed to “push” with considerable personal gain. It is reliably known, for example, about one and a half dozen of these vehicles that “flew” to Azerbaijan. However, the MiG-29 with obvious Ukrainian "roots" were found even in Africa - in the same Chad. As of 2017, Kiev announced the presence of 37 fighters (despite the fact that two such aircraft were ditched in 2014 in the Donbass), which they were going to “modernize” there, of course, on their own. However, knowing the general’s tendency to remain uncontrollable to rampant and shameless lies, this figure can be called into great doubt. Well, in this case - the less the better.

The MiG-29 is an excellent combat vehicle, many times in practice proving its own high qualities. The “barmalei” from ISIS could tell a lot about them, according to which these aircraft, armed with Damascus, fully worked in Syria. The problem is that, being mixed with sand and stones, you will not talk much. Now the Poles recognize respect and love for our MiG ... I don’t know how such a “betrayal” will survive in Washington, but the main thing is that our MiGs are still the best!
Ctrl Enter
Noticed oshЫbku Highlight text and press. Ctrl + Enter
We are
F-35 and Patriot: Poland seriously conceived to fight with the Russians
Ten "defeats" of Putin
Reporterin Yandex News
Read Reporterin Google News
11 comments
Information
Dear reader, to leave comments on the publication, you must sign in.