Unpleasant news for Russia: why Rafale “defeated” Su-30 in India 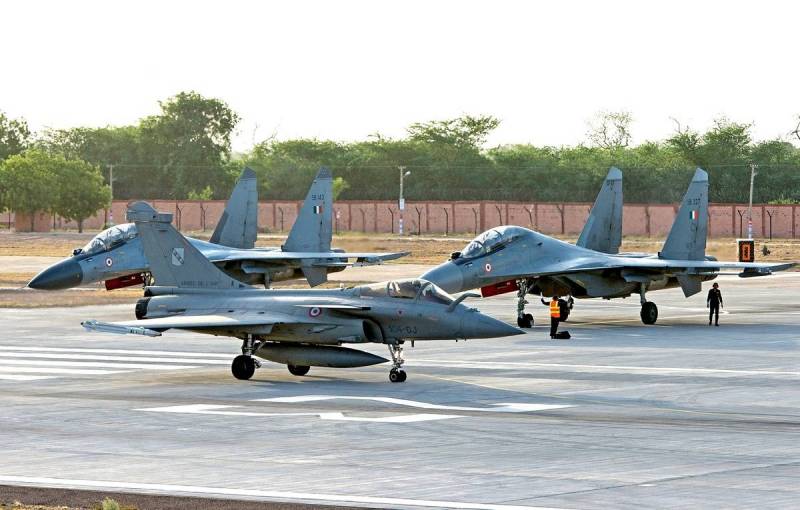 Unpleasant for Russia news came from India. New Delhi preferred our fourth-generation French fighter Rafale to our Su-30MKI. The Indian edition of The Economic Times cruelly rode our planes. What is this, "revenge of the Sikhs" for the "tricks" of Moscow with Pakistan or banal bargaining?


The positions of Russian weapons are traditionally strong in the Indian market. Thus, India’s fleet consists of approximately 80% equipment domestic production. In the sixties, this country began to acquire MiG-21 fighters from the USSR, and after that it began their licensed production, collecting more than six hundred. Their modernized versions to this day are in the service of the Indian Air Force. There are about 120 of these winged cars. New Delhi also acquired the MiG-29 and MiG-27.

It should be noted that India did not allow the emergence of a monopoly on the part of Russia. In addition to Russian aircraft, she bought the French Mirage 2000 (H / TH) and the Franco-British Jaguar. New Delhi sought to diversify supplies as much as possible on the basis of international cooperation, as well as to localize the production of aircraft. This is especially evident in the example of the Su-30MKI fighter. The last three letters indicate: multi-purpose, commercial, Indian.

Despite its Russian origin, this aircraft is a product of cooperation of several countries - Russia, India, France and Israel. The last three countries supply electronic equipment, navigation and display systems, and on-board computer systems. Having received them in service in the nineties, New Delhi achieved air superiority over Islamabad. In the two thousandths, a phased localization of Su-30MKI production in India began. First there was a “screwdriver assembly”, then only a purchase of materials and raw materials from which the entire production cycle was already carried out on site. In addition, the Indians received a license to manufacture the AL-31FP engine designed for Su-30MKI fighters.

The Russian fighter has become the main "workhorse", every year the Indian Air Force fleet is replenished by 12 pieces. So why did these fighters suddenly come under such criticism?

Indian edition claimsthat the flight range of Rafale significantly exceeds the Su-30MKI, which is why the “Frenchman” can fly 5 sorties a day, and the “Russian” can do only 3. In reality, airplanes of different designs have both stronger strengths and competitors weak. Rafale has a combat radius of 1389 km, Su-30MKI - 1500 km. The practical ceiling of the first is 15 meters, of the second aircraft - 240 meters. Finally, a Russian fighter is cheaper to buy and maintain.

As for the argument about the relatively higher accident rate of the “Russian”, the following factors must be taken into account. Firstly, statistics are determined by their large number in service. Secondly, there are questions to the level of their maintenance. Thirdly, every tenth plane in the Indian Air Force was "shot down" by ordinary birds living in huge landfills near cities, near which there are airfields. Finally, in emergency situations, Indian pilots prefer not to fight to save the aircraft, but to eject. Hence the statistics.

In fact, the Su-30MKI in version 4 ++ is able to cover the skies of India for a couple of decades. “Hit” on him in the Indian press, most likely, is associated with two factors. New Delhi did not like the fact that Russia favored Pakistan's interest in acquiring modern weapons. The Pakistani Prime Minister said:

Yes, we are looking at weapons from Russia, and I know that our military is already in contact with the Russian military.

In addition, the Indian side is clearly not against promoting Moscow for big discounts. The HAL concern announced the termination of production of the Su-30MKI with the reservation “in the absence of new orders” from the next year. Apparently, Russia is waiting for proposals that India will not be able to refuse.
Ctrl Enter
Noticed oshЫbku Highlight text and press. Ctrl + Enter
We are
Ukraine from the inside: traitors, curators and those who watch from the Kremlin
Ten "defeats" of Putin
Reporterin Yandex News
Read Reporterin Google News
Ad
The publication is looking for authors in the news and analytical departments. Requirements for applicants: literacy, responsibility, efficiency, inexhaustible creative energy, experience in copywriting or journalism, the ability to quickly analyze text and check facts, write concisely and interestingly on political and economic topics. The work is paid. Contact: [email protected]
12 comments
Information
Dear reader, to leave comments on the publication, you must to register.
I have an account? Sign in