F-35: What future awaits the most failed US defense project 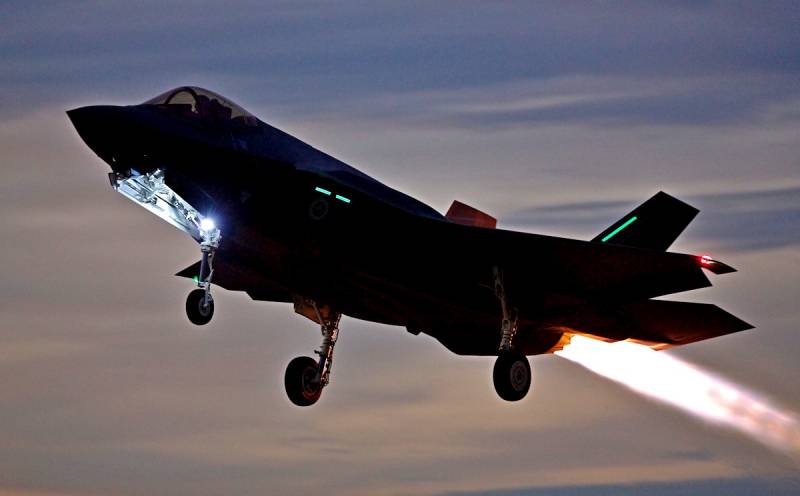 This week was marked by a victorious statement by the Pentagon: the problem with the exclusion of Turkey from the program for the creation of multifunctional fifth-generation fighter-bombers has been resolved. By 98.8%, according to Lieutenant General Eric Fick, who is responsible for the F-35 program in the military. We can do without “traitors”, since there are plenty of people willing to supply components for this aircraft in other countries!


However, even this news can hardly sweeten the "pill" which is extremely unpleasant for Lockheed Martin and Pratt & Whitney corporations: the United States Defense Department, after another series of tests, recognized their "newest and most perfect" brainchild unsuitable for mass production. This was stated by US Deputy Secretary of Defense Ellen Lord. How so ?! Years and years of development, "tweaking" and improvements, tens, if not hundreds of billions of dollars, "thrown" into all this - and is it not good? What is the future of the most, perhaps, the most ambitious and advertised project of the American "defense"?

“Miracle of technology” with developmental delays

This offensive definition, by the way, was not what I came up with. The fact that the F-35 program "is constantly faced with development problems," which, in fact, causes delays in making the final decision on the large-scale production of a fighter-bomber for the needs of the US armed forces, was announced at the Pentagon. They supposedly wholeheartedly counted on the fact that they would "bring to mind" the combat vehicle by the end of this year, but this, alas, did not happen. Now the next "attempt" is postponed for a year, at least. Before January 2021, this issue would not be raised for sure. At the same time, I recall, the operational tests of the F-35 were supposed to start in September 2018, but only began in December. They planned to complete this summer, but the process dragged on for an additional six months. Now here is the new “timeout”, for the whole year. No, something, it’s hard to see something wrong with this “ultramodern” ... However, Lockheed Martin doesn’t interfere with the cheerful report that “F-35 is fully ready for serial production and can satisfy growing demand on the part of customers. ” That is, that is - 430 of these combat vehicles have already been produced and delivered to customers. The company just wants to increase the “plan for the shaft” - this year it is planned to sell 131 fighters, in the future - already 140, and by 2023 they want to increase this number to 160 aircraft per year. Well, when considering unit prices, the aspirations are understandable ...

That's just about "full readiness" there are doubts. And let the corporation with the most honest eyes say that all the “serious technical problems” of the F-35 have already been eliminated, and the remaining shortcomings “have no critical value”, how much this corresponds to reality is a big question. The F-9A disaster on the coast of the Land of the Rising Sun on April 35 this year, led by 41-year-old Japanese Air Force major Akinomi Hosomi, essentially remained a "serious and gloomy secret", a black spot on the entire program of these fifth-generation fighters. Despite the fact that every fragment, every part of the crashed car was studied by meticulous Japanese literally under a microscope and almost at the molecular level, and every second of the fatal flight was analyzed in the most thorough way, it was not possible to come to an unambiguous conclusion regarding the causes of the accident. In the end, as is usual in any incomprehensible situation, everything was blamed on the “pilot error”. He supposedly was “spatially disoriented” and for 16 seconds allotted to him, he did not understand that he was rushing to the lead waters of the Sea of ​​Japan from a height of only 5 kilometers at a speed of 300 meters per second. Here are just so many points of this version directly contradict. For example, the absolutely calm voice of a pilot reporting to the earth about his movements and his perfectly correct actions - right up to the last, fatal seconds. Yes, and Hosomi was not a "green" youth, but an experienced pilot, the best of the best. The maneuver performed by him: “controlled left descent”, which freed up space for the next combat vehicle to the category of extremely complex or causing excessive overloads, also cannot be attributed. No, something doesn’t add up here.

Rather, it seems to be true the timidly speculated assumption that with the F-35 interface, stuffed with many multifunctional HUD displays and other "bells and whistles", they are still too much too smart. Sometimes this is worse than failing, especially in aviation. In any case, the JASDF (Japanese Self-Defense Forces) experts conducting the investigation two months after the incident issued an official report stating that they had no complaints about the “mechanical condition” of the aircraft. Therefore, the procurement of this "miracle equipment”Tokyo is likely to continue. However, there is a question that relates, rather, to the sphere politicalrather than purely military. Apparently, in Washington they took the Japanese, who at one time decided to purchase hundreds of F-35Bs in addition to the already ordered four dozen F-35As, as a kind of "rich Pinocchio." This is probably why they quadrupled the price for staying on its territory of American combatants and bases on which they are freely located. That is, they asked for this dubious “pleasure” of $ 8 billion a year instead of the current two! Diplomatic Japanese rated these "Wishlist" as "unrealistic." Well, their restraint and self-control have long been known to everyone. Others would have sent a multi-story building ... However, there is no doubt that after such a “collision” in Tokyo, further military cooperation with the United States may be thoughtful. At least about its scale and price. Moreover, regarding the prospects of deploying new American medium-range cruise missiles in Okinawa, they have already expressed themselves: “Do not even think!”

The battle for heaven or for markets?

However, we were somewhat distracted from the topic, in fact, F-35. According to experts in the field of military aviation, the problems that prevent Lockheed Martin from finally “grabbing” the coveted state order for almost five hundred military vehicles that the United States intends to equip (and is already equipping little by little) not only the Air Force and Navy, but even the National Guard, not at all "insignificant." And they are associated with the most important options - fighter controllability in complex, and, especially, critical situations. Whatever the F-35 manufacturers are trying to talk about its “real combat use”, this only boils down to the IDF’s air piracy, which inflicts vile stealth strikes on targets in Syria on these aircraft modified in Israel. These "supermodern" have not yet been in a single air battle, and they have not encountered serious air defense systems either. And just here there is one more, extremely delicate moment. As you know, the main "highlight" of military vehicles ranked among the "fifth generation", and, above all, the F-35, a priori declared by the United States the best in this class, is their "invisibility." Well, or at least “stealth” for enemy radars. However, it is precisely in this direction that the Americans, who are rushing with their "stealth", as with a written shell, may be waiting for a former bummer. In any case, in China, which has every reason to rank the US Air Force as the most likely potential adversary, they have already issued a statement that can be considered sensational. According to Wu Dzhianki, who is engaged in scientific research at the China Electronics Technology Group, one of the world leaders in the field of military electronics, his team managed to create a radar that does not leave stone on stone from the notorious “invisibility”.

Without going into too much technical details, let me remind you: in fact, the stealth technology is largely based on the fact that low-frequency radars are capable of detecting absolutely any targets, cannot be fully used when pointing the same missiles at them. For this, just high-frequency radars are suitable, which can be fooled by "invisible aircraft." However, the Chinese comrades, according to their claims, managed to create a system using combined frequencies of both ranges. If this is true, then no combat vehicle will be able to overcome such a screen, what coating should not be applied to it. Moreover, according to the developers, the novelty is far from being at the stage of an idea or paper calculations with drawings. They have already managed to deploy an antenna complex occupying hundreds of square meters, capable of holding airspace under full control in all directions and at a very large distance. There is every reason to believe that the statement made is fully true. This is the Chinese. They - they can ... And then what will all the “super-advanced” technologies and “gadgets” cost up to 35 F-35s to absolutely unbelievable heights? In fact, the Pentagon’s stubborn reluctance to get involved with this “miracle of technology” on a too global scale demonstrates that the merits of this fighter are at least greatly exaggerated. And the price ... Nevertheless, Washington, with tenacity worthy of a better application, forces all its allies to purchase it. One gets the impression that for a long time having figured out the true value of this combat vehicle, the Americans now want to “repulse” unsuccessful investments solely through the export of F-XNUMX. If necessary, then “voluntary-compulsory”.

In any case, the real blackmail of states that have expressed a desire to acquire non-American-made combat aircraft, primarily from Russia, continues to remain for the United States the favorite means of "competition". The freshest example is Egypt, to which Washington is "twisting its arms" for its intentions to acquire the Russian Su-35 in every conceivable and unthinkable way. First, US Secretary of State Mike Pompeo made a statement that he “expects” that Cairo will refuse from our fighters. They didn’t heed ... I had to scribble an official letter to Colonel-General Muhammad Zaki - the Egyptian Minister of Military Industry and Defense. The letter, of course, put forward the boorish demands of the Su-35 not to buy in any case and listed all those troubles that the country of the pharaohs would incur on itself, showing disobedience. However, this demarche did not seem to produce the desired effect. Otherwise, why would Pompeo's assistant political and military affairs Clark Cooper at the 16th Dubai Airshow 2019 international air show once again begin to curse about the "imminent threat of US sanctions" for Egypt all on the same occasion? The most interesting thing is that, often, trying to "cheat" Russia, the Americans reveal their own problems and bottlenecks. So, one of the military experts there, Joseph Trevitik, recently began to discuss the “inability” of our country to independently produce the Su-57, as a justification for his own more than dubious conclusions, citing ... “Russia's constant search for buyers for this fighter "! No comment ... And then what about the United States itself, imposing its F-35 on the world and stubbornly not wanting to mass-produce and purchase it for their own weapons ?! Here, most likely, the simplest popular proverb will be most appropriate: "Whoever hurts something, that says that."
Ctrl Enter
Noticed oshЫbku Highlight text and press. Ctrl + Enter
We are
How F-35 deprives Americans of advantages in the air and at sea
F-35: how to break the wings of the "American dream"
Reporterin Yandex News
Read Reporterin Google News
Ad
The publication is looking for authors in the news and analytical departments. Requirements for applicants: literacy, responsibility, efficiency, inexhaustible creative energy, experience in copywriting or journalism, the ability to quickly analyze text and check facts, write concisely and interestingly on political and economic topics. The work is paid. Contact: [email protected]
12 comments
Information
Dear reader, to leave comments on the publication, you must to register.
I have an account? Sign in