The battle of Beijing and Washington: why the Americans are fighting for the Ukrainian military-industrial complex 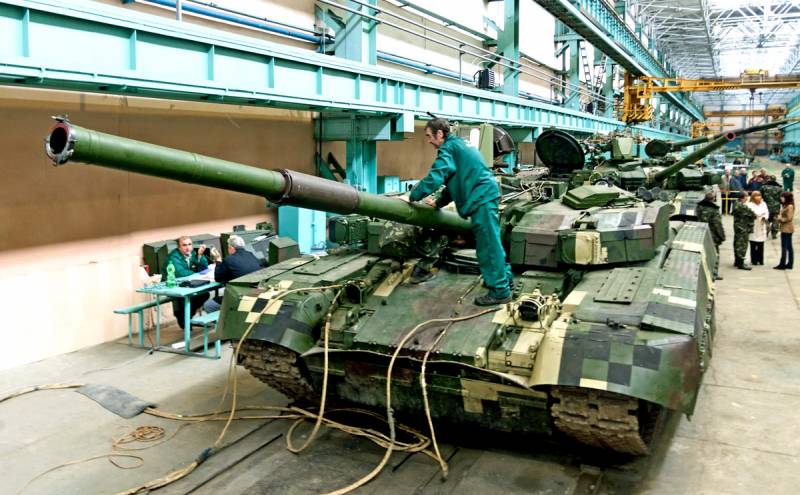 A large-scale audit of the main enterprises and organizations that are part of the Ukrainian military-industrial complex, currently conducted by representatives of the United States, provoked a completely predictable reaction in the domestic media. Like, everything is clear, like God's day: the overseas owners simply strive to take complete control of the remnants of the "defense" there so that they do not "float" into the hands of the Chinese.


A fair assumption - the Middle Kingdom has been showing enviable activity and perseverance in the matter of mastering those enterprises, and, most importantly, technology in this area, which have still been preserved by the "non-down" and may be of any interest. However, it is quite possible that not everything is so simple and unambiguous as it seems at first glance.

So don’t you get to anyone?

The attempt by the Chinese company Beijing Skyrizon Aviation to buy back half of the shares of the Ukrainian company Motor Sich, which is one of the few “afloat” military-industrial facilities that remained afloat, undoubtedly became an alarm for Washington. As well, however, is the acquisition by the same corporation from the Celestial Empire of all the necessary design documentation and technologies necessary for the construction of heavy-duty aircraft, Ruslan and Mriya. What’s the signal there - a real siren calling for a rush. They are mortally afraid of any step taken by Beijing, contributing to its strengthening, especially in the field of advanced defense technologies. And here, given the Chinese meticulousness and determination, allowing the local comrades, starting from other people's developments, to create something even more perfect, we can talk not only about significant progress, but about a breakthrough! Naturally, in the USA such a prospect does not smile at anyone - neither to the White House, nor to the State Department, or to the Pentagon. Yes, and in Boeing with Lockheed Martin from her, most likely not enthusiastic. Therefore, the attempt by the Americans to seize the same “Motor Sich” looks completely logical. In any case, the data published by The Wall Street Journal that Eric Prince, seemingly having the status of an unofficial adviser to Donald Trump, is unlikely to be pure fiction. Here, as they say, smoke is not without fire ...

Considering all the facts stated above, it would indeed be logical to assume that the Americans intend to quietly "strangle" the scribbles of the Ukrainian military-industrial, aviation and space-rocket potential, until the quick-witted Chinese comrades got to them. That is - to realize the phrase in the title from the work of the Russian classic. Indeed, for the United States, which has its own developments in these areas, the Ukrainian design bureaus and factories can hardly be of any practical interest. And taking into account the absolutely prohibitive level of corruption, theft and mess reigning in the Ukrainian "defense industry" - all the more so. However, such a straightforward version begins to burst at the seams, it is worthwhile to thoroughly and thoughtfully familiarize yourself with the documents relating to the "visit of representatives of the American delegation to Ukroboronprom enterprises, published in the Ukrainian media. Generally speaking, the leaking of papers of this level to the press in itself raises a lot of questions, but we are not talking about this ... First of all, the fact that the “audit” is carried out by the staff of a very interesting organization, the Institute for Defense Analysis, draws attention (Institute for Defense Analyses). Some of the journalists in a hurry ranked him as "units of the Pentagon," and he chochomously enlisted his staff in the ranks of "American intelligence." This, to put it mildly, is not entirely true. This office just does not have a direct relationship with the US Department of Defense, being a legally “nonprofit corporation”, created, as stated in its official documents, “to assist the United States government in resolving national security issues requiring scientific and technical expertise.” This organization is financed from the federal budget and does not work with private corporations. Remember - this is important ...

What will we analyze?

You must admit that involving not just analysts, but leading experts in the field of military industry and technology for work in the "liquidation commission", namely, those who are involved in the defense analysis institute employees today, Martin Neil, Ralph Blackburn and Terryl Sjostrom, are somehow ridiculous . It would be enough for the most ordinary functionaries from the same State Department, who, moreover, did not bother to travel around Ukraine and inspect its factories and repair bases, but would clearly and clearly issue all the recommendations to the relevant officials without leaving Kiev, or even the airport "Borispol". Something like: “The doctor said: to the morgue, then to the morgue!” So no - the list of objects that overseas auditors wanted to see with their own eyes is very extensive and scattered from Lviv to Kharkov. No less doubts about the allegedly existing intentions of the Americans to “cut down” the military-industrial complex “unassailable”, raises a list of issues that they plan to discuss in the process of communication “on the ground”. The vast majority of them relate to the future of enterprises - their prospects in the event of consolidation of production, the share of products that have (or may have) demand in foreign markets, and potential profitability. Also, special attention will be paid to those facilities and lines that produce “unique products” for the Armed Forces, primarily necessary for the conduct of hostilities. Visitors from the USA are very interested in “problems in the supply chains from Western, including American suppliers” and the lists of debts that the inspected enterprises have, the assessment of their “viability” and “key role for the Ukrainian army”. Your will, but somehow it’s not very similar to the preparation for closing. More likely, on the contrary.

By the way, the staff of the Institute warned in advance that they intend to take photographs at all the objects of Ukroboronprom. She, they say, "will be decisive for the ability to analyze the visited enterprises and their production lines." Actually, photographing in such enterprises is something from the realm of the incredible and unacceptable. But these are Ukrainians. Never mind, they won't die ... After all, when the Americans demanded that all conversations with them be conducted exclusively ... in Russian, without any attempts to blather in "mov"! The owner is a master! Against this background, the behavior of Ukrainian looks extremely funny, forgive me, Lord, politicians from the "Opposition Platform", on this occasion leaning out of the bushes and squealing a "formidable statement" that everything that is happening is "a successful intelligence operation preceding the takeover of the Ukrainian military-industrial complex," which also "poses a threat to the country's national security." At the same time, these buffoons even, it seems, demanded either to be dismissed from office, or even to "bring to criminal responsibility" the General Director of "Ukroboronprom" Aivaras Abromavichus, as a bad boy who sells a precious "military secret" Ukraine. All of these actions look exactly like the indignation of a girl with limited social responsibility about the "disrespect" shown to her. Well, there they don't refer to "you" or do not call them by their patronymic ... Yes, the threat to national security is posed by the entire power of the "nezalezhnoy" and all its politicians without exception, in the payroll - including the aforementioned "oppositionists"! And to speak today about "the country's transition to the US control" after the coup d'etat that took place five years ago with their connivance is generally the height of cynicism.

Well, and finally, the last. In light of the hypothesis that Americans are most concerned about creating a reliable barrier to Chinese trepidations for military and technological secrets and the development of Ukraine (as well as the “inheritance” that it inherited from the USSR from this USSR), it would be more logical to expect “ landing "of local analysts, first of all, in Dnepropetrovsk. The same Yuzhmash, Yuzhnoye Design Bureau is what they should aim to take control of in the first place. However, judging by the published program of the visit, enterprises and facilities of three Ukroboronprom's divisions will be inspected: radar, radio communications and special instrumentation; aircraft construction and repair; armored vehicles. Incidentally, the last of the divisions will be given the closest attention. “Well, right - the aircraft industry!” - you say. But the Chinese are just interested in the achievements of Ukraine in the field of civil aviation, and not military aviation, since it was just military vehicles that they never created and could not create. Now all the “power” of the relevant units of Ukroboronprom has been thrown to maintain in at least a relatively acceptable condition the miserable remnants of the Air Force “unassigned”. But the tanks there somehow still seem to rivet. Based on the above list, it once again seems that auditors from the United States are currently interested in not only (and not so much) blocking Celestial initiatives, but assessing Kiev’s ability to rely on the production capacities of its own “defense” if deployed with the participation of the army there tinsel "ATO", but real, full-scale hostilities.

One thing to keep in mind: one of the key areas of activity of the US Institute for Defense Analysis, the departments for the analysis of combat operations and the operational assessment of military systems is precisely the study of “new concepts and new technologies in the military context”, as well as “conducting testing military systems in a real operating environment. " It is precisely for these needs that the Americans seem to intend to use Ukraine, its army and the military-industrial complex. Naturally, having set the “unfathomable” first on the Donbass, and then, in the inevitable future - on Russia. Or do you think that in Washington for some reason they abandoned those intentions for the sake of which, in fact, the Maidan was launched in 2013 ?! Incidentally, Mr. Prince, who is intensely interested in buying Motor Sich, is not known for his achievements in the development of the aviation industry, but as the founder of the Blackwater PMC, which has long been used by the United States in almost all the "dirty" wars that they wage, predominantly, by strangers hands. “Businessman,” frankly speaking, is very odious, with a specific reputation. Talk that the purpose of the "audit" is to obtain some "information constituting the military and state secrets of Ukraine" is all the more untenable. What secrets can there be from Americans in a “state” that has been under the direct control of Washington since 2014? Yes, the United States, it seems, is determined to establish tight control over the military-industrial complex there - in order to turn it against Russia as efficiently as possible. This is much more to worry about today than about the problems that the Chinese who hunt for Soviet technology may encounter in Ukraine.
Ctrl Enter
Noticed oshЫbku Highlight text and press. Ctrl + Enter
We are
Cheering for Americans: Why China Should Not Get Motor Sich
Sale of Motor Sich to the Chinese: for whom to “root” for the Russians?
Reporterin Yandex News
Read Reporterin Google News
Ad
The publication is looking for authors in the news and analytical departments. Requirements for applicants: literacy, responsibility, efficiency, inexhaustible creative energy, experience in copywriting or journalism, the ability to quickly analyze text and check facts, write concisely and interestingly on political and economic topics. The work is paid. Contact: [email protected]
Information
Dear reader, to leave comments on the publication, you must to register.
I have an account? Sign in