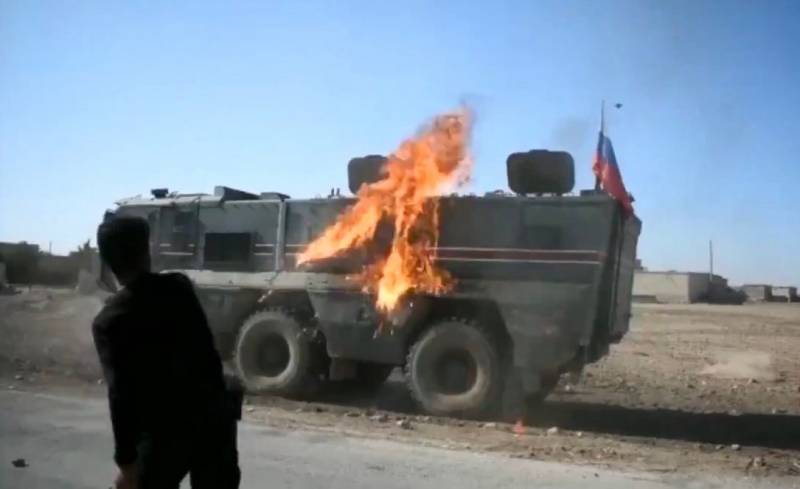 The Kurdish population of the border regions of Syria continues to attack the military police patrols of the Ministry of Defense of the Russian Federation, each time increasing the degree of these attacks.


If at first stones were used during the attacks, then later the sledgehammers went into action, with which the attackers tried to harm the armored vehicles.

But the aggressive population of the region did not stop there either. One of the latest videos on the net captured an attack on a patrol during which the Molotov cocktail was first used.

One of the attackers threw a Molotov cocktail at the Typhoon armored car. Despite the fire that broke out on the armor, the Russian military did not respond to the provocation and proceeded further without the use of weapons.


It is noteworthy that the attackers not only know the time taken by Russian patrols, but also prepare for it.

There is no doubt that their actions are coordinated by the special services of those countries that are not interested in the onset of peace in this region, and the ultimate goal of provocations is to force the Russian military to use force to later present it to the media as evidence of cruelty towards civilians.

The military police of the Ministry of Defense of the Russian Federation have already managed to prove their high professionalism in Syria. However, what if the next time an RPG is in the hands of the attackers?
Ctrl Enter
Noticed oshЫbku Highlight text and press. Ctrl + Enter
We are
Break antennas, break windows: Kurds attacked the Russian patrol
"Curvy, get out of Poland!"
Reporterin Yandex News
Read Reporterin Google News
36 comments
Information
Dear reader, to leave comments on the publication, you must sign in.