"Unions" are no longer needed: when Roscosmos himself will switch to "trampolines" 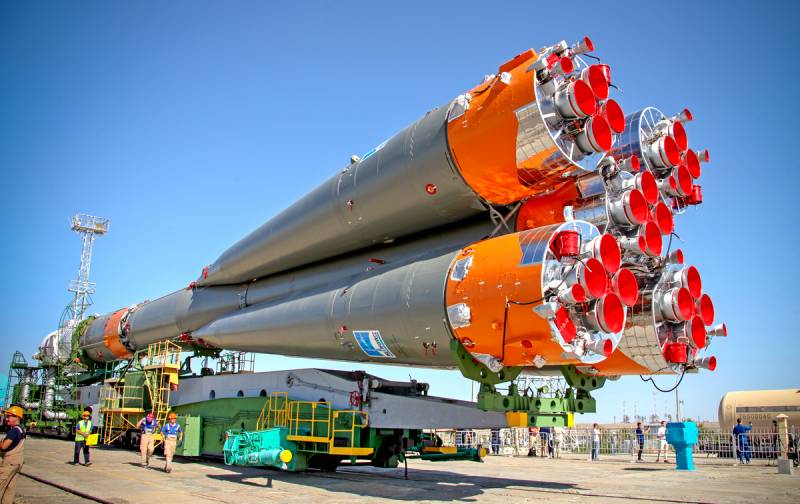 While Roscosmos is shaken by new corruption scandals, the United States is preparing at an accelerated pace to end its "vicious practice" of dependence on our country in the matter of delivering its astronauts to the ISS. With what will our cosmonautics remain in the hands of frank amateurs?

Before the spring of next year, we will see how an American astronaut on an American spaceship from American territory starts in space.

Moreover, the second man in the White House promised that the Americans would return to the moon in about five years. Sympathy among voters for the Trump team should be added by the fact that a woman, of course, also an American, will set foot on the surface of the earth's satellite.

Unfortunately for us, Pence has every reason to make such high-profile statements. Despite a number of technical problems, the United States did not waste time, and soon they will immediately receive two seven-seater spacecraft. As usual, they did not put all their eggs in one basket and financed two projects in parallel.

This has been a long time. Having abandoned the expensive Shuttle program, the Americans provided the space shuttle function to Roskosmos. Initially, one ticket to the ISS cost the United States $ 20 million, but the "monopolist" began to gradually raise its price tag, bringing it to 80 million for one astronaut. It is estimated that since 2011, Washington has paid Moscow $ 3,9 billion.

It is clear that this attraction of unprecedented generosity could not continue indefinitely. After the events of 2014, relations between our countries began to deteriorate sharply. The Americans did not understand Dmitry Rogozin’s subtle joke “about trampolines” and allocated a lot of money to two companies: SpaceX received $ 2,6 billion, and Boeing - $ 4,2 billion. And what have they received over the past five years?

Strictly speaking, the CST-100 Starliner project from Boeing, which received a grant from NASA, started earlier in 2010. It was supposed to fly in 2014, but the space agency made changes to the project, which moved the deadlines. From four people his crew was increased to seven. In unmanned mode, it will fly in December this year, with the crew - in early 2020. When testing the emergency rescue system, one of the three parachutes of the descent vehicle did not open, however, it was able to land safely, which was counted as success.

There were problems with direct competitors from SpaceX. Due to a serious accident, Dragon-2 has not yet received a certificate for flights from NASA. But we must be aware that in the end the company will achieve its goal. The Americans will receive the second universal ship. Two versions are provided: unmanned cargo and manned. The latter is able to take on board all the same seven crew members.

Thus, any of the two new ships that the United States will receive in the near future will more than double the capacity of our outdated and close “Unions”. This means that Roscosmos is guaranteed to lose the dust-free business of delivering astronauts to the ISS and the opportunity to joke about trampolines.

Things in the domestic state-owned corporation under the leadership of the "pranksters" are not going in the most brilliant way, which we discuss in detail told earlier. The Clipper project was closed, the Federation was shut up. The entire team that worked on the Russian ship quit the Energia corporation, which clearly does not indicate a healthy working atmosphere. Now they’re embarrassed by the idea of ​​a certain private space company that will take the achievements of Roskosmos according to the Federation in order to create the Argo spacecraft on their basis. Dealers are going to make good money on launches. It is interesting that among the founders of the company there are top managers of structural divisions of the state corporation.

As if after all these “effective managers” and no less than “effective private owners” we ourselves did not have to go “to trampolines” ...
Ctrl Enter
Noticed oshЫbku Highlight text and press. Ctrl + Enter
We are
To deceive everyone: the USA played a great game against oil
Peace enforcement operation. Russia inflicts a preemptive strike on Kiev
Reporterin Yandex News
Read Reporterin Google News
11 comments
Information
Dear reader, to leave comments on the publication, you must sign in.