How one misfire “devalued” the Russian nuclear triad

November 16 2019
13
In the context of the beginning of the Cold War-2, amid the withdrawal of the US and Russia from the INF Treaty and a similar threat to START-3, close attention was drawn to the nuclear arsenal of both countries. Therefore, any problems and failures in this area are actively beginning to be used by the opposite side for propaganda purposes. 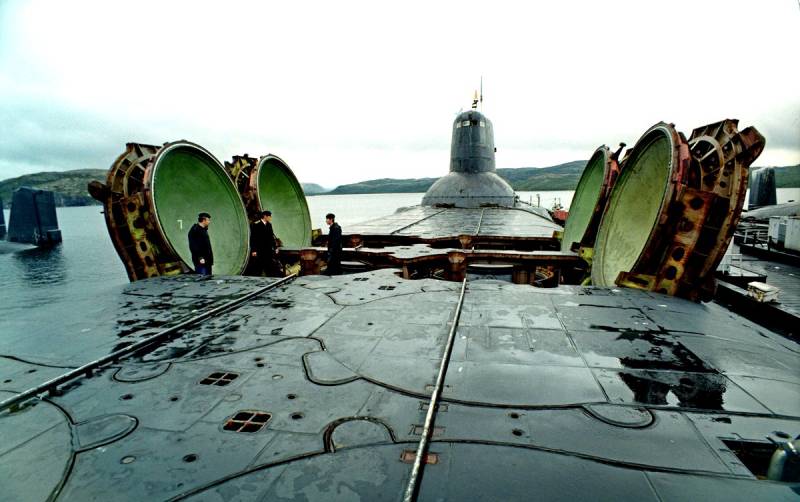 At the end of October, Russia hosted the Thunder-2019 strategic nuclear command and staff exercises, in which President Putin personally took part. Ведомости report that an emergency situation occurred: the K-44 Ryazan submarine cruiser, instead of two R-29R ICBMs, was able to launch only one missile at a target at the firing range. According to the publication, the obsolete missile did not come out of the launch shaft, and the nuclear submarine returned to the base with it.

This unpleasant incident was very radically interpreted in the West. Today, Poland is considered perhaps the most loyal US ally in Europe. The Warsaw Institute (an analytical organization advising the Polish government) made a very far-reaching conclusion:

At the moment, not everything is working properly in the Russian nuclear triad, and Putin cannot be XNUMX% sure of it in the event of a potential conflict. It can be expected that now the Kremlin will strive to accelerate the modernization of Russia's nuclear missile potential.

In general, the statement is quite bold. The fact is that the very outdated weapons failed the exercises. The Ryazan nuclear submarine is a submarine of Project 667BDR Kalmar, the last in its series, still on alert. All others are written off or are in the line for disposal. The same can be said about sea-based missiles R-29R. Adopted in 1977, they have been in our nuclear arsenal for over 40 years. Their resource is already almost exhausted, test launches are needed just for its extension. Now the obsolete R-29R replaced by Sineva ICBM.

In other words, a “misfire” could happen, and it’s good that she was only one. Similar problems with old weapons occur in potential opponents in the face of the United States and Great Britain. For example, since 1989, Trident-2 American missiles recorded four cases of unsuccessful launches and one partially successful. In this case, the Americans only check the exit of missiles from the mines, blowing them up in the air. That is, the accuracy of hits of old missiles is not de facto tested. In 2016, the British had problems with Trident 2. The missile they launched lost control and flew toward the Allies towards Florida. At the same time, the self-liquidation regime did not work at all, it was lucky that she herself fell into the ocean.

There are several plane crashes with American strategic bombers B-52. The last time the "old man" completely fell off one of eight engines. Minuteman 3 ground missiles also raise questions. Having taken up duty in the seventies, they were repeatedly modernized in order to extend the resource. Moreover, every fourth test run is a failure or partially successful.

It is significant that no one shouts that the American nuclear arsenal is rusty junk. Everyone has problems with old weapons, but for some reason only “misfires” in Russia allow us to make definitive conclusions. At the same time, the West ignores the fact that all the goals at the Thunder 2019 exercises were successfully hit. Nuclear submarines, ships, planes, and Iskanders were shot.

But talking about this in the Western press is boring. Only one-time “misfire” is interesting.
Ctrl Enter
Noticed oshЫbku Highlight text and press. Ctrl + Enter
We are
World on the brink of nuclear war: Russia has achieved strategic superiority
Ten "defeats" of Putin
Reporterin Yandex News
Read Reporterin Google News
Ad
The publication is looking for authors in the news and analytical departments. Requirements for applicants: literacy, responsibility, efficiency, inexhaustible creative energy, experience in copywriting or journalism, the ability to quickly analyze text and check facts, write concisely and interestingly on political and economic topics. The work is paid. Contact: [email protected]
13 comments
Information
Dear reader, to leave comments on the publication, you must to register.
I have an account? Sign in