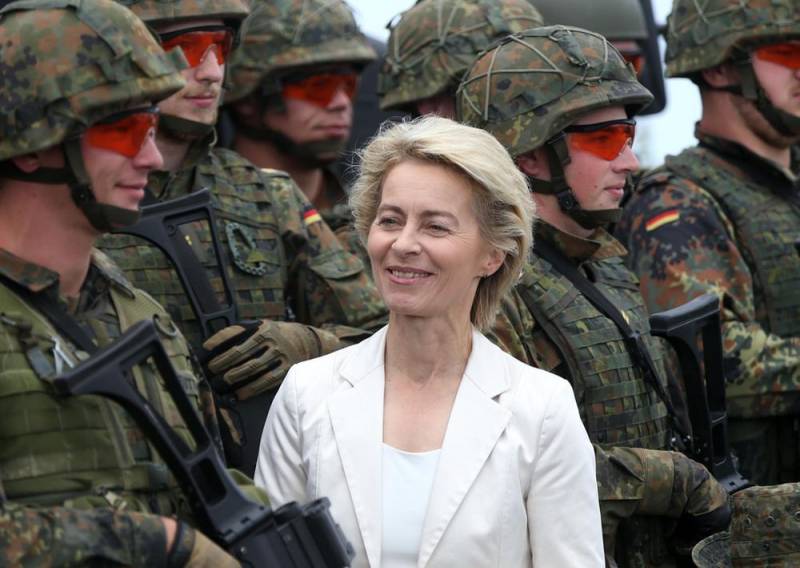 In December 2019, German Ursula Gertrude von der Leyen, who was appointed to this post by the European Council (Heads of Member States) on July 16, 2019, will take up her duties as chairman of the European Commission (EU government, EU). She is the first woman in EU history in this post, before that she was the first woman in German history to become Minister of Defense (2013-2019). At the same time, a stunning career growth was provided to her by a loud pedigree and no less loud Russophobia.


A von der Leyen biography published by German publisher Piper Verlag GmbH (authors of the book: Focus journal Berlin correspondent Daniel Goffart and German government press officer Ulrike Demmer) describes how she, in 2014, as head of the German Ministry of Defense, proposed to the committee Bundestag Defense, send the Bundeswehr paratroopers to the east of Ukraine to take control of the border with Russia in order to "stabilize the recently negotiated truce." Then she said that “the Bundeswehr is preparing to participate in two foreign missions”: to send two reconnaissance drones such as Luna along with 50 armed military personnel to guard them in Ukraine. According to von der Leyen, they had to “control the border with Russia and the training of the Iraqi armed forces. Moreover, these statements were made without the knowledge of the German Foreign Ministry and caused outrage among Frank-Walter Steinmeier, the then Foreign Minister of Germany (now holds the post of Federal President of Germany).

Steinmeier was terribly angry ... Shortly after the PR speech by von der Leyen, the Foreign Minister took part in a meeting of the working group on international and defense policy SPD faction in the Bundestag and abruptly scolded his colleague in the office. Steinmeier considered it problematic that public speculation was being conducted on armed participation in Ukraine. This complicated the negotiations. According to the meeting participant, he never saw him (Steinmeier) so angry
- stated in the material.

After that, the German Foreign Ministry officially announced that such actions “contradict international law”, after which, conversations about the mission with drones and paratroopers “were no longer discussed”.

The book says that von der Layen is not only a supporter of sanctions pressure on Russia, but also more stringent measures against Moscow. It describes how she reacted to the annexation of Crimea to Russia. She stated that "for alliance partners that are on external borders, it is now important for NATO to demonstrate a presence." Then it was regarded by the public as a proposal for the introduction of troops and "caused a storm in a fragile international situation." After which, von der Leyen hastened to declare that she had in mind "the intention to guarantee security for the alliance partners."

The book notes a painful reaction and resentment of von der Leyen to criticism. After all, every time she interpreted her oversights in a peculiar manner - she was allegedly not understood in this position, because she was a woman. However, in NATO a whole company of such.

It must be recalled that Ursula Gertrud von der Leyen, nee Albrecht (08.10.1958/XNUMX/XNUMX), is married to Heiko von der Leyen, professor of medicine, director of a business development company (medical equipment), which comes from the ancient earl genus Leyen (Layen). She herself is the daughter of Ernst Albrecht, the former Prime Minister of Lower Saxony and the head of the Directorate General for Competition of the European Commission. So the family run continues. In addition, Ernst Albrecht is a descendant of Louise, the daughter of Baron Lev Gerasimovich Knop from Bremen, who was one of the most successful entrepreneurs in the Russian Empire in the XNUMXth century (he traded in cotton and owned the Krenholm chintz manufactory).
Ctrl Enter
Noticed oshЫbku Highlight text and press. Ctrl + Enter
We are
Head of the European Commission: We must communicate with Russia from a position of strength
The head of the German defense ministry accused Russia of striving to ruin the EU
Reporterin Yandex News
Read Reporterin Google News
23 comments
Information
Dear reader, to leave comments on the publication, you must sign in.