Americans Returning to Syria: Is the US Preparing a Trap for Russia? 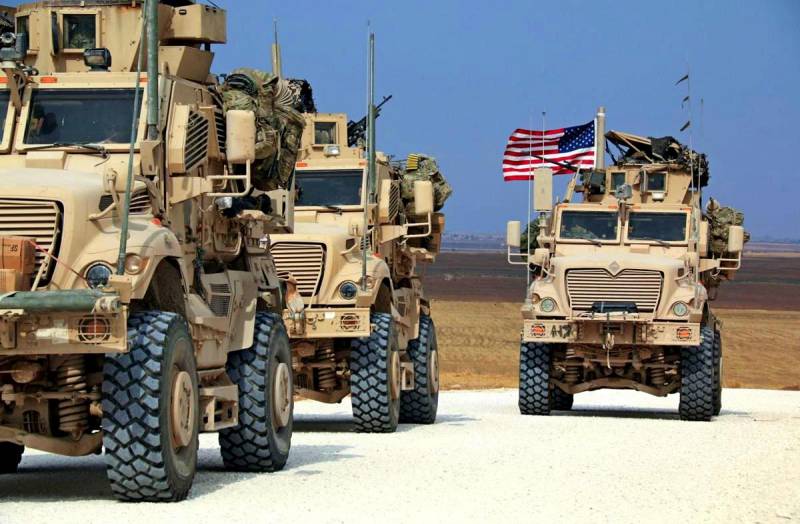 It is very likely that after a series of rather serious foreign policy debacles, Washington is determined to take revenge, again trying to prove to the whole world, "who is the boss in the house." The coup d'etat in Bolivia, which has a very clear star-striped "lining" - is just one example. Most likely, the United States intends to inflict the main “counterattack” in the same place where it suffered the most offensive and high-profile defeat - in Syria. Moreover, it is in this region that they have a chance to prettyly annoy not only Russia, but also another state that has recently given the Americans many reasons for a serious headache - Turkey.


Based on the already announced plans and intentions of the United States, as well as their real actions, the plan, the implementation of which has already begun, has at least three levels. Let's talk about each in detail.

In fact, Donald Trump’s provocative statements that he “likes” Syrian oil, and therefore he intends to use it at his own discretion and pleasure, without any hesitation, solely by “the right of the strong”, as ostentatious bravado, so inherent in this, to put it mildly, peculiar policies. And his talk about pumping out “black gold” that never belongs to them from the Syrian bowels, the United States intends to compensate for the expenses of its taxpayers for another overseas military adventure, started under the pretext of “fighting Islamic terrorism”, and they are, excuse me, "Noodles" in its purest form. Apparently, it was intended for the ears of those very taxpayers, and at the same time for the entire “world community”. There is, of course, oil on the eastern bank of the Euphrates, where American warriors and their Kurdish allies are now hastily digging and strengthening themselves. Moreover, it is there that the main reserves of this raw material in the country are concentrated. However, if you believe the same Maria Zakharova (why not believe her?), Who voiced the figure of $ 30 million received by the United States from the smuggling of "black gold" from these deposits, it becomes ... ridiculous. Let me remind you that the daily (!) Volume of US oil exports this year exceeded 2 million barrels. By some estimates, came close to three. We multiply this by the conventional 60 "greenbacks" per barrel ... No, your will, something does not add up here.

Well, for the sake of a ridiculous amount of 30 “lyamas” a month for them, the Americans would urgently return their soldiers to Syria, equip bases there, transfer thugs from Blackwater. Wrong volumes, wrong bets, wrong level. No, "petrodollars" from the shores of the US Euphrates, of course, are needed. But, I think, by no means to replenish their own budget. In my opinion, the revelations of the Pentagon spokesman Jonathan Hoffman look much closer to the truth. He said without much embarrassment that this money would be spent on “support” (that is, on armament, equipment and training) of the Kurdish units of the Syrian Democratic Forces ( SDF). However, there is no doubt that these words are just another screen concealing Washington’s true intentions. After all, they will not openly admit that they intend to save from the final defeat and, if possible, reanimate and bring to a combat-worthy state the debris of the ISIL, which we and the troops didn’t complete, and whose troops they recently “liquidated” with such pomp. And at the same time - and the rest of the terrorist rabble eating up in and around the failed Islamic State. There is no doubt - all this gop company in the State Department, the CIA and other much less well-known American "offices" are determined to use for its intended purpose. That is, to maintain instability and tension in the Middle East. It is possible that far from there. The recent “debut” of these bandits on the Tajik-Uzbek border makes us wonder where exactly their strikes might be reoriented ...

Terrorists for the Middle East

However, the main region of the use of terrorist groups again taken by Washington under the wing of Washington is likely to be the Middle East in the near future. It is worth remembering that to nurture and nurture Islamist extremists for their own needs, then wage an “implacable fight” with them, and then save them in order to use them again in the dirtiest geopolitical intrigues, is a good tradition for the United States. This is what has been happening, at least since the time Soviet troops entered Afghanistan. Various international experts differently assess the role of the United States in the appearance and bloody affairs of the same Al-Qaeda and the Islamic State, but everyone who has at least a bit of conscience agrees that it could not do without the Americans. In any case, they literally nourished Osama Bin Laden. And no "caliphate" would not exist without their invasion of Iraq. And, in fact, why would Washington suddenly take, and stop its efforts to destabilize a region that is not giving him peace? Global goals, such as eliminating the “regimes” unwanted by him in Damascus and Tehran from the authorities, have not been achieved. Moreover, the US embarrassment turned into the most unexpected and extremely unpleasant way for them - a sharp strengthening of Russia's positions and influence in the Middle East. And with this, of course, something needs to be done. Not with your own hands, of course. Today, the main value of Syria, which the Americans are not going to release from their own mouth, is for them not even in oil. This is the place where for the first time since the collapse of the USSR, Moscow managed to disrupt the plans of Washington, which is firmly convinced that this should not be.

Most likely, the matter will not be limited to the mere formation of new “opposition” units, directed not only against Damascus, but also against Ankara. Here, perhaps, the head of the Russian Foreign Ministry Sergey Lavrov is right, who saw in convulsive American body movements clear signs of attempts to create not just a terrorist enclave in northern Syria, but a kind of "quasi-state" that will put an end to all attempts to establish a durable and final peace in the country, to begin it rebirth. In Washington, in fact, they do not hide their intentions to cut off Damascus from oil fields, the proceeds of which should have been used to restore to the ground destroyed by the long-term war of Syria, almost openly declaring that the "local dictator" should "rule the ruins." All ostentatious games, such as the Syrian Constitutional Committee, which began its work at the UN Geneva headquarters not so long ago, are nothing more than a pretense that should demonstrate how the “world community”, under the strict guidance of the United States, cares for peace, and most importantly, “ democratization ”of the country torn to pieces by him. In the West, they express extreme dissatisfaction with the fact that, both the development of a new Syrian constitution and the upcoming elections will be held there, albeit “under the supervision” of the UN, but, as the realists admit, “on the conditions and under the control of Moscow”. Moreover, if the European Union, choking on the flows of refugees and migrants, is interested in establishing peace, both in this particular country and in the Middle East as a whole, quite sincerely and vitally, then the United States has, of course, completely different goals.

War and contention for all

Strictly speaking, the withdrawal of US troops from Syria in itself was largely an attempt to “push their foreheads” over Ankara, Moscow and Damascus. The first two - especially. Well, it almost happened already in 2015! A little before the full-scale war did not come. However, this time the number did not pass. And quite the contrary, everything that happened after the meeting of the Russian and Turkish presidents in Sochi on October 22 contributed to the rapprochement (albeit purely situational) of our countries and new image losses of the United States. Now, it seems, in Washington they decided to take on the same, but not “with the condo”, but thoughtfully and in depth. Confused Kurdish militants, once again feeling the support of the "big brother" behind their backs, sharply perked up and set to work on the old. So far, there has been a relative lull in the established de-escalation zone provided by joint patrolling of the Russian and Turkish military, but it is unlikely to last long. In any case, according to Recep Erdogan, the Kurds did not fulfill the most important of the clauses of the ceasefire agreement - they did not divert their forces to the agreed distance from the Turkish border. It is precisely with this that the visit of the Turkish leader to Washington is connected, where, as it is supposed, he intends to raise the issue of supporting the Kurdish formations with the United States. At the same time, Ankara’s statement that their president intends to go directly to Russia from the American capital sounds very eloquent. More than a transparent hint: “Look, we will not agree with you, we will continue to strengthen the alliance with Moscow!”

What Erdogan can achieve from Trump with such frankly blackmail maneuvers (which, however, is his corporate identity), time will tell. In any case, once again fanning the hope of their support in the Kurdish leaders, the Americans directly contribute to making the flames of war flare up in northeast Syria with renewed vigor. And then they will make every effort to play on the really serious contradictions that exist between Moscow, Ankara and Damascus. By the way, one more event testifies that the USA is not going to leave Syria alone. The Israeli IDF, after a rather long break, again dared to launch a missile strike on the capital there. Everything is justified, of course, by the need to “eliminate the leader of the terrorists”, allegedly involved in the attacks on Israel, which was at that time in Damascus. However, the whole point here is that after the most serious warnings received by the Israeli leader in Moscow, Tel Aviv, which for a long time allowed itself to manage in the Syrian sky, as in its own way, not only sharply slowed down, but generally stopped any hostile creeping in alien airspace. And now - again “emboldened” ... It is unlikely that Israel agreed with the United States on this specific attack, but there is no doubt that the general tactics and strategy of their actions are coordinated with them there. Consequently, it can be assumed that the Israeli military received carte blanche for another escalation, fraught with complication of relations with Russia, again, from the Americans.

Today we can only make assumptions as to what other forces and means will be used by Washington to create a situation in Syria that is as unprofitable and uncomfortable for our country as possible. The only thing that can be doubted is that the Americans returned there not so much for the sake of oil self-interest as to continue and intensify the geopolitical confrontation with Russia and its allies. And the problems they are creating hard will have to be solved inevitably - one way or another.
Ctrl Enter
Noticed oshЫbku Highlight text and press. Ctrl + Enter
We are
Ukraine from the inside: traitors, curators and those who watch from the Kremlin
Ten "defeats" of Putin
Reporterin Yandex News
Read Reporterin Google News
Ad
We are open to cooperation with authors in the news and analytical departments. A prerequisite is the ability to quickly analyze the text and check the facts, to write concisely and interestingly on political and economic topics. We offer flexible working hours and regular payments. Please send your responses with examples of work to [email protected]
4 comments
Information
Dear reader, to leave comments on the publication, you must sign in.