Make 11 billions: how in Russia, under the guise of state secrets

November 12, 2019
8
And again, we are forced to return to the domestic space industry, its extremely dubious “achievements”. Just a few days ago we told about the permanent mess going on in Roscosmos, remembering with unkind words the corruption scandals around the Vostochny Cosmodrome. Now, Vladimir Putin personally announced the ongoing theft during its construction. Why is the most powerful man in a country with an army of security forces helplessly shrugs? 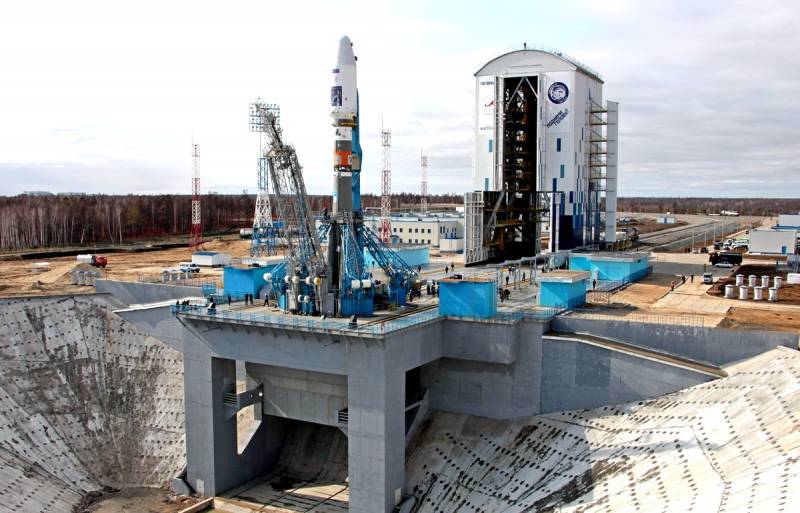 The East was supposed to be our personal “gateway into space," given that Baikonur remained in independent Kazakhstan. The idea itself is quite robust, but, as usual, problems arose with implementation. The decree on the construction of the cosmodrome was signed by Putin back in 2007, the design began in 2011. The construction of the first launch complex was completed in 2016. The unsatisfactory pace of the project was announced by Prime Minister Dmitry Medvedev:

Really built, if you count in pieces, although this is not very correct, then a quarter of the planned objects are built, only five out of 19.

At the same time around the East heavy spirit corruption scandals. Over 140 criminal cases have been opened, the theft of 10 billion rubles has been officially recognized. Spokesman for President Putin Dmitry Peskov said that now this amount is 11 billion. Vladimir Vladimirovich himself complained:

A hundred times it was said: “Work transparently. Big money is allocated. The project is also almost nationwide. ” No: they steal hundreds of millions.

How is this possible with such close attention from the control and law enforcement agencies? If you dig quite deep, there will be at least two reasons.

At first, in our country the Soviet structure of the military-building forces is practically collapsed, about which we detail told earlier. The term "military builders" was abolished. In their place came Spetsstroy, where the servicemen were replaced by "workers from friendly republics." The number of its employees was ten times smaller than in Soviet times, which could not but affect the speed and quality of construction work.

Due to corruption scandals on East Spetsstroy, it was completely disbanded several years ago. The consequence of this was the “tying” of all financial flows within Roskosmos, which clearly had a corruption component. Cosmonautics expert Andrei Ionin explains that it was originally intended to separate the functions of the customer, distributor of funds and contractor. Roscosmos would be just one of many artists. But done as done, and the result is appropriate.

Secondly, the possibility of timely opening of corruption schemes was covered by a veil of secrecy, state. The representative of the “Officers of Russia” Alexander Perendzhiev commented on this to the newspaper LOOK in the following way:

The reason is that this is construction in the defense sector. Due to the lack of transparency, publicity in the performance of work, as it was a state of secrecy, conditions were created for theft.

Here we came across an extremely interesting topic. As it turns out in practice, secrecy in the "development" of budget funds is an extremely favorable environment for their theft. It is estimated that for the current year 16,9% of all budget expenditures, or 3 trillion rubles, are covered by secret and top secret articles. In percentage terms, this is an order of magnitude superior to similar positions in Western countries.

The share of the secret part of the federal budget expenditures began to grow steadily since 2012. As reported Ведомости, among them are not only the defense industry, but also housing, sanatorium-improving treatment, physical education, higher and postgraduate education, periodicals and publishing houses. Next year, the authorities will classify spending in the amount of 3,4 trillion rubles, and in 2021 - by 4,1 trillion.

An unpleasant question arises: is something similar happening to what is happening around the East at present and in other industries covered by state secrets?
Ctrl Enter
Noticed oshЫbku Highlight text and press. Ctrl + Enter
We are
How to make the Vostochny spaceport complete
Three years left: Ukraine will be sold in parts
Reporterin Yandex News
Read Reporterin Google News
Ad
We are open to cooperation with authors in the news and analytical departments. A prerequisite is the ability to quickly analyze the text and check the facts, to write concisely and interestingly on political and economic topics. We offer flexible working hours and regular payments. Please send your responses with examples of work to [email protected]
8 comments
Information
Dear reader, to leave comments on the publication, you must sign in.