Why a nuclear war in the Baltic is real 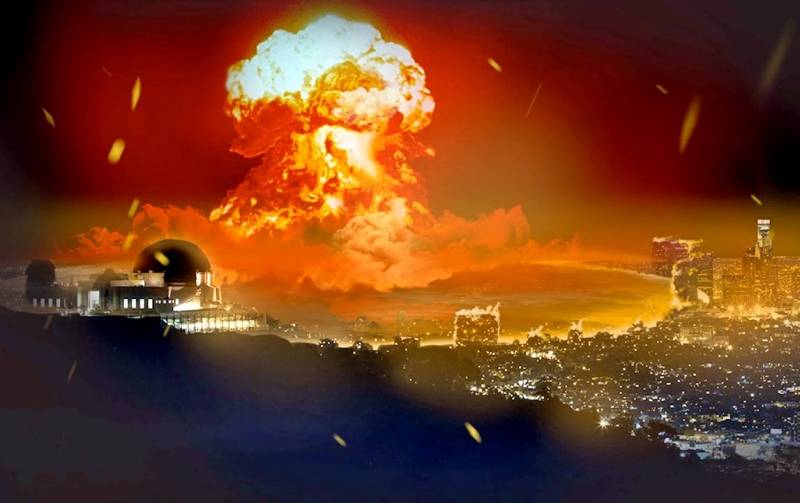 According to the calculations of Chinese analysts, in the event of a war with NATO, Kaliningrad will be able to hold out no more than two days. However, the Russian Defense Ministry will not sit in the bushes and, instead of “cutting through the Suvalki corridor,” it will launch a retaliatory attack on the capitals of the next eight countries that are part of the North Atlantic Alliance. What is the likelihood of conflict escalating into nuclear?


All theoretical speculations about the war between Russia and NATO, as a rule, rest against the indisputable fact that our country is a nuclear power with the second largest arsenal. In the philistine view of any "sneeze" in our direction from the West, it can certainly end for him turning into radioactive ashes. But, strangely enough, the likelihood of the use of nuclear weapons by the West itself is gradually increasing, and there they are not so afraid of it.

During the Cold War, the Pentagon could only count on stopping Soviet military power with a nuclear strike. In their best years, the forces of the Warsaw Pact countries could reach the English Channel. Not experiencing much trepidation for the subsequent fate of the Old World, American strategists expected to stop the onslaught from the East with nuclear weapons and actively promoted their concept of deterrence by conducting appropriate exercises on our borders.

After the collapse of the USSR, the existential threat to the West disappeared, and with it most of the Soviet military and economic relics. The young Russian Federation began to integrate into the capitalist system, domestic elites were on the “same wavelength” with the West. Everything changed after the events of 2014. They are now making every possible way of “world threat” from our country, separately paying attention to the special situation of the Kaliningrad region, which is “stuck” between the countries that are members of NATO.

First, the alliance will have to crush the Russian exclave located in its rear. An attack on Kaliningrad will entail a counterattack of our troops. In the West, they believe that Russian tanks will be in Riga, Vilnius and Tallinn in 2-3 days, since the existing NATO contingent in the Baltic is not enough to withstand. The question is, what's next? Will Washington and Brussels agree with the Anschluss of the Baltic region by Russia or will they lead a long war for its liberation?

And this is a key question, since the objective reality is that the modern Russian economy will not extend a long war of attrition. Western analysts believe that Moscow is the first to use nuclear weapons. However, contrary to the narrow-minded notions, this will not be an attack on “decision centers”. This is the so-called concept of “escalation for de-escalation”. To this end, the Russian Strategic Missile Forces will deliver several “demonstration” nuclear strikes against certain limited targets in the Atlantic or on the Western Front. Their goal will be to frighten the enemy by the readiness to use the “nuclear baton" to end the conflict and sign peace under the Kremlin’s terms.

The problem is that NATO itself can use nuclear weapons against Russia to prevent progress in the Baltic states and Eastern Europe. However, the Pentagon will try to limit itself to the use of tactical nuclear weapons in order to deter Moscow from using ICBMs. According to the Nuclear Survey policy Pentagon from 2018, in the United States thought about some very thin line between the nuclear apocalypse and the usual war with tank wedges. Instead of the conventional Tsar Bomb, Americans are now interested in low-power nuclear weapons for real use against the enemy.

Low-power tactical nuclear weapons will become the “missing link” and will be the Kremlin’s new deterrent. According to the calculations of the RAND agency, delivering such attacks on the advancing Russian troops will stop Moscow, but will not lead to the start of a total nuclear war. As an alternative, Western analysts cite a serious buildup of conventional NATO forces in the Baltic states, which should ensure that the strategic region does not fall in a matter of days.
Ctrl Enter
Noticed oshЫbku Highlight text and press. Ctrl + Enter
We are
Putin's phenomenon is Russia's main problem
Ten "defeats" of Putin
Reporterin Yandex News
Read Reporterin Google News
42 comments
Information
Dear reader, to leave comments on the publication, you must sign in.