November 9 2019
2
In November 2018, we toldas the sailors of the Norwegian Navy frigate Helge Ingstad (built in 2009) cheerfully celebrated the next victory over the "aggressor" after completing the large-scale NATO Trident Juncture exercises. Then the sailors brought to some senses a strong blow that arose as a result of the collision of an uncontrolled frigate with the Sola TS oil tanker off the west coast of Norway in the municipality of Eigarden. 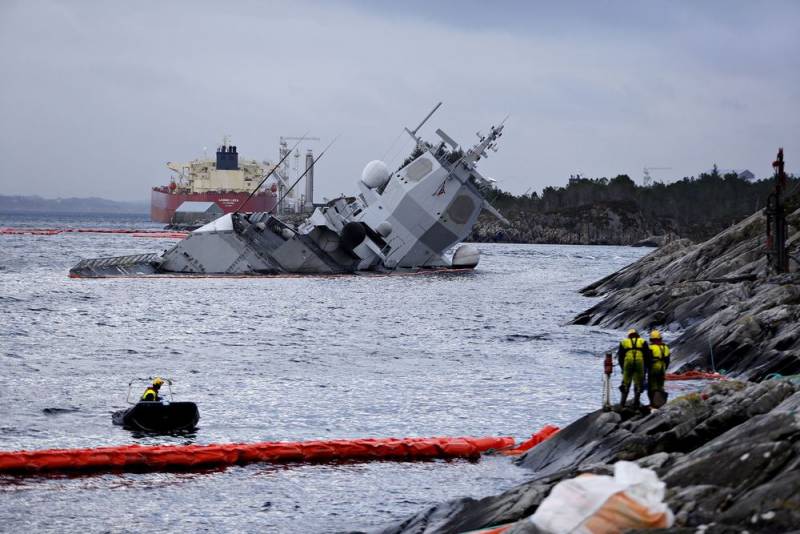 It should be noted that a huge tanker just came across a turned-up “shell”. As a result of the collision, the tanker escaped with minor damage, and its crew of 23 people was not injured at all. The frigate, rushing to the main naval base of the kingdom of Haakonswern (the municipality of Bergen), received significant damage and injured 8 sailors. However, the frigate’s crew did not fight for the survivability of the ship, worth about $ 500 million, and sent it to the nearest stones near the unequipped shore. After that, the “fearless Vikings” rescued their highly paid torso and left the ship, observing its agony from the shore (in the area of ​​the Helte Fjord). After that, in the information space of Norway, “suddenly” materialized the idea that “the Kremlin’s hand” is to blame for what happened.

And so, a year passed, and a special commission investigating the incident published a “preliminary” report. After that, shots of a direct collision between a frigate and a tanker appeared on the Web. By the way, there is not a word, not even a hint, about the “hand of the Kremlin” in the report. Although it has already been stated that the investigation "is unlikely to be fully completed by the end of 2019," so we will not rush.

The report says that there are three main reasons for what happened. The first is a navigation error. The second is inconsistency with the motion control center. The third is the lack of proper response of the frigate crew to signals sent by the crew of the tanker (it is harder for a large ship to change course).

Moreover, the commission of the Norwegian Armed Forces informed the public that the frigate’s personnel, who were at that time on the bridge, “did not possess the skills that would help to avoid a clash”. A chronology of events was also established and presented. In addition, in the report itself there were questions to which the commission has no answers.

Did the attendants change differently than usual due to the presence of guests on board?
- said in the report, without specifying what kind of "guests" in question.

The Commission believes that the frigate "with excellent maneuverability" drove himself into a trap and put under attack. He moved at a speed of 18 knots with the traffic tracking system turned off. A series of mistakes by the frigate team led to a disastrous result. A few months after the incident, with the help of floating cranes, the sunken frigate was lifted and towed to the port.
Ctrl Enter
Noticed oshЫbku Highlight text and press. Ctrl + Enter
We are
On the NATO exercises in the Baltic Sea, an emergency occurred with the Polish Navy ship
Culmination of NATO exercises: frigate rammed tanker
Reporterin Yandex News
Read Reporterin Google News
Ad
We are open to cooperation with authors in the news and analytical departments. A prerequisite is the ability to quickly analyze the text and check the facts, to write concisely and interestingly on political and economic topics. We offer flexible working hours and regular payments. Please send your responses with examples of work to [email protected]
2 comments
Information
Dear reader, to leave comments on the publication, you must sign in.