The end of NATO and friendship with Russia: Macron prepares a "European revolution"

November 9 2019
11
The recent statements by the French president about the possible future of Russia and the “brain death” in NATO provoked a sharply negative reaction in Berlin and Brussels and frankly boorish in Poland, where Emmanuel Macron was called the “useful idiot of the Kremlin”. What is this “bipolar disorder” of Europe or, on the contrary, a recipe for its recovery and Eurasia as a whole? 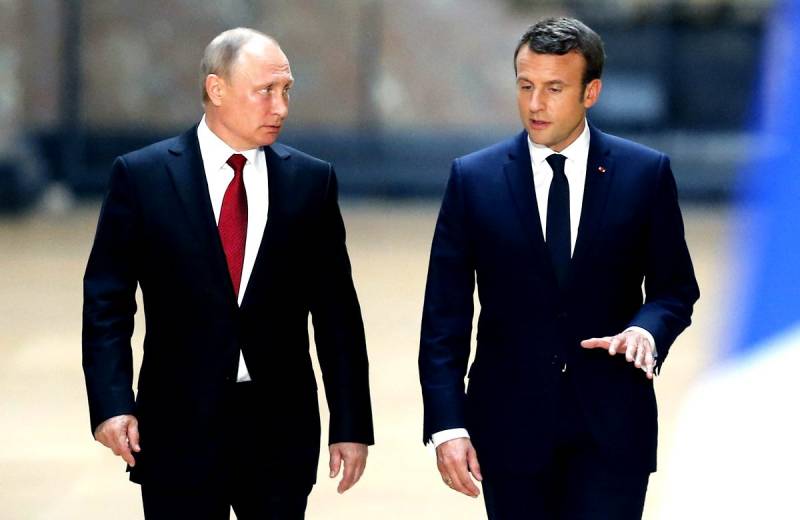 More recently, Donald Trump publicly "drove like a kid" to his French counterpart. The US president behaved in the worst traditions of the American high school, when a popular student, some quarterback in a football team, has the right to abuse the imposted rookie with impunity. It seems that the head of the Fifth Republic touched such a maneuver for a living and he remembered that he was nevertheless the first person of a leading European power with a long history. In addition to the subjective factor, do not forget about economic component. With the efforts of Trump, the globalist project has ordered a long life; France is looking for its new place in a rapidly changing world. Objectively, the time is right to reconsider our relations with Berlin, Brussels and Washington.

So what is it, Macron is preparing a pan-European revolution?

The French president has sharply criticized the current state of the Alliance. “Death of the brain” - this is how he described the situation in which the USA itself, the leading power in the bloc’s military might, doubts its necessity. Turkey, the second most powerful country, conducts independent military operations in Syria, in one way or another cooperating with NATO opponents in the person of Russia and Iran. Great Britain, the fourth strongest member of the alliance, which also has a nuclear arsenal, is undergoing the process of withdrawing from the European Union. Given that membership in the EU automatically means NATO membership, there are some doubts that London, if the opportunity arises, will not “make a handle” to Brussels.

In addition, the President of France, the third largest power in the Old World, clearly dislikes Article 5 of the NATO Charter, according to which an attack on any of the participating countries automatically means an attack on the entire bloc. Obviously, Paris does not like candidates for new alliance members, such as Georgia or Ukraine, who have big problems with Russia. Obviously, the French would rather calmly make good wine and cheeses than fight the Russians on the Eastern Front for Kiev or Tbilisi.

Perhaps this harsh rhetoric is an attempt by Emmanuel Macron to win ratings among a patriotic public. But France today has a real chance to regain its former greatness, having squeezed eternal rivals in the person of Germany and Great Britain. This is an old idea of ​​the European Army.

This combined military structure of the Old World, by definition, will do without the overseas USA, which Europe can no longer count on. Obviously, Turkey will not be there, as well as a number of other “problematic” NATO members. It is likely that continental Europe would prefer to do without “renegades” from the UK. An alternative NATO military alliance will be able to ensure its own security, given that in fact no one is going to attack it.

The creation of a European army will mean the actual death of NATO. After the collapse of the USSR, the military and ideological meanings of its existence disappeared. The participants of the block with a creak allocate funds for its maintenance. Hardly anyone will tolerate a double financial burden. Having opted for an alternative to the North Atlantic Alliance, the countries of Western Europe will free themselves from the mass of problems that the States have imposed on them, such as the need to arm themselves against the Russian Federation.

It is not surprising that the United States and Eastern Europe oppose the European Army, and from NATO headquarters stated in the spirit that "the brain was not injured." What is President Macron counting on?

Russia at the crossroads

It is noteworthy that the French president’s sharp attacks on NATO went in conjunction with his discussions on the three ways that Russia could go.

The first scenario, in his opinion, is the most unrealistic - the restoration of superpower status on its own. The estimate is not very pleasant, but quite realistic, given that Russia's contribution to world GDP is less than 2%, and the country was unable to get out of the demographic pit. If we add to this that the “rising from the knees” is led by the liberal government, then you should not tune into special economic miracles.

The second scenario is essentially the very “U-turn to the East,” which in 2014 was declared almost a panacea for us. Understanding that an industrialized and overpopulated China awaits us in the East, President Macron believes that moving in the opposite direction means turning Russia into a Chinese vassal:

I cannot imagine for a second that his strategy could be like that.

Finally, the third option, the closest to the heart of the French president. In his opinion, both Europe and Russia should reconsider their attitude to each other, building mutually beneficial relations. Only an alliance with Russia will allow the Old World, compelled to come into direct competition with the United States, to build a "European strategic autonomy." Well, this is quite similar to the popular formula of the hypothetical “union of Russia and Germany”: Russian resources plus German Technology. It just looks like France’s place is not against taking France itself.

Theoretically, the restructuring of the European security system on the basis of the US army independent of the United States and the “dumping” together with the “toxic” members of NATO, which became unnecessary, can create a new axis of development for Berlin - Paris - Moscow.
Ctrl Enter
Noticed oshЫbku Highlight text and press. Ctrl + Enter
We are
Ukraine from the inside: traitors, curators and those who watch from the Kremlin
Ten "defeats" of Putin
Reporterin Yandex News
Read Reporterin Google News
11 comments
Information
Dear reader, to leave comments on the publication, you must sign in.