War of drones and Russian snipers: what is happening in Libya today

November 9 2019
1
Field Marshal Haftar's blitzkrieg failed. The Libyan National Army (LNA) to this day has not taken Tripoli, stomping around its outskirts. Only real external military assistance can turn the tide in one direction or another. And, as it is now fashionable, the Western media saw under the walls of the Libyan capital Russian mercenaries with sniper rifles and UAVs. 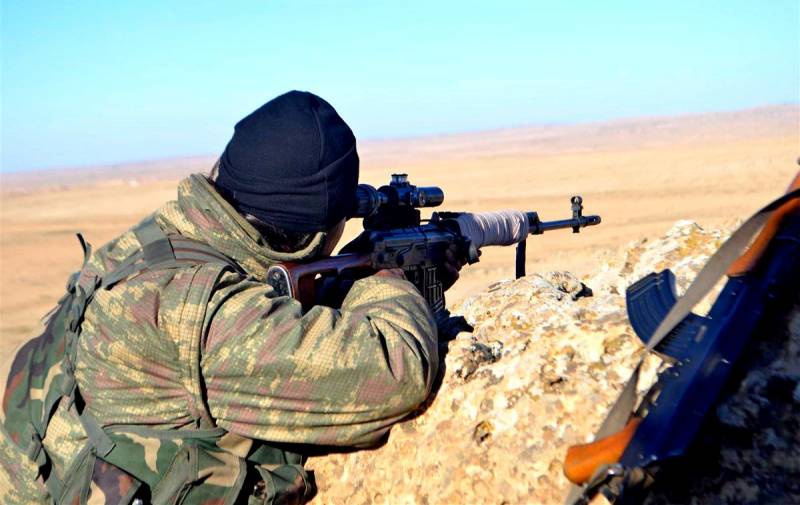 The popular New York Times published a large material on Russian participation in the capture / liberation of Tripoli. According to American journalists, about 200 fighters of the same Wagner PMC are now fighting on the side of Khalifa Haftar. Note that there is no convincing evidence, except retelling from other people's words and photographs of a certain person of non-Slavic appearance with a machine gun that runs barefoot in the hot sands. Confidently identify in him our compatriot did not work. We are also blamed for the growing number of injuries from sniper rifles.

As they say, the New York Times failed to convincingly find “Wagnerites” in Libya. However, it would be better if they were still there, like that gopher from an old film that is not visible, but it is. What reason is there to say so?

After the aggression by NATO, the once prosperous Libya was split into parts, waging a bloody war between themselves. In fact, the country has dual power: the government officially recognized by the West and Russia in Tripoli and the parliament, to which field marshal Haftar is subordinate, in the East. The end and edge of this conflict is not visible. It’s possible to turn the tide only by force, when only one of the sides will prevail.

An attempt to capture / release Tripoli was made by Khalifa Haftar. At first, his unexpected attack developed successfully, but in the end, the Libyan National Army was bogged down in the defense of the capital’s defenders. The problem is that this “army” is essentially a motley conglomerate of armed people. There is no need to speak about a high degree of their training and discipline. Nobody intends to throw a breast on a machine gun in order to recapture another street or house from the enemy. By the way, the defending side is something similar.

Due to the unwillingness to hack to death, “desert children” quite unexpectedly mastered the experience of remote warfare with the help of UAVs. With the money of sponsors, the field marshal purchased Chinese-made Wing Lun shock drones, which began to attack government supporters. Initially, this shocked the Tripoli defenders, but they turned to Ankara for help and received the Turkish Bayraktar TB2 UAV. Under the walls of Tripoli, real flocks of drones are now chasing after the enemy one after another.

However, practice has convincingly proved that drones alone cannot be defeated. The territory should be occupied by infantry, ready to face fierce resistance, which Haftar does not have. Something must be decided, otherwise you will either have to winter under the capital that has not surrendered, or ingloriously leave. And it is precisely now that Western and a number of Russian opposition media are increasingly talking about Russian "mercenaries."

Since Moscow officially recognizes the pro-Western government in Tripoli, it cannot directly help Haftar. However, we are already toldthat during the last visit of the field marshal to Russia when communicating with him, the name of the oligarch Yevgeny Prigozhin, who is considered the real owner of PMC "Wagner", was mentioned. Russian military specialists can not only take part in hostilities, but also conduct training for local infantry. Despite the fact that Khalifa Haftar is a very difficult person, his victory and the unification of the whole country under a single principle can be the first step towards establishing life in the tormented civil war in Libya.
Ctrl Enter
Noticed oshЫbku Highlight text and press. Ctrl + Enter
We are
Ten "defeats" of Putin
Libya went with the "Russian card"
Reporterin Yandex News
Read Reporterin Google News
1 comment
Information
Dear reader, to leave comments on the publication, you must sign in.