Creeping expansion: the Far East becomes the "province" of China?

November 8 2019
37
In Russia, one can often hear talk about the creeping expansion of China and that the Far East has already de facto become the unofficial province of the Celestial Empire. Is it really so, and if so, who is to blame, and what should be done? 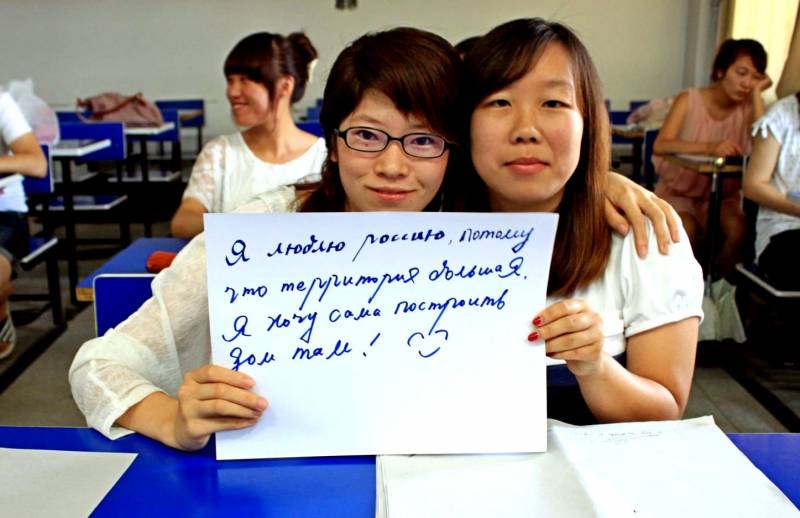 For the last time, our Far East is no longer ours, the Far Eastern deputy Andrei Andreichenko said in the State Duma:

China receives cheap electricity from us. Moreover, it is cheaper than in Russia. Soon it will begin to receive gas, although our regions are not gasified. Next is the forest. It is time to stop the export of the "ship" to China.

So, the conversation is substantive: electricity, gas and forest.

In figures, everything does not look very beautiful: 1 kW / h costs China 1 ruble 25 kopecks, and in the same Blagoveshchensk it costs about 3 rubles. At the time, talking about discrimination against Russians, but everything is somewhat more complicated than it seems at first glance.

The energy system of the Far East is largely isolated, and its generating capacity is excessive for this sparsely populated region. So far, they have not yet learned how to “conserve” excess electricity, so it is profitable for generating enterprises and network companies to sell it to neighboring rapidly developing China. Nothing personal, just business.

As for the price, China takes electricity at the rate that it considers acceptable for itself, knowing that Russia has nowhere to put it on, and idle water discharges to hydroelectric power stations do nothing good. Why is it more expensive for its own population? Profile Minister Alexander Novak explains this as follows:

In the cost of goods are the costs associated with the payment of salaries, with logistics. Therefore, when we talk about generating electricity and how much it costs, it costs exactly as much as the cost price.

Up to the end consumer, electricity goes through lines and transformers belonging to different companies. In its value lies the profit of all these intermediaries. If you dig very deeply, then the reasons for the high tariffs will lie in the so-called “RAO UES reform”, when the country's unified energy system was split up and sold out in parts to “effective owners” according to the prescription of A. B. Chubais.

Next month, deliveries to China will begin. After reaching full capacity, 38 billion cubic meters of “blue fuel” will be pumped to the PRC annually through the “Power of Siberia”. However, at the same time, many regions of our own country are not gasified; in the village they heat wood. Why is that?

The thing is that we live in a world of victorious capitalism. Gazprom needs revenue in foreign currency, so the export direction is a priority for him. Despite the impressive price tags that the “national treasure” set for connecting to gas, top management is not set up to pull pipes to each remote village. Tea, not the Communists are sitting there. It is necessary to have time to warm Europe, and to boost China's industrial development. But the state does not have money to subsidize such projects, we still need to restore Syria.

China is our largest buyer of raw wood. About 20 million cubic meters of round timber go there annually through official channels. But besides this, there are also “black loggers” who do not bother with security measures and subsequent restoration of forests. Because of this, every year millions of hectares of taiga burn out, livestock die, and the environment suffers.

The most interesting thing is that not only the Chinese are illegally working with saws and axes, but our compatriots who are conducting this criminal business in favor of the interests of China. This is fertile ground for the flourishing of corruption in the control and law enforcement agencies of the Far East.

How did this become possible? If you dig a full bayonet, it turns out that a terrible blow to the Russian taiga was inflicted upon the adoption of the Forest Code, when tens of thousands of professional foresters were reduced, and the authority for forest protection was transferred from the federal to the regional level without proper funding. And everything fell. Surprisingly, over the past decade since the adoption of the LC of the Russian Federation, “a damn dozen” no one has bothered to reverse the destructive decisions.
Ctrl Enter
Noticed oshЫbku Highlight text and press. Ctrl + Enter
We are
Peace enforcement operation. Russia inflicts a preemptive strike on Kiev
“The dark August night came the one whom the Ukrainians were waiting with horror”
Reporterin Yandex News
Read Reporterin Google News
37 comments
Information
Dear reader, to leave comments on the publication, you must sign in.