Russia loses to Japan "the battle for the Kuril Islands"?

November 7 2019
21
The Russian authorities took another step towards Tokyo in the "settlement of the Kuril issue." Japan gained the opportunity of an “exclusive order” to visit the islands it disputed, without losing an inch to its sovereignty over the “northern territories”. What next achievements will follow the “Japanese visa-free travel”? 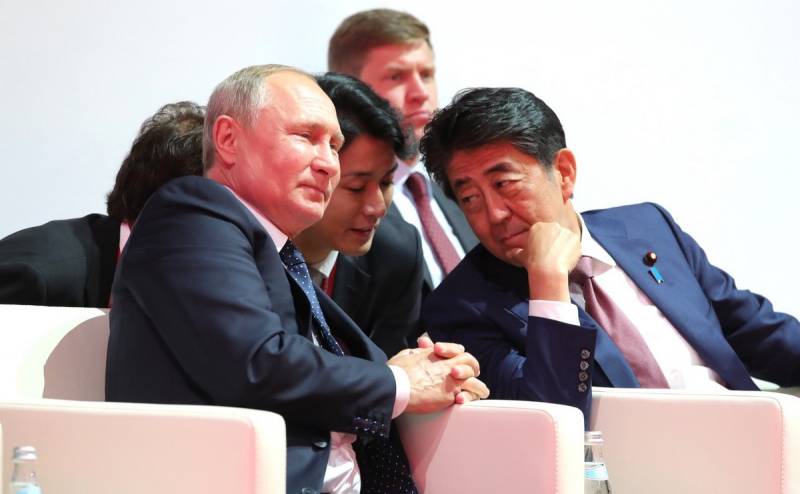 What is this actually talking about? As you know, the Kuril Islands became part of the USSR following the Second World War. Japan, as the losing side in alliance with the Third Reich, has lost what it stubbornly calls its "northern territories."

However, today in the Land of the Rising Sun, revisionist sentiments are extremely strong. The new generation of Japanese people does not feel the historical guilt of their ancestors and demands the island back. The idea that the USSR allegedly "treacherously" attacked Japan is actively promoted, and therefore its territorial claims are illegal, which we told earlier. Japanese youth indignantly listen to stories about the unimaginable suffering of prisoners of war of the Kwantung army, defeated by Soviet troops.

In general, history has already been rewritten, the population has been processed, and the ground for reviewing the results of World War II in the island nation has been prepared. In this regard, questions arise about the extraordinary activity of the Russian leadership in the Japanese direction.

A year ago, a big resonance in Russian society was caused by the unexpected idea of ​​President Putin to sign a peace treaty with Tokyo, without which we lived very well and cooperated with the island state all these years. This was proposed to be done on the basis of the 1956 Joint Declaration, where the transfer of the islands of Shikotan and Habomai to Tokyo was provided for in black and white. For obvious reasons, what happened caused extremely unhealthy excitement among the Russians, who overwhelmingly spoke out against such a “solution to the problem”.

Since the beginning of 2019, the topic has seemed to quiet down. However, the "joint economic activity" of Russia and Japan in the Kuril Islands continues to develop. The fundamental question for Moscow and Tokyo is based on what legislation to implement all this. If the Japanese government agrees to Russian law, it thereby recognizes Russian sovereignty over the islands that it considers to be its own. Let us focus on this legal nuance.

From the Japanese media it became known that Moscow provided “exclusive order” for Japanese citizens to visit the Kuril Islands. Under Russian law, a visa is required to enter our territory, to which the Kuril Islands belong. President Vladimir Putin explained that this was done for "humanitarian reasons", and "exclusivity" has its own subtlety:

It lies in the fact that we are not just creating the opportunity for Japanese citizens to visit these islands, but also doing this in a visa-free manner.

It turns out that in the Kuril Islands we have exceptions to the current legislation in relation to citizens of a country applying for this territory. Moreover, this special regime is granted not only to elderly Japanese who have relatives on the islands, but for those who wish to visit there, including Japanese officials. Here is such an "exclusive" we get sovereignty over the Kuril Islands. Vladimir Putin specifically clarified his position:

We understand the subtlety of this situation and just go forward.

Note that in international diplomacy there is a principle of reciprocity. But, despite the special “humanism” and understanding of the “subtleties of the situation”, Tokyo did not reciprocate, for example, in the Crimea. Neither residents of the peninsula, nor Russian citizens residing in the DPR and LPR can get Japanese visas.

What's next?
Ctrl Enter
Noticed oshЫbku Highlight text and press. Ctrl + Enter
We are
China is no longer our friend: Russia changes Beijing to Tokyo
Ten "defeats" of Putin
Reporterin Yandex News
Read Reporterin Google News
21 comment
Information
Dear reader, to leave comments on the publication, you must sign in.