Ukrainian mirages: from "hypersound" to the cosmodrome

November 4 2019
4
An interesting thing: the more catastrophic the situation of Ukraine in reality is, the more loud and belligerent statements begin to sound from there. There is no need to worry about the upcoming cessation of gas transit and the energy crisis inevitably arising from it (almost immediately) and the collapse economics (somewhat later) ... 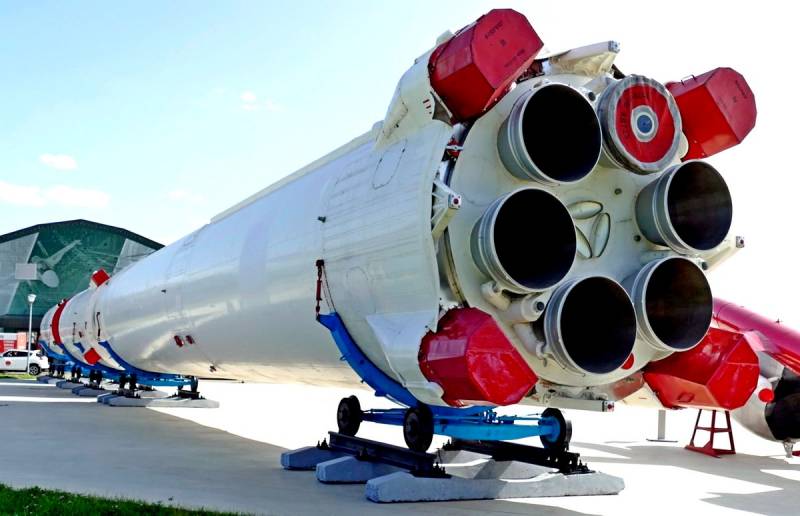 Instead, Kiev is taking seriously to rant about the creation of "missile regiments", the goals for which could be located in our country nuclear power plants. And if someone thinks that such ideas, which are already very close to the brink of psychiatry, are unique to “couch experts” and other semi-marginal audiences, then this is a big mistake. Alas, at the state level in the “unplaced” continue to be worn with projections, at least not less crazy.

Ukrainian "Lightning" over the Black Sea

Medium-range missiles (which, in fact, Kiev doesn’t even have on paper) ... And you don’t want “hypersound” - fear and horror for “damned Muscovites” ?! In any case, it was precisely such jingoistic patriotic messages that erupted in the Ukrainian media after SOMETHING was presented at the booth of the Weapons and Security-2019 exhibition held in the capital there last month. This very something in its appearance, rather, resembled the very diligent work of the participants in the children's circle on rocket modeling from the regional House of Pioneers, but the most advanced publications immediately proclaimed the craft "a model of a hypersonic rocket." Those, in which the remnants of honesty prevailed over patriotism, simply called it “supersonic,” which, however, doesn’t change much ... At first, in order to keep the intrigue, they confined themselves to the mysterious “developers do not disclose the TTX missiles,” but soon, as he was found in the “unfurnished” place, there was another “military expert”, a certain Oleg Zhdanov, who began to blur out the details to the right and left. According to him, the miracle weapon “illuminated” at the exhibition under the name “Lightning” (“Bliskavka” in Ukrainian) is nothing more than a “new generation anti-ship weapon” from which “there is no protection”. What time!

According to Zhdanov, the speed of the Lightning will reach 2-2.5 thousand kilometers per hour, that is, twice the speed of sound. Moreover, he suddenly, neither to the village nor to the city, managed to blurt out that the Israeli Iron Dome would not stop this rocket, which plunged everyone into complete bewilderment: “Ukraine, is it that you are going to fight with Israel ?!” However, for those who doubted, they quickly explained: the new weapon "will create a threat to the Russian naval fleet reigning supreme in the Black Sea." Some even began to argue that now, they say, they’ll “test it, possibly exaggerated defenses”. If it weren’t for such, to put it mildly, not too well-thought-out statements, then it would be even somewhere funny to watch the fuss that has risen around the model shown at the exhibition stand. Well, somehow I forgot that a layout can be created, in principle, of anything. At least an interstellar galactic cruiser ... Another question is - will this dream ever come true? So far, experts (not sofas, but technical ones) are arguing why, in fact, they “licked” their Lightning in the South: either from the French AMSP air-to-ground missile, or, which is much more likely, from the Soviet anti-ship missile X-31, in the Russian VSK today used mainly as a target for training firing. However, this, again, is not so important. 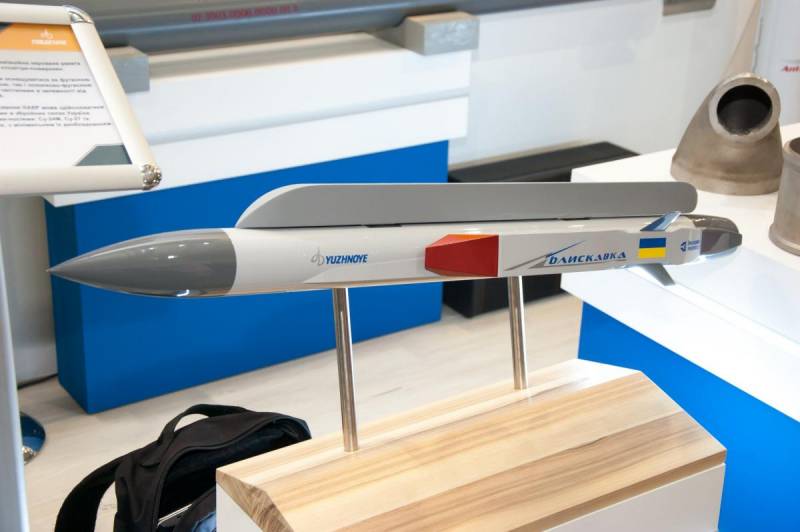 Homer laughter is caused by the announced plans to install the Lightning on the Su-27 and Su-24M nominally in service with the Ukrainian Air Force, moreover, with "minimal conversion" of these aircraft, which had long since become completely disrepair. Let me remind you, according to the rating compiled this year by the American military portal “We Are The Mighty”, military aircraft “up close” confidently entered the top ten ... the weakest and most readied air forces of the world. In the sixth place, it seems. American experts state the presence of "extremely outdated equipment and extremely poorly trained flight personnel. ” They also indicate a lag, for example, of the local Sushki from the Russian “by several tens of years.” Well, and what, to pigs, "hypersound" after that? The funny thing is that the hype raised by the Ukrainian media on this issue was quite unexpectedly supported by the Chinese Internet portal Sohu, which suddenly began to seriously discuss the “hypersonic” prospects of Ukraine ”and the possible problems of our Black Sea Fleet. On the other hand, the Chinese comrades can be understood. If Kiev really had at least something promising, they would have bought it. Quickly and completely inexpensively. However, judging by the coal enthusiasm of the Middle Kingdom, we are still dealing with the most perfect dummy.

Spaceships in the steppes of Ukraine

Yes, yes - it’s space and in the steppes! This idea has recently begun to acquire the character of "almost unshackled" nature of almost mass insanity. Having collapsed, almost to the ground, its own industry, infrastructure, railway transport, killing 99.9% of the roads “to zero”, they seriously decided to “take on space” there. Well, it’s obvious that there is nothing left ... However, this madness was undoubtedly triggered by the bill No. 1071 adopted by the local parliament (Verkhovna Rada) at the beginning of last month, “allowing private companies to conduct space activities,” including, so as not to be trifled, "launch rockets into space." Where to get rockets? It doesn’t matter ... The main thing is to start building a spaceport. Yes, such that all the powers of the world, which today have platforms for starry starts, take envy. Well, at least it was with such a promising program that one of the first contenders for "commercial space" - the Dnepropetrovsk (well, who would have thought!) Company with the proud name Space Logistics has already come forward. It’s nothing that the company has only seven employees on its staff year after year and, in fact, to this day they have been engaged in the fact that they drove loads of grain, either along the crumbling Ukrainian "piece of iron", or along the shallow rivers there. Since transportation on sinful land and water in Ukraine is clearly covered with a copper basin, it's time to switch to space flights!

The leaders of the company “on a blue eye” declare their firm intention to ward off an object in the steppes of the Kherson region that “will be included in the top five of the best cosmodromes of the Earth”! That's right, and no less! Who are they going to “move”? India? Japan? France? All these countries, in fact, have a couple of spaceports. But where do they go to the "uncovered"? The funny thing is that Space Logistics intends to spend only $ 50 million on all this beauty. The good idea is that in Ukrainian (and in no way, actually) this sounding breathtakingly for yesterday grain traders the amount is not enough even to erect a decent fence around an object of this scale and access roads to it, into the lush little heads of “conquerors of the universe” and does not knock. They don’t think about the fact that the construction, equipment and equipment, not to mention the content of the complex they conceived - with launching tables, launchers, a bunch of engineering and control and measuring equipment, will truly cost space. Proceeding from this, the idea suggests itself that in this case we are dealing with the space "New Vasyuki" in the Ukrainian manner. They will pick up the guys of “investments” for high-profile declarations, and they will dissolve in interstellar spaces ...

Nevertheless, while the starting masts in the steppes of the Kherson region rise only in the form of unsteady mirages, the nearest neighbors - Odessa residents have gathered to compete with them. Obviously, the toad crushed - very Ukrainian, you know. In any case, during the 5T investment forum held in Pearl by the sea last month, Odessa Vice Mayor Pavel Vugelman announced his intention to "make Odessa the space gate of Ukraine." He even, it seems, was going to reserve the land for the corresponding "construction of the century." There is no doubt that such an idea will cause an explosion of enthusiasm among the inhabitants of the Odessa region, by the way, which is much more densely populated than Kherson. As well as the fact that the Odessa "star explorers" from the authorities have already announced their intentions to focus on missiles like "Cyclone", fueled on the basis of poisonous heptyl. That will be a joy to the local population, especially if you take into account the Ukrainian specifics, according to which even seemingly vigilantly guarded warehouses with ammunition regularly fly up into the air. Yes, and regular falls on their heads and roofs of any unpleasant piece of iron are also unlikely to please them. However, most likely, neither Kherson residents nor residents of Odessa are in danger. All the talk about the "spaceports" in the wretchedness that Ukraine has now turned into has absolutely zero chances for implementation. Yes, this country once rightfully could claim the status of "space", however, at first the collapse of the USSR, and then the severance of ties with Russia, forever chained Kiev to the ground. 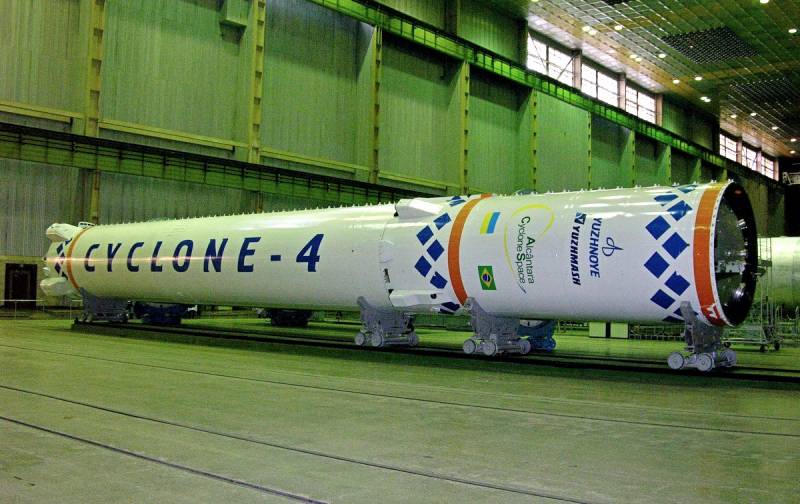 Today, Ukraine with a bang “flew” from the international project “Sea Launch”, was excommunicated from the creation of a cosmodrome in Brazil. Its only satellite, Lybed, built using Russian technology and Canadian money, is still gathering dust in a warehouse and is unlikely to ever come off the ground. Kiev is stubbornly trying to make itself a "space power" and in the local media periodically appear messages like:

The US-Ukraine booster rocket successfully launched from Wallops Island. One of the degrees of the rocket is designed and manufactured by Ukrainian enterprises
- I quote it verbatim, with spelling and meaning.

Which is not ... Instead of empty dreams of "hypersonic rockets" and the stars, which have become completely unattainable for it, Ukraine should take care of logging. Has everyone cut down already ?! Well, then, so fashionable in her adored Europe, "biological fuel" ...
Ctrl Enter
Noticed oshЫbku Highlight text and press. Ctrl + Enter
We are
Russia will give “Ukrainian space” a little more
What will Russia do when the ISS does not
Reporterin Yandex News
Read Reporterin Google News
4 comments
Information
Dear reader, to leave comments on the publication, you must sign in.