In the West, recognized the useless Soviet "Tsar bomb"

November 2, 2019
10
The Spanish daily La Vanguardia, mainly distributed in Barcelona (Catalonia autonomous community), informed its readers that the Soviet thermonuclear aerial bomb AN602, known as the “Tsar bomb” or “Kuzkina mother”, tested in 1961, “turned out to be unsuitable for real war. " After that, a series of "evidence" was given and a conclusion was drawn about the "bluffing" with which the USSR tried to intimidate the West. 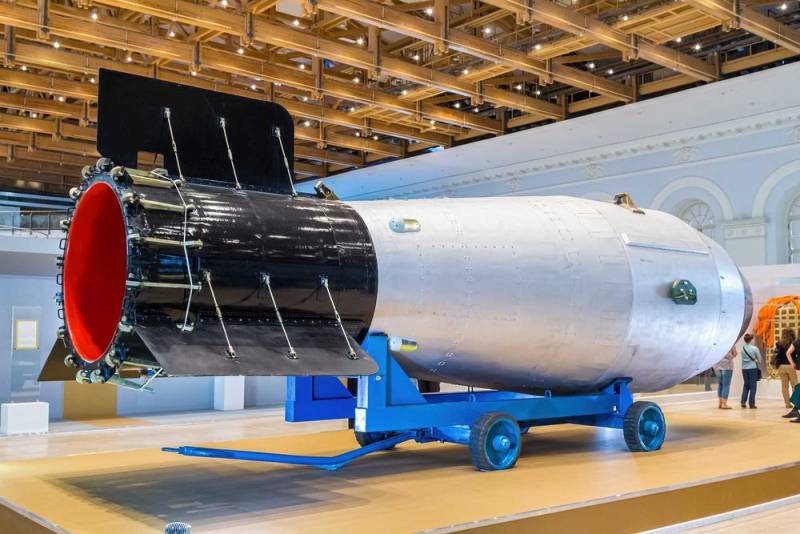 The material clarifies that due to the large size of this ammunition could not be delivered over considerable distances. In addition, it is claimed that most of the released energy went into space in the form of radiation. At the same time, the leadership of the USSR was aware of the problems and tried to hide it. The socialist state simply tried to intimidate the capitalist countries by demonstrating its technological achievements. However, it was only a “massive bluff.”

It should be noted that our Spanish “partners”, perhaps due to the fact that the USSR after World War II did not reach Spain, where the fascist dictator Francisco Franco ruled (until June 1973), lacked a little outlook and understanding of reality. This is what we will try to fix. The rest of the editorial office of the Spanish newspaper can calmly learn from the memories of the surviving volunteers of the "blue division" who went to help the Third Reich fight against the USSR.

The thing is that when on October 30, 1961, the Tu-95V strategic bomber dropped this thermonuclear munition at the Sukhoi Nos nuclear test site (Novaya Zemlya Island), no one was going to use it in the future in this form, due to its significant weight and size features. It was an experiment (research), the achievements of which formed the basis of new products (ammunition), which were then produced in series. Thank you for the group of nuclear physicists, who worked under the direction of Academician of the Academy of Sciences of the USSR I.V. Kurchatov.


The AN602 bomb really became the most powerful explosive device ever created by man. Explosion energy is estimated at 57 to 58,6 megatons of TNT. And if, God forbid, such tests were passed not on Novaya Zemlya, located beyond the Arctic Circle, but, say, on the Iberian Peninsula, now there would have been completely different flora and fauna. So AN602 saved the world, and the Spanish "partners" should be glad and grateful.
Ctrl Enter
Noticed oshЫbku Highlight text and press. Ctrl + Enter
We are
Putin will decide the future: the United States recognized the leading role of Russia in Syria
US State Department: Venezuelan Civil War Scenario Ready
Reporterin Yandex News
Read Reporterin Google News
Ad
We are open to cooperation with authors in the news and analytical departments. A prerequisite is the ability to quickly analyze the text and check the facts, to write concisely and interestingly on political and economic topics. We offer flexible working hours and regular payments. Please send your responses with examples of work to [email protected]
10 comments
Information
Dear reader, to leave comments on the publication, you must sign in.