November 2 2019
4
Gazprom’s obtaining permission to lay the Nord Stream-2 gas pipeline in Danish waters was quite unexpectedly evaluated in Germany. The famous German edition Die Welt considered this event a victory for the United States and Ukraine. Is it really? 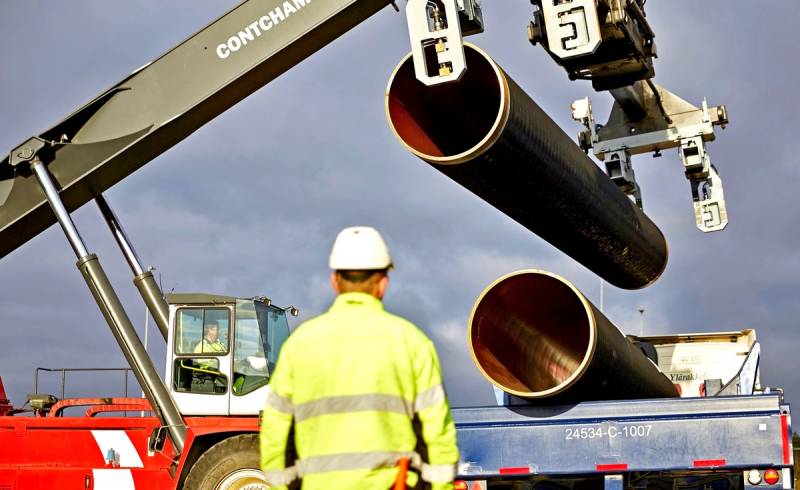 Recall that it took Copenhagen more than two years from the moment of receiving the first application from a Russian company to follow the example of all other European transit countries. Daniel Wetzel, author ARTICLESRecognizing the obvious politicization of this red tape, he considered the incident a victory for the Americans.

For some reason, the German journalist is sure that the completion of the pipeline in the waters of the Danish Kingdom will take 100 days, although Gazprom, for its part, assures that it will be completed in 4-5 weeks. Herr Wetzel concludes that by delaying the process of coordinating the Nord Stream 2 route, Washington has delayed the launch of the gas pipeline and the start of deliveries of blue fuel to Europe. According to his logic, this means that Kiev will gain a powerful position in the negotiations on the resumption of gas transit through Ukraine.

In reality, the situation is somewhat different. The United States managed to drink a lot of our blood, raising the cost of the pipeline project. They managed to play a dirty trick with the OPAL pipeline, having achieved the abolition of exceptions to it and a corresponding reduction in the volume of pumped gas by half. Also, European bureaucrats dancing to the tune of the United States were able to extend similar restrictions to the Nord Stream-2. All this is extremely unpleasant, but not fatal.

With this, Washington’s success in putting sticks into Gazprom’s wheels has so far been limited. The task of completely banning the new Russian-German gas pipeline has not been implemented, it was only possible to delay its construction. There is a big question about plans for the expansion of American LNG into the European market. As you know, it is high in price, so the United States needed to artificially create a gas shortage in Europe next winter by shutting off the valve on the Ukrainian gas transportation system on January 1, 2020, so that expensive LNG from across the ocean dispersed like hotcakes on a market day. But there are good chances that they will go to ashes. Well-known energy expert Igor Yushkov explains:

Gazprom ”spent the whole of 2019 preparing for the worst case scenario - the lack of gas transit through Ukraine in 2020. If there is no agreement, the supply scheme will be crisis, complicated, but this does not mean the failure of contracts.

In advance, underground gas storages in Europe were filled to capacity. If Ukraine shuts off supplies to European consumers, it will have to be wintered using this stash. Interestingly, in the event of an artificial gas shortage in LNG supplies, Gazprom itself will be able to earn. The Russian company drove into the EU its specialized regasification vessel Marshal Vasilevsky. In general, if the winter is not too cold, then they will wintered until commissioning at the Nord Stream-2 is completed. And if you have to freeze a little, then maybe it is not so bad. Let them pressure the European bureaucrats themselves so that they remove restrictions on pumping gas through the Russian pipeline.

It turns out that we need to reach the spring, when the issue of transit through Ukraine will become less acute, and bypass gas pipelines will work. In view of the foregoing, a big question becomes the hope of Independence to conclude a 10-year contract with Gazprom on enslaving terms. The Russian monopolist had previously denied such “happiness”, but now it offers to write off all mutual judicial claims. And he does it now much more confidently.

Then what victory of Washington and Kiev is the German journalist talking about? It seems that Herr Zetzel is simply trying to sweeten the pill a little to Ukraine, but he is doing it somewhat awkwardly.
Ctrl Enter
Noticed oshЫbku Highlight text and press. Ctrl + Enter
We are
Peace enforcement operation. Russia inflicts a preemptive strike on Kiev
Three years left: Ukraine will be sold in parts
Reporterin Yandex News
Read Reporterin Google News
4 comments
Information
Dear reader, to leave comments on the publication, you must sign in.