November 1 2019
12
A few days ago, the U.S. Air Force successfully returned the X-37B spacecraft to Earth. The mysterious drone set another record while in low Earth orbit for more than two years, 780 days. Given the obvious military focus of the American project, behind which the DARPA agency stands, it raises a lot of questions. 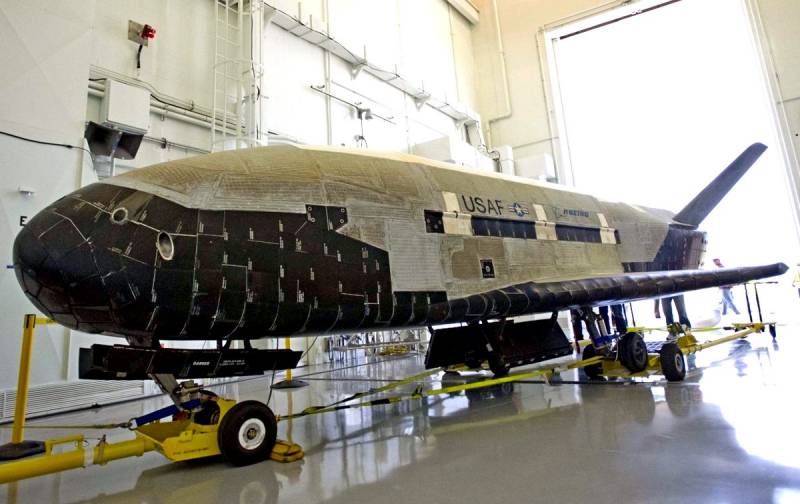 The Boeing X-37 was developed in the late nineties, initially through NASA. Visually, this orbital aircraft is a smaller unmanned copy of the Shuttle. However, in 2004, the project passed into the hands of DARPA, which in itself says a lot. This Pentagon structure responsible for developing breakthrough of technologies military and maintaining US superiority. It is significant that the agency was created in response to the launch of the USSR's first satellite. Therefore, it is not surprising that DARPA seized on a space drone. What advanced American developments should Russia be wary of?

Immediately we make a reservation that because of the increased secrecy, we have to be content with bits of information that allows us to conjecture everything else. Without claiming the ultimate truth, we indicate the following possible directions of experiments conducted in the orbit of the Boeing X-37.

At firstThanks to the capacious cargo compartment, a couple of thermonuclear warheads W87 / Mk21 can be placed on the American space UAV, which we will find out only at the last moment. Until then, the X-37B will spin in orbit for years. That is, theoretically, we have before us a prototype of a space strategic bomber, against which there is no adequate missile defense system yet.

Secondly, the drone is capable of performing active maneuvers in orbit. Heights are available from 200 to 750 kilometers. This is an extremely unpleasant feature for those who would like to “land” it if necessary. It also means that the Boeing X-37 is capable of approaching foreign spacecraft, reconnaissance satellites, and more. There is evidence that the UAV opened its hatches, from where the American microsatellite-cubsats could have come.

That is, the US Air Force was able to destroy or take control of the orbital military infrastructure of potential adversaries. By the way, during the implementation of the X-37B mission, the Russian GLONASS system lost three satellites. Other explanations are possible, but the coincidence in time is alarming.

Thirdly, the question arises, how does a drone manage to remain active and maneuverable in orbit for such a long time. In theory, its fuel reserves are very limited. It is possible that Americans are experiencing a new type of fuel or a type of engine, for example, electroplasma. According to indirect information, they work with a radiator called Advanced Structurally Embedded Thermal Spreader II, which can be used in nuclear engines or in laser systems (guns).

Finally, it is noteworthy that to launch a military drone, the American Falcon 9 rocket was chosen instead of the usual Atlas V, where Russian engines are located. The US Air Force is clearly against dependence on our country in its military projects, which also indicates a lot.
Ctrl Enter
Noticed oshЫbku Highlight text and press. Ctrl + Enter
We are
Civil hypersound: in Russia create a new spaceplane
Little "Buran", for which the Americans declared a hunt
Reporterin Yandex News
Read Reporterin Google News
Ad
The publication is looking for authors in the news and analytical departments. Requirements for applicants: literacy, responsibility, efficiency, inexhaustible creative energy, experience in copywriting or journalism, the ability to quickly analyze text and check facts, write concisely and interestingly on political and economic topics. The work is paid. Contact: [email protected]
12 comments
Information
Dear reader, to leave comments on the publication, you must to register.
I have an account? Sign in