The killers got to the Russian children: how to stop it?

October 31 2019
9
Nothing foreshadowed the troubles in the “Fairy Tale” kindergarten in Naryan-Mar (Nenets Autonomous Okrug). The children had already settled down at a quiet hour when an unknown man burst into the room, or rather, an unknown man. He stabbed a six-year-old boy. Straight to the neck. The child has passed away. 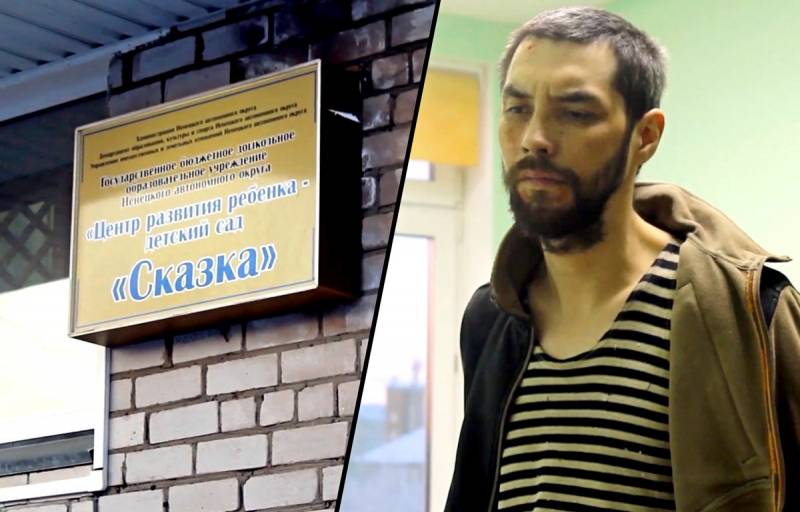 Fortunately, the offender was detained immediately. At first he did not say anything, since he was intoxicated. As it turned out, the guards let him into kindergarten, mistaking a father for some kind of child.

Took the boy for a monster, strangled the girl for a question

36-year-old Denis Pozdneev was registered with a narcologist. He treated alcoholism, but to no avail - continued to drink, while reaching a completely insane state. When Denis was sober a little, he began to testify - allegedly mistook the six-year-old boy for “demon” and “monster”, he heard “voices in his head”.

But these confessions of the detained criminal somehow do not fit well with the very unequivocal finds that the police discovered during a search of Pozdneev’s apartment. The man found sheets with information on the composition of the groups of the institution and the mode of its work. The criminal could very well prepare for his terrible deed. But then what? It turns out that about the clouding of reason, the late Pozdneev is lying, and he went to kindergarten knowingly, to kill?

In modern society, infanticide is considered an unimaginable, terrible act. Quite peaceful people are ready to tear apart a child killer, which not so long ago, by the way, they tried to do in Saratov. There, previously repeatedly convicted 35-year-old Mikhail Tuvatin killed a 9-year-old girl.

The reasons for the murder are as obscure as in the case of the tragedy in Naryan-Mar. Allegedly, the girl asked Tuvatin if he owned the garage in which he was, and the man, afraid that the girl might be the daughter of the owners of the garage he had arbitrarily occupied, killed her.

How to become infanticide

It is not in vain that infant killers in Russia are compared with the Nazis. Only the executioners of seventy-five years ago committed infanticide. Tens of thousands of Jewish, Slavic, Gypsy children were destroyed by the Nazis in the "death camps" and in gas chambers.

So, the Investigative Committee of Russia recently launched an investigation into the murder of children by the Nazis in an orphanage in Yeysk. Sonderkommando SS-10 "a" in 1942 - 1943 acted in the Krasnodar Territory and Rostov Region. She was led by the 35-year-old SS Obersturmbannführer (lieutenant colonel), Dr. Kurt Christman.

An educated man of good appearance, Dr. Christman - an athlete, an excellent student and a staunch Nazi - had a doctorate in jurisprudence and the title of German champion in canoeing. But these undoubted advantages did not prevent Christman from becoming a brutal murderer during the war years.

In Yeysk, Christman’s subordinates from the Sonderkommando ordered 214 children from the Yeysk orphanage to be ordered by the head of the Gestapo’s chief Lieutenant Bededeker. Christman, by the way, survived during the war and survived until 1987, surviving his victims for almost half a century.

Why did we remember Christman and his crimes? Of course, unlike Tuvatin and Pozdneev, Kristman was not repeatedly convicted as a marginal felon or an insane alcoholic. And the more terrible it is to realize the fact that even an educated, cultured person, himself a former family man, instantly turned into a brutal killer. But this circumstance alone makes us suspect literally every second of the propensity for criminal behavior.

Security is powerless, prevention is needed

After the crime in Saratov, Russia again raised the theme of the return of the death penalty. The tragedy in Naryan-Mar is another argument in the treasury of arguments of its supporters. But will the death penalty really help prevent such crimes? It is unlikely that the same Pozdneev, who saw the “monster” in the boy, would have stopped if he had known that the death penalty was returned for such crimes in Russia. Most likely, he simply did not think about anything when he was killing. After all, the death penalty of Andrei Chikatilo or Anatoly Slivko did not stop, in due time.

The main task is not to punish the criminal for an already committed crime. The main thing is that such crimes should not be committed at all. Or, at least, their number would be minimized. But what to do?

So far, we see that the existing system of protection of child care facilities is ineffective. Most private security companies send older employees or people without serious experience of law enforcement or army service to work in kindergartens, which, even with all their wishes, could hardly stop the offender. But the Rosguard platoon cannot be assigned to every kindergarten.

It is possible to equip lampposts, fences and gates with cameras, albeit expensively, but this is not a panacea. Remains prevention. The one that in Soviet times, albeit not very successful, but still engaged in the district.

Today, drug addicts and alcoholics, former criminals, people with mental disabilities are actually left to their own devices. No one is watching them, not figuring out how they live, not checking their mental state. The same Pozdneev, as it turned out, was dangerous for society, but calmly walked around the city until he killed the child.

It is not about restoring the death penalty or turning schools and kindergartens into sensitive facilities with armed guards, our authorities should think about it. It is necessary to revive the system of prevention and supervision of dysfunctional persons, to solve the most acute social problems of modern society. Only in this case it will be possible to hope for a reduction in the future of such terrible incidents.
Ctrl Enter
Noticed oshЫbku Highlight text and press. Ctrl + Enter
We are
What threatens us with the collapse of the Orthodox Church in Ukraine
Where is Russia going?
Reporterin Yandex News
Read Reporterin Google News
9 comments
Information
Dear reader, to leave comments on the publication, you must sign in.