October 30 2019
8
Western media continue to drive "roundabouts" around the Kaliningrad region, directly making it clear where the risk of a military clash between NATO and Russia is highest. What are their real goals? 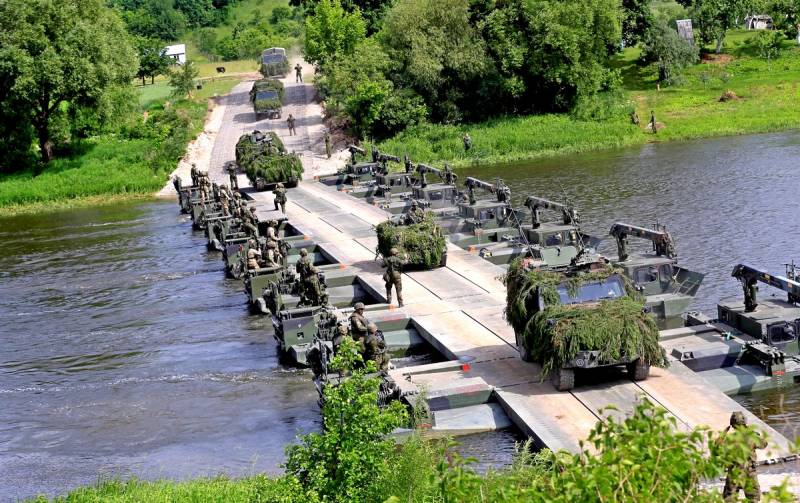 The famous publication The Daily Beast told its readers that the “Achilles heel" of NATO is the so-called Suwalk Corridor:

If the new Cold War gets hot, the Suvalki Corridor could be exactly the place where hostilities could begin.

The Suwalki corridor is a historical part of the Polish-Lithuanian Commonwealth, currently located in Poland. It is assumed that in the event of a war with NATO, the Russian military will have to “cut through” it from Belarus to the Kaliningrad region in order to restore connectivity with our exclave. In this case, the Baltic states will be cut off on land from other countries of the North Atlantic Alliance. Therefore, in theory, Suvalkia since 1991 is called the “Achilles heel” of the block.

It would seem that everything sounds quite sensible, if one argues in terms of the times of the Second World War. However, a few clarifications need to be made.

On the one hand, this area is one of the wildest in Europe, it is saturated with forests, lakes and swamps. There is no direct road from Belarusian Grodno to Kaliningrad. A swift march-throw may not work, because the corridor will have to be cut in the literal sense of the word.

Further, having been cut through, it will become a huge headache for the Russian Ministry of Defense, since it will have to be somehow guarded on two fronts for almost 100 km. The corridor will be shot through both from Europe and from the Baltic, and one can forget about some reliable supply of Kaliningrad by land. The hostilities of regular armies, special forces sabotage, partisanism will begin. The invasion of Polish territory could be a big strategic mistake for Russia.

On the other hand, The Daily Beast edition Jesuit is silent that the hypothetical cutting through of the Suvalki corridor will not be an act of aggression of Russia, but a forced response to aggression from NATO. After the collapse of the USSR, Kaliningrad was squeezed between the countries of the alliance. The Baltic Fleet of the Russian Navy is deployed on its territory, and the Iskander OTRK is deployed. Real military operations against our country will begin with blocking and attempts to defeat the territorial exclave dangerous for NATO.

But! All of the above is true for the strategy of the Second World War with its surroundings and the defeats of the boilers. For some reason, the Western media forget to mention that the Russian Federation has the second most powerful nuclear arsenal in the world, plus the “Putin rocket” is approaching in the foreseeable future. An attack on the Kaliningrad region will mean an attack on our entire country with all the ensuing consequences for the aggressor. Hardly well-fed and prosperous Europe is ready to take nuclear strikes to "clean up" Kaliningrad.

What do we have in the dry residue?

Attacks on the Kaliningrad region are only in the information space. Only a few NATO countries are interested in them: the USA, Poland and Lithuania. The latter would not mind increasing economic and military assistance from senior Alliance comrades.

But Washington needs an image of a “Russian threat” for Europe, for which tension around Kaliningrad is constantly escalating in order to provoke Moscow to increase its military presence on the western border. The result will be the rallying of NATO members who have long looked in different directions, the increase in military spending of the bloc in favor of the American military-industrial complex and the deployment of medium-range missiles in the Old World.
Ctrl Enter
Noticed oshЫbku Highlight text and press. Ctrl + Enter
We are
Ukraine from the inside: traitors, curators and those who watch from the Kremlin
Ten "defeats" of Putin
Reporterin Yandex News
Read Reporterin Google News
8 comments
Information
Dear reader, to leave comments on the publication, you must sign in.