Do not choke on “American pie”: how Lukashenko brings “Maidan” closer

October 30 2019
26
Recent statements by the Belarusian president about the “alienness” of the Great Patriotic War for his country and people not only caused a real shock in Russia, but also, perhaps, drew a thick line under doubts about the Minsk change political orientation. The most interesting thing is that, making such actions, more and more reminiscent of chaotic throwing in search of ways and means to maintain his own power, Alexander Grigoryevich inflicts crushing blows on the very same “bitch” on which he is sitting. Recently, he has made a lot of rash steps, each of which brings the “Maidan” closer in Minsk. 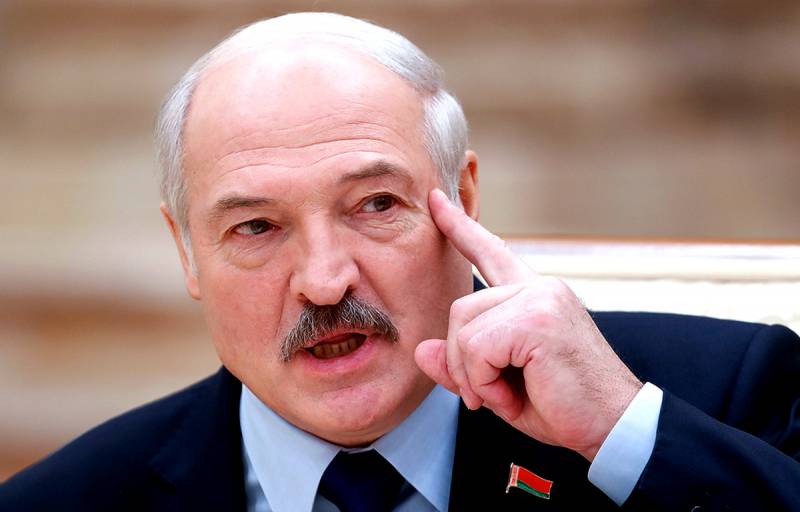 "Democracy" on the march

It is impossible not to notice - the past months were marked by an unprecedented revival both in Belarus and around it, of various kinds of “democratic forces” striving for a change of power in this country. Frozen in neighboring Poland, "Free Belarus", arranging there under the guise of rock concerts "in support of democratic change", the grooms of the Belarusian, Ukrainian and Polish "revolutionaries" who actively share their "Maidan" experience. In Warsaw, during the Boris Nemtsov Forum, which took place there on October 9-10, you gathered, you yourself understand who, with might and main there were calls "to quickly deal with dictatorships" not only in Moscow but also in Minsk.
In Belarus itself, an extremely unlikely gang with the more than predictable name “European Belarus” crawled out onto the streets, who began to picket and demand that Lukashenko immediately resign from his post. The leader of this gop company, with enchanting notch Polina Charendo-Panasyuk (!), Who covered Alexander Grigoryevich with a “dictator” on television, was, of course, already removed from the upcoming parliamentary elections. However, there are suspicions that this will only add to her street popularity.

Meanwhile, from October 25, the 60-minute film “Lukashenko. Criminal materials. " People are listening, and how ... In any case, on the corresponding YouTube channel, the number of views has exceeded one million. The well-known political brawler and dissident Zenon Pozdnyak, however, went even further - he scribbled and filed a rather lengthy statement with the Prosecutor General’s Office and the Investigative Committee, in which he accused the incumbent of “gross abuse of power” and other “illegal actions”. And nothing, accepted ... There are bad symptoms and a different sense. So, on October 13, the “Council of Researchers of Communist Terror” was created in Minsk! This, of course, is not yet an official level, but is it far from such “civic initiatives” ”to the first“ museum of Soviet occupation ”? As the practice of the same Ukraine and Georgia shows (I’m silent about the Baltic states), the distance is less than half a step away. Is it worth wondering after that the statements of Alexander Grigoryevich himself about "not our wars" and even "imposing whip and attempts to kneel down"? It is quite natural, in my opinion. Looking forward to the first scrambled eggs fried in Minsk at the Eternal Flame? In Kiev, this is where it all began ...

Passions do not stop around the notorious "tax maneuver" that cuts sensitive nature of Lukashenko more than a sharp knife. The figures of “terrible losses” that this fair and, perhaps, even belated decision of Moscow bears the Belarusian the economyare broadcast so loudly and widely that only deaf can not hear them in the country. For example, Svetlana Gurina, deputy chairman of the Belneftekhim concern, recently gave a rather lengthy interview on this subject, in which she not only spoke about the “additional costs” of $ 320 million that Belarusian refineries are expecting next year and the price increase for them of Russian “black gold” "By 17.7 dollars per ton. She also clarified that this, of course, “would constitute a threat to the competitiveness of Belarusian oil products”. Further, shocking figures came into play - 10-11 billion dollars of “losses” that Belarus will have to bear for all years of the “tax maneuver” (2019-2024). And the quite expected talk about "the search for alternative sources of energy supplies." By the way, the Belarusian economist Leonid Zlotnikov commented on such sentiments best of all, declaring bluntly:

We demand that Russia at its own expense, by lowering the living standards of its population, feed Belarus ... so that it, taking the funds from its budget, give them to the Belarusian.

Those wishing to assist Minsk in "diversification of oil supplies" are available. Even in abundance. Such a readiness was expressed, for example, by the President of Lithuania Gitanas Nauseda, while not refraining from the caustic hairpin to the address of the neighboring country: we supposedly will help them “preserve at least a part of independence”. And there, Prime Minister Saulius Skvernyalis last month even discussed with his Polish counterpart Mateusz Moravecki "projects that could help Belarus achieve energy independence from Russia." It is clear that both the Lithuanians and, first of all, the Poles thus want to not only annoy Moscow, but also make good money. Lithuania, too, is ready to supply oil to Belarus if it also refuses Russian gas by switching to American LNG, delivered through the terminal in Klaipeda. A tempting offer, isn't it ?! The most interesting thing is that, while fanning the passions of the “tax maneuver”, Minsk officials, in fact, repeat nothing more than the postulates of the report prepared by the International Monetary Fund specialists, which have recently suddenly become “worried” about the prospects of the Belarusian economy. They sharply worsened the forecast for economic growth in Belarus in 2020 - to 0,3% from 2,2%. Moreover, it is emphasized that the "main risk" for Minsk in this situation is the "lack of compensation by Moscow for the consequences of the" tax maneuver ".

Do not choke on an American pie ...

The forced rapprochement between Minsk and Washington, which has recently become a byword, causes, at least, bewilderment. No, not regarding its reasons. This is where everything is very clear - the receiver from the field of cheap classics in the style of "how to cause burning jealousy." Another thing is surprising. Is Alexander Grigoryevich unaware of the “round table” held at the beginning of this year at the Center for European Policy Studies (CEPA) in the USA with the extremely promising (for him) name “Luka's Game” ?! Either the “game of Luke”, or the “game of Luke” - understand how you know. What kind of games do the Americans intend to play with him, except for a fool? Or maybe Lukashenko is not aware that no one in Washington thought to repeal the “Act on Democracy in Belarus” or the “Act on Democracy and Human Rights” adopted by the US Congress in 2004 and 2011, respectively? But both of these legislative documents declare him a dictator and proclaim the official US policy of “carrying out democratic reforms” in Belarus. The main one of these, undoubtedly, is the removal from power of just Alexander light. Moreover, the removal carried out by any available and possible means. The American emissaries who have now spread to Minsk do not at all aim to support the “regime” operating there, as they say. Rather, exactly the opposite. Allowing Washington to increasingly use itself as an anti-Russian tool, Lukashenko is digging a hole for himself, and he is doing this with the scope and intensity of a good excavator.

An extremely alarming example in this series is the situation that has developed with the transfer of units of the US armed forces to the Belarusian border. At first, Alexander Grigorievich reacted to the appearance of the “American armored fist” in neighboring Lithuania in the usual manner, that is, sharply. Even something there said about the "inevitable answer." True, he "lost momentum" almost instantly, specifying that the Belarusian army "would not rattle with arms." And how did it end in the end? A peaceful, practically friendly meeting held in Minsk with the participation of Secretary of State of the Security Council of Belarus Stanislav Zasy and US Charge d'Affaires in this country Jennifer Moore. We had a nice talk, “exchanged views on the situation in the field of arms control and strengthening confidence and security measures” (according to local media). That’s the whole “answer” ... By the way, some people call Zasya the most acceptable, in the eyes of Washington, Lukashenko’s successor. Very similar, the way it is. The United States continues to hold Minsk with the iron grip on the most sensitive places. October 22, the US Treasury did not lift sanctions against a number of Belarusian petrochemical companies, but only once again extended their "suspension". Nobody is going to remove Lukashenko from the sanction hook. But Alexander Grigoryevich himself, through his actions, risks raising doubts in Moscow about the last, perhaps, paragraph regarding his own loyalty - as a reliable military ally.

There is nothing surprising in the fact that, having been taught by repeated bitter experience, Russia begins to occupy increasingly rigid positions in relation to the “fraternal country”. Minsk complains that it is impossible to achieve the expected tranche of $ 200 million from the Eurasian Fund for Stabilization and Development. Most likely, there will be no loan of 600 million from Moscow. However, instead of correctly perceiving these assumptions and finally making real steps towards the integration process, more and more strange games are played in Minsk, voluntarily or involuntarily repeating step by step the actions of Viktor Yanukovych of the 2012-2013 model. What do they want to achieve by fanning the panic around the consequences of the “tax maneuver” and, if not encouraging the flimsy “popular protests” against integration with Russia so far, then at least looking at them through the fingers? To create public opinion for a reversal to the West? Well, so one “great European integrator” mentioned above was already being built up ... Flirting with his own anti-Russian forces and fawning in front of the USA, Lukashenko makes worse for himself, not Moscow. Both those, and others, most likely, will perceive what is happening as a sign that his “dictatorial power”, which had seemed unshakable yesterday, was staggering and bursting at the seams. And then the "Maidan" in Minsk will be only a matter of time.
Ctrl Enter
Noticed oshЫbku Highlight text and press. Ctrl + Enter
We are
How Ukraine break Putin's plan: six tips Zelensky
Ten "defeats" of Putin
Reporterin Yandex News
Read Reporterin Google News
26 comments
Information
Dear reader, to leave comments on the publication, you must sign in.