October 29 2019
7
The other day, the United States pompously reported on the liquidation of the leader of the ISIS terrorist group banned in Russia (banned in Russia) Abu Bakra al-Baghdadi. According to President Trump, everything was arranged, as in a Hollywood blockbuster with the corresponding authenticity. All this raises a lot of questions. 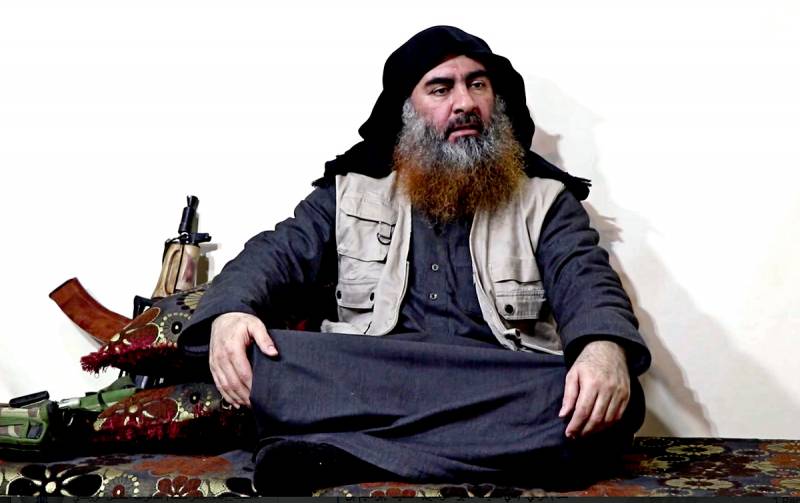 According to the voiced story, brave American rangers in eight helicopters flew from Jordan to the Syrian province of Idlib, and there, with specially trained evil dogs, they drove the terrorist leader into a tunnel where he preferred to blow himself up so as not to die a vile death from fangs. At the same time, the body is disfigured so that it could be reliably identified only thanks to a DNA test, which resourceful Americans were able to conduct in just 15 minutes on the spot. Phew ...

Rounding out the big picture of the message that this “movie” was broadcast live by President Trump personally, along with Vice President Pence, the heads of the State Department and the Pentagon, and several generals:

I wonder if there was popcorn. The story is crowned by touching details that the children were saved, and the American rangers escaped with minor injuries. But the service dog, poisoning al-Baghdadi, suffered. It remains, according to the laws of the genre, to sniff about the fate of a devoted friend of a person, since it is impossible to do without losses.

The warm lump in the throat closes with words of gratitude to the head of the White House for the Kurds and Russians who helped with intelligence and did not impede American heroes in their brilliant operation. The final touch - the body of the murdered al-Baghdadi was thrown into the sea, so no DNA re-examination could be done.

In general, the US president is supposed to take a word. Like the fact that the Americans flew to the moon.

You can, of course, timidly ask the question, what did the leader of ISIS do in the territory controlled by a hostile group? It is approximately as if the Nazi criminals in May 1945 decided to hide not in Argentina, but on the territory of the USSR. But the choice of location was politically correct: under the noses of “stupid people from Turkey and Russia”, who are required to at least not stop the American rangers from doing their job. And the time was chosen beautifully, all the media write about the US defeat in Syria, and so attention is being drawn to their victory, the elimination of "terrorist number one."

Quite a strange way to eliminate by baiting dogs in a tunnel. It’s not a secret that American executioners sometimes do this with their prisoners in Guantanamo prison during interrogations, but do this to the person on whom the "death row" could actually have been? Unusually. Wouldn’t it be easier to put tear or sleepy gas to take it alive and bring it to justice? He hardly carried a gas mask with him all the time.

Okay, why get itchy like "Badcomedian" when parsing another "cranberry". Assuming that Abu Bakr al-Baghdadi really died, does this mean the complete defeat of ISIS?

Probably not. Thanks to the military operation in the SAR and Iraq, the group’s quasi-state was liquidated, but people with ideas remained. They moved to a network structure and are spreading around the world. Their spiritual leader, Abu Bakra al-Baghdadi, is perhaps truly dead. But his sermons and prerequisites for the emergence of terrorism remained - poverty and social inequality. Therefore, sooner or later, the new “Baghdadi” may take the vacant place of “terrorist number one”. And everything will go in a circle.
Ctrl Enter
Noticed oshЫbku Highlight text and press. Ctrl + Enter
We are
Ukraine from the inside: traitors, curators and those who watch from the Kremlin
Ten "defeats" of Putin
Reporterin Yandex News
Read Reporterin Google News
7 comments
Information
Dear reader, to leave comments on the publication, you must sign in.