October 27 2019
10
As expected, the Americans did not completely withdraw their forces from Syria, allowing Russia and Turkey to take control of the north of the ATS. Instead, they even increased their presence in the province of Deir ez-Zor, having brought Abrams and special forces tanks there. Previously, it was believed that the Pentagon was holding a corridor on the border with Iraq, where the US military was redeployed, for strategic purposes. However, now it turned out that the matter was banal theft. 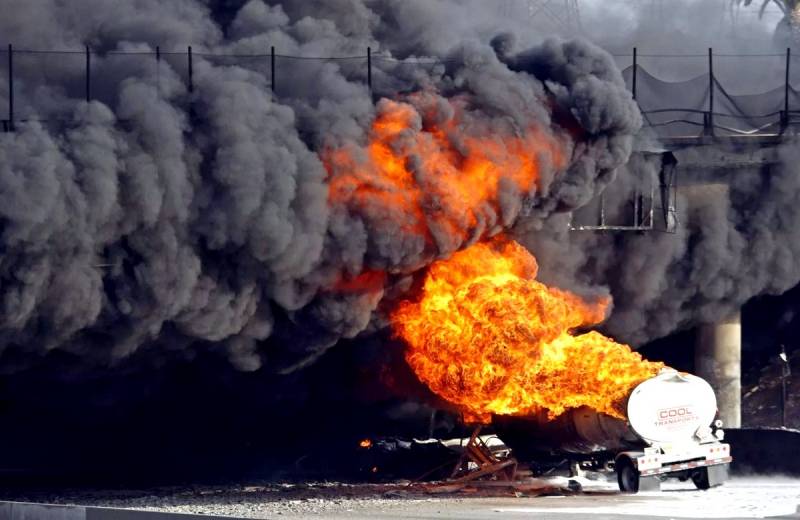 They exposed their foreign counterparts to the Russian Ministry of Defense by publishing space exploration pictures showing how the columns of fuel trucks regularly transport valuable raw materials from Syrian oil fields to neighboring Iraq, where American companies accept and resell them. According to the most conservative estimates, the monthly income from such "economic activity" can reach $ 30 million, but in reality it can be several times higher.

Before us is natural robbery in its purest form.

The province of Deir ez-Zor is quite rich in oil. The presence of deposits and an oil refinery made it a tasty product. At first, militants of the ISIS group banned in Russia took control of it. In 2017, the United States was able to repulse it from the terrorists by the hands of the Kurds. Last February, a detachment of the Russian PMC "Wagner" tried to return the oil fields and oil refineries to Damascus, but was brutally defeated by American aircraft. Loss data is very different. The deaths of several of our compatriots have been officially recognized, but President Trump has explicitly stated “hundreds of killed Russians.”

The United States does not intend to give Syrian oil to the Syrians. Currently, the infrastructure is under the protection of US military and private security companies. Hydrocarbons are mined by the invaders without any permits and taxes and are removed through the corridors to Iraq. There it is legalized under the guise of a local and sold, giving everyone involved super-profits. If this is not the theft of another's property with the subsequent sale of stolen goods, then what is it?

The Americans themselves cynically justify their presence in the oil fields by the need to protect them from terrorists, and the proceeds from the robbery, according to Donald Trump, supposedly go to the aid of the Kurds:

We’ll come up with something for the Kurds to have money. Perhaps we will ensure the arrival (in the region) of one of our large oil companies so that everything is done properly.

It is possible that something for the Kurds falls away from the main cash flow, but it does not change the essence of the matter at all, military expert Igor Korotchenko explains:

From the point of view of international law, this is a egregious thing. Being illegally in the territory of another country, and this is a fact of armed aggression, and still extract oil and receive money for it, use some kind of transportation schemes, for the United States - this is a spot on the reputation.

What is such a reputation? For many people, the United States has only confirmed its reputation. The question is, what next? Watch how the interventionists quietly export oil?

There are not so many options besides conviction. You can recall how the Russian Aerospace Forces stopped a similar trading scheme between the Turks and the militants by bombing a column of fuel trucks. In principle, the trucks moving towards Iraq do not say that they are American, and if a star-striped flag does not fly above them, then the aircraft of Russia or Syria may well take them for terrorists. However, there is a risk that they will answer, the Wagnerites will not let you lie.

But there is a chance that the Americans themselves will decide to leave when the earth begins to literally burn under their feet. If terrorist attacks are constantly being carried out on their objects and columns of fuel trucks, for the sake of protection from which they are supposedly located there, the business scheme will cease to be attractive, and the interventionists will eventually leave, leaving control to the Kurds. And Damascus will agree with them.
Ctrl Enter
Noticed oshЫbku Highlight text and press. Ctrl + Enter
We are
Ukraine from the inside: traitors, curators and those who watch from the Kremlin
Ten "defeats" of Putin
Reporterin Yandex News
Read Reporterin Google News
10 comments
Information
Dear reader, to leave comments on the publication, you must sign in.