Will the U.S. Army support Trump in a civil war?

October 26 2019
4
A presidential election will be held in the United States in a year, at which it will be determined whether the "imperial" Donald Trump will continue to build a sovereign "America first", or whether the "globalists" in the person of the Democrats will take revenge. The latter, obviously not appreciating their chances too high, initiated the impeachment procedure of the incumbent president. In response, Trump said that an attempt to remove him could lead to a new “civil war”, from which the US may never recover. 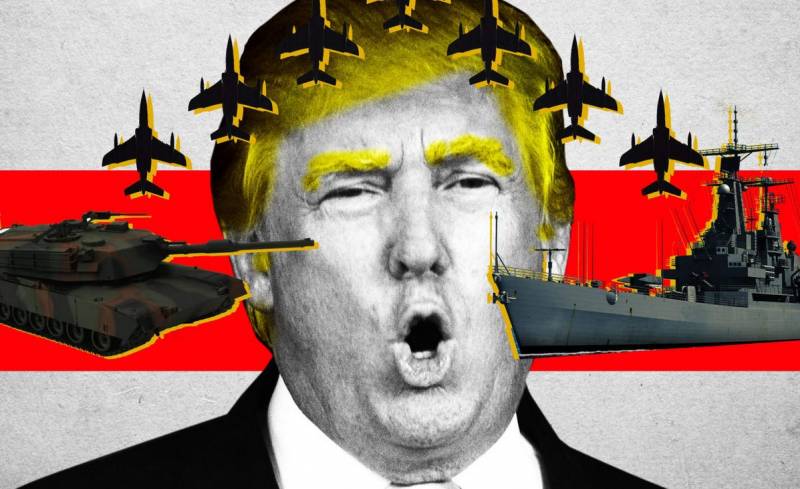 The words of the head of state indicate a serious internal crisis of a leading world power, which in principle can even lead to the collapse of the United States. The election of Donald Trump sharply split American society: some warmly support him, others literally hate him. If impeachment still takes place before the next election, Trump will have to leave the White House. But, judging by the statement of the president himself, he believes that a significant part of the country's population will support him with arms in hand and will go against the US Constitution.

In such a situation, everything will be decided on whose side the army and other power services will be. About what the mood in the US Armed Forces, shared in article The Daily Beast, Patricia Ravalgie, a former Red Team analyst at US Central Command (CENTCOM). This "red team" is designed to test the readiness of personnel by creating or simulating external threats. We present its conclusions in the form of generalizing theses.

According to Rawalgea, the American army is as split inside as society, which is not surprising. She sincerely wonders:

Donald Trump is all that the US military should despise: a dodger, a weak, lazy, ignorant, walking joke for decades and the star of a reality television show.

Despite this, he is very popular among the military. At the same time, the ex-analyst notes a discord between the generals who served under his predecessors, Barack Obama, and ordinary military personnel. Trump has publicly stated the following:

I know more about ISIS than generals. The generals turned into junk. They are dilapidated to such an extent that it disgraces our country.

Patricia Rawalgea is outraged that showman Trump, who has not served in the army for a day, publicly insults four-star generals like Colin Powell, Michael Hayden, John Allen, Martin Dempsey and Stanley McChrystal. The latter, considering Donald Trump a threat, supported Hillary Clinton, criticizing the amateurish approach of the Republican. The ex-analyst notes that the president and his own appointees, James Mattis and John Kelly, did not work out.

Surprisingly, despite the rout of the generals, among the main personnel of the American army, the popularity of Donald trump is very high. US troops themselves repeat the slogans of the conspiracy theory of the “deep state”, according to which “Obama is a black Muslim,” “Hillary killed a lot of people,” and “the CIA and the FBI are corrupt.” Informally, you can hear the opinion that "the US military hates Obama," and with it all the Democrats. Note that the racial question still mixes with everything. Black American soldiers stand for Obama and his followers, whites are usually against.

Why is the hostility towards the Democrats in the US Army so strong? Ravalji notes that Obama ruined everything with the so-called "nuclear deal" with Iran. Previously, the US military was preparing for a war against the USSR, which never took place. Then their attention shifted to other countries: Iran, Iraq, Syria, Afghanistan.

The invasion of Iraq spawned the emergence of ISIS banned in Russia. Obama has not punished the regime of Syrian President Bashar al-Assad. With regard to Iran, he is blamed for the fact that the lifting of sanctions allowed Tehran to earn $ 100 billion, which went to strengthen the Iranian army and the IRGC, making them a tighter nut. And the wars in Afghanistan and Iraq, which affected many American families, where there were losses, led to a split between the army and civil society in the United States. Under Trump, the American military often began to make derogatory remarks about the allies in the Western coalition - the British, Germans, French and others. The very members of NATO in the United States are now called with ease the president "freeloaders."

So what can happen if Donald Trump decides to go against the Constitution during impeachment? The conclusions of Patricia Rawalji are alarming:

Most military personnel are honest, patriotic Americans who will never take part in such a scheme, despite all their support for Trump. But a significant part can.
Ctrl Enter
Noticed oshЫbku Highlight text and press. Ctrl + Enter
We are
How Ukraine break Putin's plan: six tips Zelensky
Ten "defeats" of Putin
Reporterin Yandex News
Read Reporterin Google News
Ad
We are open to cooperation with authors in the news and analytical departments. A prerequisite is the ability to quickly analyze the text and check the facts, to write concisely and interestingly on political and economic topics. We offer flexible working hours and regular payments. Please send your responses with examples of work to [email protected]
4 comments
Information
Dear reader, to leave comments on the publication, you must sign in.