October 25 2019
10
90 years ago, the United States experienced a stock market crash called “Black Thursday”. The financial crisis has shifted to economic, which marked the beginning of the Great Depression, which ended, by and large, only with the outbreak of World War II. Inevitably, historical parallels with modernity lead to bad thoughts. 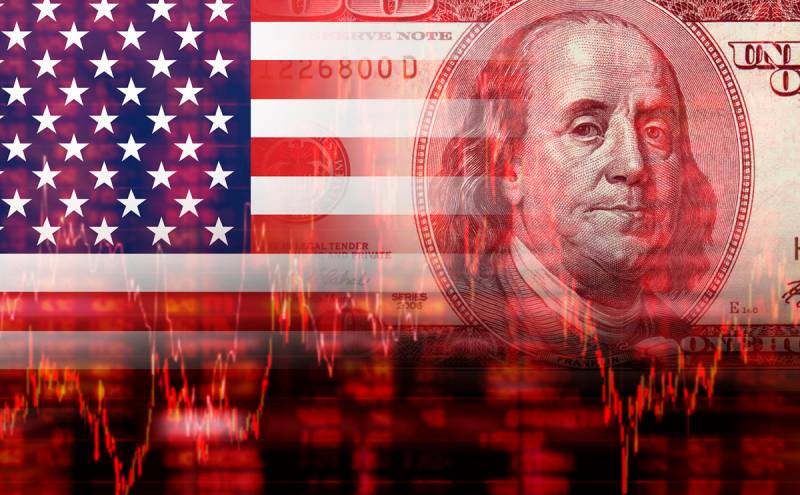 It is hard not to notice that the United States of America, conveniently located safely away from the ocean, is the main beneficiary of global military conflicts. In 1913, this country had a negative foreign trade balance and owed a tidy sum, but with the outbreak of World War I, everything changed dramatically. American bankers began to provide loans to all warring parties that went to buy weapons, ammunition and ammunition produced in the United States itself.

Great Britain and France, the former largest lenders, themselves became debtors, and their place was taken by "overseas cousins." By 1929, the States were the richest country in the world. The economy accelerated, stock prices rose. The population also "gained fat." Millions of Americans were able to buy cars, got an expensive home technique. An expensive dollar made them "kings of life" when traveling around Europe and to other states.

But this success had its own flip side. High inflation ate interest on deposits, making them unprofitable. The overgrown middle class began to massively play on the stock exchange, speculate with real estate, financial pyramids appeared. Distraught people took loans from stock brokers, believing that growth would continue indefinitely. The economic bubble began to crack already in September 1929, and reached its peak collapse on October 24, on Thursday, which became "black."

The stock price crashed, setting a yet-broken record. Total losses amounted to 74 billion "those dollars." Banks began to go bankrupt, enterprises lost credit lines and stopped working. People massively became unemployed. Over the next three years, industrial production decreased by 56%, and exports - by 80%. Banks ruthlessly drove the ruined farmers out of the land, sending them to wander in agony. The monotowns, which depended on the city-forming enterprise that had closed, were almost extinct. Poverty, suicide, rampant crime, hunger, death - this is what the Great Depression brought to the United States.

President Franklin Roosevelt is believed to have pulled America out of this quagmire. As part of his “new course,” labor camps were created, the dollar devalued, gold was confiscated, and the largest banks gained access to state money. However, in reality, the beginning of World War II made the greatest contribution to the acquisition of superpower status by the United States.

After the German attack on Poland, its gold reserve migrated to France, where Belgian gold also turned out to be. Due to the inevitable surrender of Paris to Berlin, French, Belgian and Polish gold was exported to Africa, and from there in 1943 ended up in Fort Knox's vaults. A part of the Norwegian gold reserve was also transported there. In addition, the European bourgeois independently transferred their assets and values ​​to a safe USA.

American corporations were incredibly rich in military contracts, and some of them did not disdain cooperation with the Third Reich, which is not customary to recall now. Once again, a proven scheme worked: lending to European countries for the purchase of American goods. After the end of World War II, the United States took control of the Old World through the "Marshall Plan", becoming a superpower. And the victory of the United States in the Cold War with the collapse of the USSR allowed them to rob the former countries of the social camp.

It would seem that everything is good for the Americans now. But there are certain parallels with the situation in the late twenties of the last century. The dollar is strong again, the debts are exorbitant, the population is on credit, the financial sector is blowing obvious “bubbles”. In the United States itself, more and more economists are talking about the risk of a recession and the ensuing economic collapse, which will come back around the world. And how Washington prefers to get out of the pit, we already know.
Ctrl Enter
Noticed oshЫbku Highlight text and press. Ctrl + Enter
We are
US decides to trade war against Europe: Airbus under attack
Three years left: Ukraine will be sold in parts
Reporterin Yandex News
Read Reporterin Google News
Ad
The publication is looking for authors in the news and analytical departments. Requirements for applicants: literacy, responsibility, efficiency, inexhaustible creative energy, experience in copywriting or journalism, the ability to quickly analyze text and check facts, write concisely and interestingly on political and economic topics. The work is paid. Contact: [email protected]
10 comments
Information
Dear reader, to leave comments on the publication, you must to register.
I have an account? Sign in