US vs. Russia: clash in the Arctic becomes inevitable

October 25 2019
8
This month was marked by two important statements made on both sides of the Atlantic and not just united by one topic, but directly related to each other. In fact, the military departments of both Russia and the United States simultaneously declared their claims to the Arctic region. As practice shows, when representatives of powers make such demarches, and without that, to put it mildly, they do not have warm feelings for each other, nothing good can be expected. In particular, if not diplomats, but people in uniform, initially enter into a dispute. 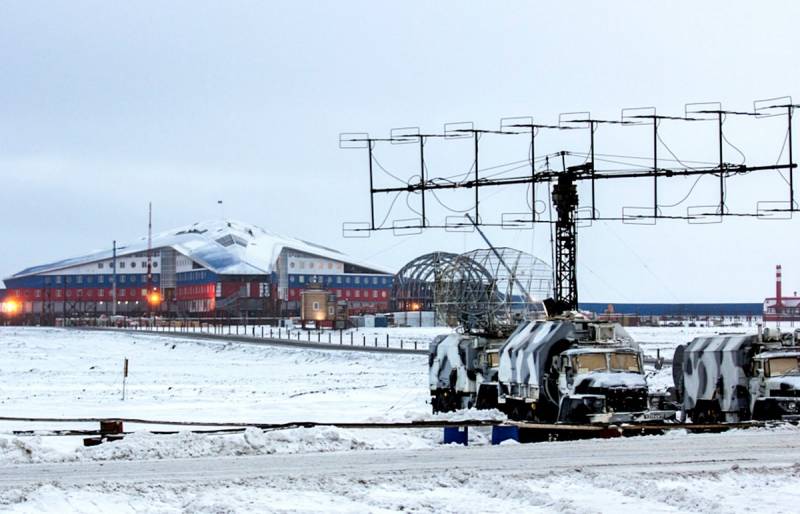 How great is the likelihood of a direct clash in the open spaces of the Far North with the United States and its allies for our country? What will be the parties' chances in this case, and what kind of conflict could result in this?

Is the Arctic Russian or a draw?

As for Russia, literally this week, at a meeting of the Maritime Collegium under the domestic government, new data from studies conducted by our Ministry of Defense were announced. Deputy Prime Minister Yuri Borisov described them as "comprehensive evidence" that the shelf of the Arctic Ocean belongs to our country and to no one else. To whom, and for what reason should we prove? Formally, more and more new “updated scientific data” are required by the United Nations Commission on the Limits of the Continental Shelf (CLCS), since 2001 the country has been “bombarding” the application for expanding its Arctic borders. The essence of the claim, in short, boils down to the fact that the underwater ridges of Mendeleev and Lomonosov are nothing more than a direct continuation of the Eurasian continent. Therefore, this is our territory! Despite the many times the evidence has been provided, the UN has not taken the appropriate decision, neither rejected nor satisfied the Russian requirements. This led to the fact that in 2015 the application was re-submitted - and on a much larger scale, by 1.2 million square kilometers. And again, old songs about the "lack of material for a final decision." But maybe there is enough data now ?! However, it is doubtful ...

Indeed, in fact, the United States and its allies are opposing the strengthening of Russia's positions in the Arctic with all their might. The UN in this case (as in most others) only obediently follows the instructions coming from the White House and the State Department. And there they are extremely determined. Indeed, with a bad memory of the 90s of the last century, Americans are firmly convinced that these lands and waters are their patrimony. “Thank you” for this we can say to Mikhail Sergeyevich Gorbachev, who back in 1987 committed another betrayal of his country by coming up with the so-called “Murmansk Initiative”. At the same time, the USSR secretary-killer promised the world community he adored not only the complete demilitarization of the Russian North, but also the opening of the Northern Sea Route for everyone. Free of charge. That is - for nothing ... It is clear that in Washington they categorically disagree with a cardinal change in the position of the Russian leadership, which had absolutely no intention of either sacrificing the country's security and strategic interests, or scattering its wealth rightfully. According to the Americans, the Arctic should become a kind of "free shipping territory", while remaining in the status of "zone of vital interests of the US national security." An interesting movie turns out: it seems to be a "neutral zone", but under the clear patronage of Washington. That's just not to happen.

Where will the Northern Sea Route lead

Currently, the main "bone of contention" for world powers is precisely the colossal water transport route stretching over 14 thousand kilometers (from Vladivostok to St. Petersburg), the prospects of which are universally recognized throughout the world. Yes, today, the transportation of goods by the Northern Sea Route, according to economists, is still 36% more expensive than following the centuries-long beaten road through the Suez Canal. However, you can’t argue with geography - the route through Suez is one and a half times longer (23 thousand kilometers) and sooner or later the NSR will inevitably become more profitable. So far, the infrastructure is “lame”, extremely harsh conditions along the route play a negative role, but it should be remembered that every year the Arctic ice is melting and the navigation period in our northern latitudes is becoming longer. In addition, the country's leadership, realizing the need to attract world carriers to the Northern Sea Route, is not idle. Thus, the Deputy Minister for Development of the Far East and the Arctic, Alexander Krutikov, recently announced the government’s intentions to create a company of the state container cargo operator, which will not only cover the risks of carriers associated with following the Northern Sea Route, but also for a certain time (possibly a whole decades) also their costs directly related to the transportation of goods.

Nobody is hiding their goals - to lure the world's leading logistics companies from the Suez route to ours, to make the Arctic transportations more profitable and commercially attractive. And there the preferences, of course, will end. It is unlikely to manage without this forced measure. Indeed, as of 2017, for example, the NSR cargo turnover was 5 thousand times inferior to Suez! With such a gap, we will fight more than one generation for the status of the main sea gate of the world ... However, of course, there is a future for the Northern Sea Route. Otherwise, the United States would not have shown such unhealthy activity aimed at, if not taking it under its control, then at least blocking it more reliably. Here, by the way, in addition to the purely “Russian” factor, there is also a “Chinese” one: in Washington, they fear that the NSR will facilitate even more massive penetration of goods from the Middle Kingdom into Europe, which will make it faster and cheaper to deliver it. One way or another, it’s just the undisguised intentions to “cut off” the Northern Sea Route through the new “Arctic Doctrine” recently submitted by the Pentagon for approval by the US Congress, which has been discussed since this summer. This extremely aggressive document refers, in particular, to the creation of an “even more flexible and deadly grouping” of the US armed forces, which has to provide a military advantage not only on the sea routes washing Iceland, Greenland and Norway, but also in the Bering Strait. In fact, American warriors proposed a concrete plan to block our Arctic transport artery.

It's getting hotter in the ice

Unfortunately, the United States is not at all limited to loud words. So, this month, the USS Donald Cook, who, according to the official report of the Sixth Fleet of the US Navy, carried out an “operation to patrol maritime security and monitor Russia's maritime activities” for a long time hung around the Arctic Circle. That is, he was spying. Generally speaking, the Pentagon has at least two problems in the matter of the Arctic confrontation between Russia. Firstly, this is the absence in the region of a sufficient number of any serious military infrastructure facilities. Yes, there is something: the same Adak base in Alaska, the Thule base in Greenland, which Washington, judging by Donald Trump's memorable statements, would not mind turning a cavity into its own bridgehead, an air base in Norway ... However, with Russian Arctic outposts all this does not go to any comparison. The second problem is the fatal lag of the United States from our country in the field of the icebreaker fleet. Even if we assume that the plans for the accelerated creation of three heavy ships of this class and a certain number of small-tonnage ships capable of sailing in the far North will be implemented, it will look pale against the background of four dozen Russian icebreakers. Crossing last year, for the first time in nearly 30 years, the USS Harry S. Truman aircraft carrier made a spectacular breakthrough during the Trident Juncture exercises. However, how much sense will there be in these latitudes from a floating airdrome with steam catapults, which are completely unsuitable for the local temperatures?

Based on the foregoing, the United States really does not have many options. One of them is an attempt to "cut" the NSR away from too extreme edges. For example, in the areas of the “bottleneck” of the Bering Strait, or off the coast of Norway, at the exit to the Barents Sea. It is not without reason that Oslo's military activity, spurred by Washington, has reached such limits that it aroused concern of the Russian Foreign Ministry, which was recently made an official statement. There is, however, another scenario, much more dangerous. Suspicions about him are suggestive of a planned increase in the “lethality” of the US military group in the Arctic. As if some people in the Pentagon were not tempted there, far from their own shores and densely populated territories, to "teach a lesson" to Russia using, for example, tactical nuclear weapons of low power. In any case, negotiations are already underway on the deployment of medium-range missiles in Japan. Will they only be sent to China? Incidentally, the batteries of our anti-ship missile systems are an additional factor that minimizes the capabilities of the US Navy in the same Bering Strait. The recent firing of the Bastion in Chukotka, during which the Onyx hit a target at a distance of 200 kilometers, is a very clear allusion to this. But the deployment is already the third in the Arctic most powerful radar "Resonance-N", capable of tracking not only cruise and ballistic missiles, but also "stealth aircraft" from stealthtechnology and even targets at hypersonic speed are a confirmation that our military is seriously considering the danger of the US attempting to launch a surprise missile-bomb strike in order to get ahead of Russia and seize a strategic initiative in a possible conflict.

The United States and its allies seem to seriously intend to enter the fray for the Arctic. There is enough evidence for this, and one of them is the recently announced intention of NATO to purchase sets of equipment and uniforms designed to operate at temperatures exceeding 40 degrees below zero by almost 80 thousand troops. Best of all, in my opinion, they commented on these plans at the Permanent Mission of Russia to the North Atlantic Alliance, advising the warriors there, instead of throwing 70 million euros into the north wind, to buy good books on military history. For example, about the battle of Stalingrad. You can’t imagine more appropriate advice in this situation.
Ctrl Enter
Noticed oshЫbku Highlight text and press. Ctrl + Enter
We are
Ukraine from the inside: traitors, curators and those who watch from the Kremlin
Ten "defeats" of Putin
Reporterin Yandex News
Read Reporterin Google News
8 comments
Information
Dear reader, to leave comments on the publication, you must sign in.