Africa for 20 billion dollars - a good deal for Russia!

October 24 2019
41
International economic The Russia-Africa forum, which is now taking place in Sochi, is without a doubt an event that has not only a global geopolitical scale, but also truly historical significance. But it just so happened that so far the highlight of the event has been the statement by Russian President Vladimir Putin about the $ 20 billion debt "forgiven" by Africa to African countries. The first indignant exclamations are already heard: “Well, what is this being done! We would forgive someone! We don’t have enough ... ”And so on and so forth. 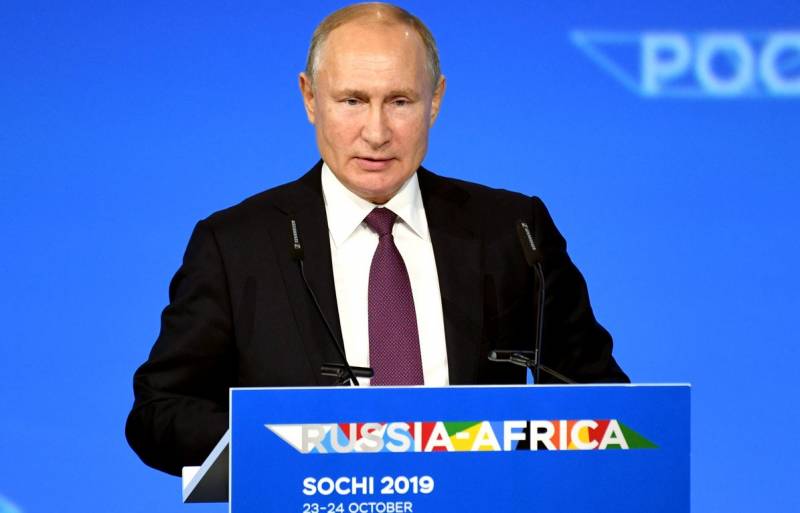 So, maybe, in fact, our country is making a mistake? What really happens: crazy “attraction of unprecedented generosity” or, after all, cardinal changes in the external policy Russia, thoughtful and wise, with the goal of leading it to new, unprecedented heights?

What are we losing?

It is not surprising that the first in the history of our country large-scale forum with the participation of senior representatives of the Black continent took place exactly after the stunning political victories of Russia in the Middle East. And, accordingly, after the crushing failure that the United States finally suffered in this region. The “unipolar world,” cherished by Washington, does not just burst at the seams. It collapses, spreads in front of our eyes, like a rotten gunny. What can our planet expect as a result? There are actually two options: either chaos, widespread "confusion and reeling", fraught with many local conflicts and wars, economic and political crises, or ... The establishment of some completely new world architecture, a system of relationships and "rules of the game." This is exactly what Russia is working on now. The most powerful summit, which opens a new page in promoting our interests in the geopolitical arena, is a logical and necessary continuation of the successes that preceded it. By showing the world that wars are now ending and being prevented not in the New York hall of the UN, but in the Moscow Kremlin, having strengthened its own positions in the Middle East, Russia is simply developing a successful offensive. Why Africa? Yes, if only because diamonds, uranium, gold, oil! And a population of a billion souls, that is, a potentially huge market.

I want to note: the Russians never came to Africa as colonialists or slave traders. Exclusively in order to teach, heal, build, help. Local conflicts of the times of the USSR? Military advisers? Yes, all this was. However, with what the representatives of the "civilized world" have been doing for centuries on the Black Continent, this does not come close to any comparison. We just helped the Africans to throw off the yoke put on them by “enlightened civilizers”, to break the shackles. Alas, no one has yet managed to rid the huge and richest continent in its natural wealth and potential from diseases, strife, poverty. All attempts made ostensibly in this direction by the “world community”, which, in fact, were an attempt at a new colonization, only with the use of credit bondage, eventually resulted in nothing. Africa is mired in new debts, but neither peace nor wealth has been added to it. And now Russia for the whole world declares its noble gesture - the liberation of the countries there from at least part of the credit burden hanging on their economies. However, we will be frank - in this case we are dealing not only with a beautiful gesture, but also with a very pragmatic act. The loans in question, for the most part, were issued by the Soviet Union, and they were taken by various "people's leaders", of which the vast majority have not even been remembered for a long time. In many African countries, power has since changed ten times, if not more. In fact, Vladimir Vladimirovich forgives “virtual” debts that are impossible to receive.

What do we get?

But it’s more than realistic to talk about the considerable profits and benefits that our country can get by sharply intensifying cooperation with African countries. Moreover, cooperation, conducted naturally from the perspective of a senior partner. An intergovernmental agreement already signed within the framework of the Rosatom forum with Ethiopia in the field of the peaceful uses of atomic energy, implying not only our country's leading participation in the creation of a “nuclear infrastructure” in the energy field, but also the founding of the Russian-Ethiopian Center for Nuclear Science and of technologies - here is the result. Similar plans for Namibia, the largest uranium producer in the world, whose president, Hage Gottfried Geingob, formally asked Vladimir Putin to send Russian military advisers to the country is another step in the same direction. Nuclear energy, so that they would not try to repeat the obsession with the “green” adherents of the Tunberg sect, is the future of mankind. Key positions in this industry should belong to Russia and only to it! And the main world source of fuel for nuclear power plants is Africa. Well, let alone the planned, according to our president, doubling of Russia's trade with African countries against the current $ 20 billion, we can’t talk about it. And doubling should be just the beginning. In this respect, we are now twice behind the United States in this aspect, and eight times behind China! The main point in this case is that Russia does not export raw materials and energy resources to the Black Continent. This is a powerful impetus to the development of our industry.

Weapons ... And where without him ?! And in this regard, Africa is a market that opens up fantastic prospects for our country. According to Dmitry Shugaev, who heads the Federal Service for Military-Technical Cooperation, already now supplies to it account for 30-40% of all domestic arms exports. These are billions of dollars, and not “virtual” ones, but quite real ones. Combat aircraft and helicopters, air defense and anti-tank defense equipment, small arms ... The head of Rosoboronexport, Alexander Mikheev, announces "African" contracts for $ 4 billion, which will be executed by Russian gunsmiths this year alone. The total volume of orders in this area, according to the statements of the same Shugaev, reaches $ 14 billion. But this is far from all. It is not enough to acquire modern military equipment - each such transaction entails the participation of our specialists in the adjustment and adaptation of purchased systems to local conditions, their maintenance and the inevitable subsequent modernization, staff training and much more. All together, this is called the inclusion of the country in the orbit of the Russian military-industrial complex. Such things are worth a lot, and not only in the literal sense. Today, Russia occupies an increasingly strong position as the “chief military adviser” and partner of Africa, and they need to be strengthened as much as possible, which, however, is being done. While the president of the Republic of South Africa is conducting social talks in Sochi with Vladimir Vladimirovich, the White Swans of the Russian Aerospace Forces are already landing on the airfield of this country. I wonder what will be the scale of the hysteria about the appearance of our strategic nuclear bombers in the country of the British Commonwealth?

The way of Russia: there is no other choice

Before conducting dubious conversations like: “Who would forgive us ...”, we need to ask only one question: in which country do we want to live? What country do we want to pass on to our children and grandchildren? What does it mean, “who would we be” ?! Forgive the poor, weak and miserable! Is Russia poor? Weak? Yes, no one “bounced” our debts to us, because they themselves paid off. You need to clearly understand - do we dream of being citizens of a state deciding the fate of the world, or are we ready to be satisfied with the relatively well-fed vegetation in the margins, paid for by the collapse of our future? Striving for greatness? To respect in the world, to ensure that no one dares to enter our borders with weapons, but does not dare to tell us how to live? So for this, do not blame me, you have to pay. Pay today, working for the future, building alliances and gaining strong and reliable ties, laying the foundation for future prosperity and security. No other way. Just one specific example: after China, pissed by sanctions, threatened to leave the United States without the rare earth metals needed in today's military industry, the Pentagon rushed to look for them ... What do you think, where? Yes, in Africa! Rushed to Malawi, to Burundi, somewhere else. Otherwise, a shish with oil instead of missile guidance systems, the most important missile defense components and satellites with combat lasers. Will we give the Americans the opportunity to create new weapons against us or will we turn things around so that they fly on brooms instead of fifth-generation fighters?

We should not forget about one more thing. Yes, now the United States is losing the status of a “world hegemon.” Most likely, their days in the halo of the "only superpower" on Earth are already numbered. However, who said that someone else would not want to take this position? The Chinese comrades, no doubt, the guys are much prettier than the star-striped “cowboys,” but what if they themselves begin to equip the world by their own understanding? Is Russia worthy of becoming the "younger brothers" of the Middle Kingdom? It is in order to prevent this from happening, that we are considered as equals (minimum), and today we need to carry out an active foreign policy expansion. The return to Africa, the geopolitical positions that we lost, like many other things, after the collapse of the USSR, are a successful move in this direction. Debts? And the dog is with them, with debts. The same China practices such a "write-off" regularly. After that, all over the world, either its military bases or enterprises with unprecedented preferences and privileges appear. Just that experience, which is even worth adopting. To strengthen its economic and geopolitical positions, Beijing is investing huge amounts of money in various countries. In 2018 alone, according to the UN, Chinese comrades invested $ 130 billion worldwide. Russia can not compete with them? Yes, you might think ... Just sometime you have to start. Not to moan over your own, supposedly “poverty” and “backwardness,” but to build your truly great future.

If, having written off $ 20 billion to Africa and investing much more in its economy, our country will move at least a few steps towards this future, but really, it will be worth it.
Ctrl Enter
Noticed oshЫbku Highlight text and press. Ctrl + Enter
We are
Ukraine from the inside: traitors, curators and those who watch from the Kremlin
Ten "defeats" of Putin
Reporterin Yandex News
Read Reporterin Google News
41 comment
Information
Dear reader, to leave comments on the publication, you must sign in.