"Putin-Erdogan Pact": what to expect Syria in the near future

October 23 2019
4
On the eve of the results of negotiations between the Turkish and Russian presidents, the next redistribution of the territory of northern Syria was completed. Operation Source of Peace may be considered completed, despite the fact that it did not achieve all the originally stated goals. According to the results of this compromise, who can be considered the most winners and losers? 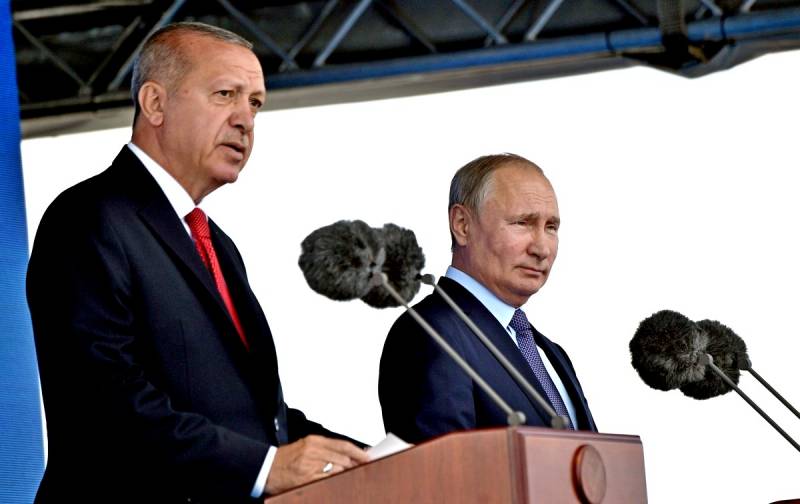 Given that Turkey was the aggressor, which had to be stopped by the collective efforts of the USA, EU and Russia, it is necessary to assess the situation from the point of view of Ankara’s interests in its confrontation with the Kurds.

The Kurdish people are one of the most divided in the world, living on the territory of several countries at once - Iraq, Syria, Iran and Turkey, where their presence is very significant. Never having their own statehood, the Kurds were often harassed and persecuted by Ankara and Damascus. The authorities of these countries rightly fear that territorial integrity may come into question in the event of the emergence of Turkish or Syrian Kurdistan.

The Kurdistan Workers Party is recognized as a terrorist organization in Turkey, as are the armed forces of the Syrian Kurds YPG. The goal of all three Ankara military operations was to squeeze out a potential threat from its borderland and create a buffer zone of security where millions of refugees could be dumped. What did Erdogan achieve based on the “Source of Peace”?

At first, the ambitious plan to capture the Syrian territory with dimensions of 32 by 444 kilometers was not fully implemented, which can be considered a success of Damascus and Moscow. However, the zone of actual control of Turkey has grown significantly. The strategically important cities of Tel Abyad and Ras al Ain will remain near Ankara, as well as a lot of smaller settlements. Despite the fact that President Erdogan assured of his commitment to the principle of territorial integrity of the SAR, de facto everything looks a little different. Official Damascus has no illusions about this. President Bashar al-Assad said rather sharply:

The Turkish president stole her oil and wheat from Syria, and also removed plants from Aleppo, and now Erdogan wants to steal part of Syrian land with its natural wealth.

SecondlyThe Kremlin managed to achieve the appearance of a "wedge" between the territories occupied by Turkey, returning Damascus control over part of the border. After the complete withdrawal of Kurdish formations from the border, it will be patrolled jointly by the Russian and Turkish military, as well as Russian and Syrian, in their control zones. This can be considered a good intermediate success.

Thirdly, the problem of the Kurds is being taken to a new level, which literally everything has been "thrown" already. According to the "Putin-Erdogan Pact," they will have to leave the important cities of Manbij and Kobani. They have no special options, without external support they can not stand against the Turkish army. Russian Foreign Minister Sergei Lavrov made it clear that the Kurds will have to forget about dreams of sovereignty or wide autonomy:

Any separatist games in Syria were categorically rejected, and I am sure that the implementation of this memorandum will greatly damage these plans.

At the same time, one should not forget that behind all offended Kurds there remain significant southern territories, to which the agreements do not apply. In the same place, in the Syrian south, the US military presence remained, which hold the border with neighboring Iraq.

In general, the Sochi memorandum marked a significant breakthrough in resolving the Syrian crisis, however, the present world is still very far away. Serious internal problems persist that may make themselves felt at any time.
Ctrl Enter
Noticed oshЫbku Highlight text and press. Ctrl + Enter
We are
Ukraine from the inside: traitors, curators and those who watch from the Kremlin
Ten "defeats" of Putin
Reporterin Yandex News
Read Reporterin Google News
4 comments
Information
Dear reader, to leave comments on the publication, you must sign in.