"Geopolitical poker": why the US lost to Russia

October 23 2019
23
What is our life? The game ... If we imagine the international relations of the last decades in the form of a card game, then perhaps the closest analogy will be poker. After all, it was invented and developed to the current level in the United States of America. But just this country for many years very unsuccessfully tried to make the whole world play exclusively in its games and according to its own rules. 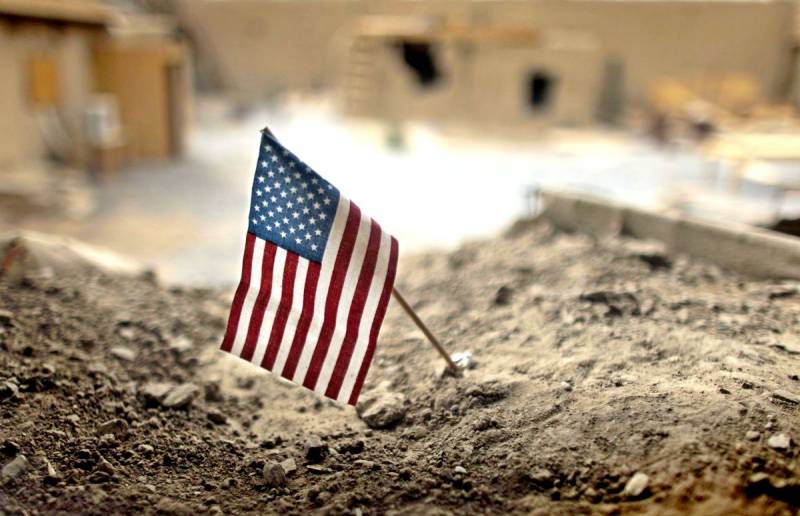 However, paradoxically, it was the violation of the fundamental and well-known principles that are mandatory for compliance at the poker table that led the United States to where it led. What specific errors are we talking about and how do they relate to Washington’s latest high-profile geopolitical fiasco?

I will make a reservation right away - I am not a poker expert or an inveterate player at all. Therefore, we will focus on well-known things that are understandable even to those who are familiar with the card theme for the most part from literature and cinema. And the first among these will, of course, be a bluff - a poker technique that went far beyond the boundaries of green cloth and, by the way, gave the name to the beautiful movie of the same name, in which it is considered as a model of behavior in literally all life situations. The ability to make your opponents believe that you have the strongest card on your hands that cannot be beaten, and force them to save, abandon the fight, having in fact quite weak positions, is not given to everyone. However, the Americans turned out to be not just masters in this matter, but virtuosos. It’s necessary to convince the whole world that their army is the most powerful, the weapons are more powerful than anyone else’s, economy and the financial system is developed and stable, like nowhere else, and Technology and scientific research overtook everyone for almost a century! And in addition, successfully maintain confidence in this all not only among their own allies, but also opponents. It is precisely the fact that all of the above statements over time turned, in fact, into axioms, and allowed the United States to successfully play the role of a “world hegemon”, in fact, dictating its own will to all of humanity.

However, back to the principles of poker. According to them, the abuse of bluffs will inevitably become a path not to victory, but to loss. Opponents in the game will simply stop being scared and will "figure out" the fact that they are led by the nose. As a result, instead of cards thrown onto the table, an overly bluffed player will receive a sharp increase in stakes in response. That is, exactly what Washington has run into. The United States began to scare Russia with a nuclear arms race: “We will terminate international treaties limiting the buildup of missile power!” And instead of surrendering, in return we created “Petrel”, “Poseidon” and other “surprises” for the Pentagon, and we also promised to embed them in “decision centers”. China in Washington decided to break the "trade war" and the imposition of sanctions. Beijing, without thinking of humbly raising its paws up, turned on retaliatory restrictive measures and set about successfully proving to the world that a healthy economy could well survive without cooperation with the United States. What Russia and China are there - bluffing does not work even against Turkey and Iran. The warlike statements that have been pouring out recently from Washington do not cause anything there except contemptuous ridicule. Pompeo can broadcast as much as he wants about “the president’s readiness for military action” against Ankara. After the hasty flight of the American army from Syria, they mockingly call it a "translator's mistake." And in Tehran, Trump’s statements about delivering a “blow that has never happened before” do not react at all. Bluffing no longer works.

Inability to understand the enemy

Incidentally, there is one more rule regarding bluffing. According to poker experts, it should never be used against three or more opponents. It is unlikely that they will all “penetrate” and save. The United States has recently managed to turn the whole world into its own opponents, without a small amount. They got into conflicts almost all over the globe and everywhere they are trying to force those against whom they are playing to give them the whole “bank” without a fight - commodity and energy markets, natural wealth, geopolitical primacy and so on. A sensible player would already pay attention to how those who sit at the same table wink intensely at each other and wink at each other. I would draw a conclusion from the growing rapprochement of at least Moscow and Beijing. He would analyze the alliances of countries that are being created and gaining momentum before the eyes, to which American dictatorship and domination are fed up. And I would think about possible prospects ... However, none of this was done in Washington. This stems from another, extremely serious omission, which poker experts call the inability to focus on other players, to understand their nature, style of play, intentions and opportunities. Anyone who is fixated only on himself, his beloved, and on his own cards, is doomed to lose. Accustomed to think in patterns and “realities” invented by them themselves, Americans today simply cannot understand why their actions cause an effect that is completely opposite to what was expected.

Why do not the Russians run in a crowd to overthrow Putin and, in general, all “authoritarian power”? Why are the Chinese stubbornly unwilling to abandon socialism and dissolve the Communist Party ?! This is wrong! No ... It is wrong to expect in all cases from others that behavior that is inherent in yourself. Masters of poker argue that for a real win you need to be able to instantly evaluate the situation that is currently at the table, adjust to it, and, most importantly, other players. Otherwise, the loss follows the loss and, as a result, the player is covered with tilt. In poker terminology, this is what they call extreme stress, an explosion of emotions, a nervous breakdown in which the loser, desperate to grab the tail of the implacable luck that eludes him, starts to make a mistake, make stupid things, "turn off the brains" and accept what is called, to rub through . What is not a description for the style of action that has been inherent in the United States in international affairs recently? Threats, economic and political blackmail, the imposition of new sanctions, restrictions and duties are already even against their own allies and economic partners ... By the way, the very same tilt, succumbing to which you can stay, literally, without pants, can lie in wait for the addicted player and with a long series of wins. Most likely, this is exactly what happened with American politicians. Accustomed to the fact that since the collapse of the USSR and the collapse of the socialist camp, everything in the world has happened exclusively in accordance with their plans, now they simply do not want and cannot accept the new reality. Writing everything off to a “bad card”, they refuse to admit: the fact is that partners are playing against them at a level not at all the same level as 20, 10, or even 5 years ago.

Poker, geopolitics, or, if you like, geopolitical poker require, first of all, the ability to build a long-term strategy, plan your actions and weigh your own opportunities and chances far ahead. In no case do not focus on breaking the bank right now, on one lap, and think over the development options for the “big game” as a whole, based on real prospects, clearly understanding when it is worth raising rates, and when it's better to stay away. The United States does not adhere to this principle either. Time after time they make huge bets, which are likely to be bits. There they drive a lot of money into LNG production, for some reason hoping to capture the European energy market at will, ignoring the fact that Russia has much stronger and more advantageous positions in it. Washington is adopting fabulous military budgets, not wanting to acknowledge its own backlog in the field of modern weapons and continuing to lay more and more super-expensive aircraft carriers that have already become "yesterday" and representing, in the opinion of our military, "beautiful floating targets." The American army, traditionally occupying the first line in various world ratings, in fact, turned into reality not the strongest on the planet, but simply the most expensive for its own state. At the same time, the United States intervenes in local conflicts over and over, trying to “establish democracy” in its own way, and then they don’t know how to get out of the “hot spots” without losing their faces. In Syria, it didn’t work out ...

The Americans are betting on notorious political losers, like the Venezuelan rogue Guaido, Georgian Saakashvili or outright freaks replacing each other in power in Ukraine. They enter into alliances from which nothing good comes of confusing their own foreign policy to a state of utter confusion, and then reap the benefits in the form of scandals and shameful defeats. Why are they doing this? Yes, because they simply do not believe that their bet will not play! They are completely devoid of the ability to objectively analyze their own mistakes and try to explain the next failure by an unsuccessful “alignment”, point blank not seeing that a series of small losses is already turning into a complete defeat. Over and over again, they continue to play the same combinations, make the same moves, not realizing that instead of a royal flush, they have already had in their hands one unsuccessful riffraff. But right now it is time to open the cards and break the bank this time, it certainly will not work. That is why the fate of entire countries and peoples is increasingly being decided not in Washington, but in Moscow, as happened on the eve of Syria. If this goes further, you can even fly out because of the world geopolitical “table”, at which the United States has long been known as an invincible “shark” and move to a corner where they play only a “stupid fool”. However, the main thing is that the “sovereign rulers of the world”, who have purged completely, should not be tempted to simply turn this table over by mixing cards ... Given the available arsenals of forces, of course, they will have enough.

Fortunately, life is still not a card game, and quite direct analogies are inappropriate here. However, continuing them, it is worth noting that the United States may well continue to “remain in the game” - just not trying to use the speckled deck in it and following the fair rules common to all.
Ctrl Enter
Noticed oshЫbku Highlight text and press. Ctrl + Enter
We are
Putin's departure: how to prevent the collapse of Russia's foreign policy
Ten "defeats" of Putin
Reporterin Yandex News
Read Reporterin Google News
23 comments
Information
Dear reader, to leave comments on the publication, you must sign in.