Erdogan the thief: Assad accused the Turkish president of seizing land and factories in Syria

October 22 2019
1
Speaking to the military not far from the contact line in the Al-Habit village of Idlib province, Syrian President Bashar al-Assad did not particularly select expressions, characterizing Turkish President Recep Tayyip Erdogan. 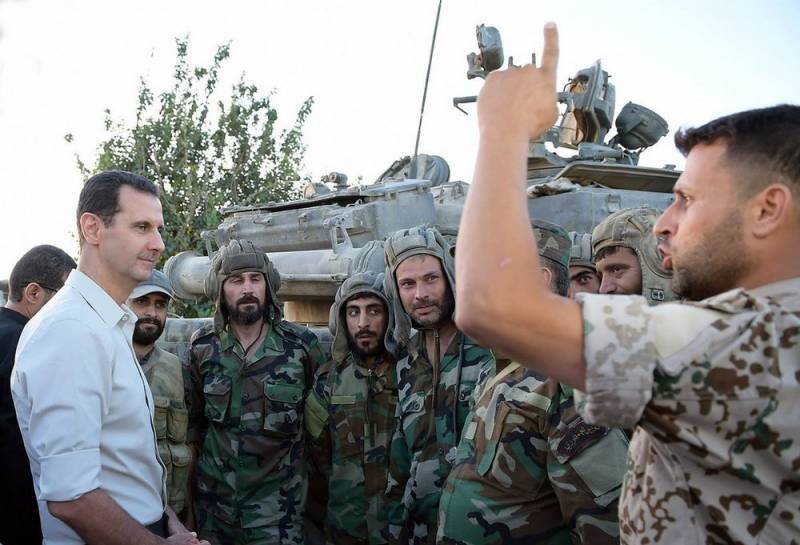 The Syrian leader called his Turkish counterpart a thief who stole plants, wheat and oil from Syria. and now steals the earth. This was reported by SANA.

He also noted that all lands are important for Syria, but at present the military situation is a priority.

According to Assad, Idlib was a springboard for the enemies of Syria, and victory in this province will become the basis for ending chaos and terrorism throughout the country.

It is difficult to say the words of the Syrian president. It is enough to recall that all ISIS * existed at the expense of Syrian oil, which was exported to Turkey by numerous automobile caravans, where it was willingly bought up by structures associated with Erdogan’s son.

Actually, Russia's military assistance began with the fact that the Russian air forces first destroyed these same oil columns, which immediately put the terrorists in a very difficult position.

Do not forget that for several years the north of Syria was plundered by Turkish-supported units of the armed Syrian opposition, which, in fact, were not much different from the terrorists of the Islamic state.

* -terrorist organization banned in Russia.
Ctrl Enter
Noticed oshЫbku Highlight text and press. Ctrl + Enter
We are
Erdogan: Russian aircraft can become an alternative to the F-35
In Crimea Zelensky answered the words about the return of the peninsula to Ukraine
Reporterin Yandex News
Read Reporterin Google News
Ad
The publication is looking for authors in the news and analytical departments. Requirements for applicants: literacy, responsibility, efficiency, inexhaustible creative energy, experience in copywriting or journalism, the ability to quickly analyze text and check facts, write concisely and interestingly on political and economic topics. The work is paid. Contact: [email protected]
1 comment
Information
Dear reader, to leave comments on the publication, you must to register.
I have an account? Sign in