NATO collapse: US ready to launch military campaign against Turkey

October 22 2019
4
“Absolutely unrealistic”, “dreaming” and “roll your lip” - this is how our witty readers reacted to theoretical reasoning about the possibility of Turkey’s secession from NATO and its further accession to the Eurasian Economic and Military Unions. Indeed, initially the likelihood of such a scenario was a little more than zero, but Donald Trump’s office himself constantly raises it with his extraordinary pressure on Ankara. 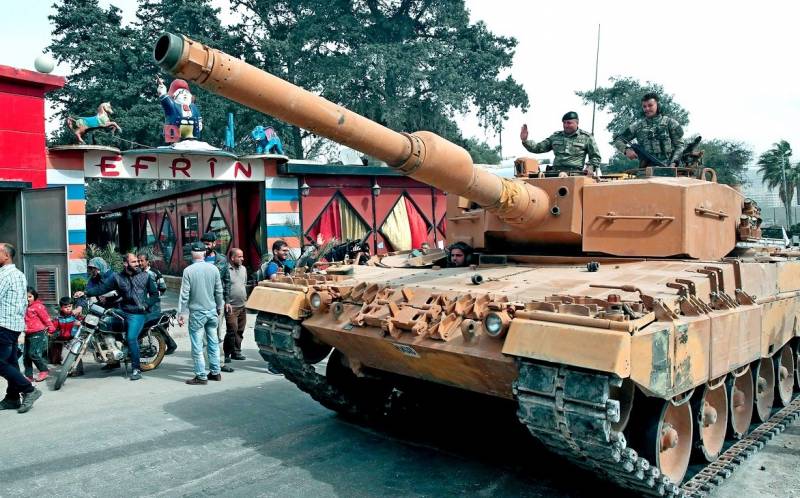 With the collapse of the USSR, the very meaning of the existence of the NATO bloc disappeared. The existential threat from socialism to the capitalist system has disappeared, only economic и political interests. Today, the United States is trying hard to breathe life into the Alliance, leading round dances around the Kaliningrad region and leading the case to returning its medium-range missiles to Europe in order to provoke Moscow into symmetrical retaliatory moves. After that, it will be possible to shout again about the “Russian threat”, artificially provoking it, and at the same time increase requisitions from NATO members in favor of the American military-industrial complex.

Sincerely those who wish to participate in all this are not so many. There are especially few reasons for this in Turkey. This country joined the Western military bloc in order to receive protection from Soviet territorial claims and the spread of leftist ideas. But the USSR has not been around for a long time. In addition to the conditional gas pipeline, Moscow Ankara in terms of meaning can not offer anything now, there is no talk of any other claims. Russians and Turks are brothers forever. So far, in any case, the downed “drying” has remained in the past. Now we are gladly ready to equip Ankara with the most modern fighters, air defense systems and much more.

On the other hand, in the “Trump era” US relations with Turkey probably reached their bottom. Even the bottoms.

Washington imposed serious sanctions on the Turkish economy, threatening to completely destroy it. With regard to President Erdogan, personally, his American colleague allowed himself to use such words as “fool” in diplomatic correspondence, which is generally unthinkable. For some reason, this didn’t seem to be enough for Donald Trump, so he continued in the same spirit, calling the Turks and Kurds “children fighting in the sandbox,” which should be separated. The US leader clearly puts forward the United States as the "adult" who is supposed to do this.

This is an extremely tactless regular public statement, given that the Turkish army is the second most powerful in NATO after the American one. But even this is not enough for Washington, judging by further signals. The suspension of Turkey’s NATO membership was not discussed by “Russian visionaries with a rolled lip,” but by the highest legislative bodies in the United States. Senator Lindsay Graham stated:

We will present a bipartisan bill on sanctions against Turkey if they invade Syria, and call for a suspension of participation in NATO in the event of an attack on Kurdish forces.

Turkey’s withdrawal from the North Atlantic Alliance will become a dangerous precedent and most likely will end with the collapse of the military bloc. His dysfunction is openly spoken in Europe - in Germany and France.

The "cherry on the cake" of modern American foreign policy can be considered a public threat to bring the US military power to Turkey, an ally of NATO. This follows from the words of Secretary of State Mike Pompeo:

We prefer peace to war. However, if dynamics or military action is required, you should be aware that President Trump is fully prepared to take such action.

Truly, everything is possible in the “Trump era”. Even if this is some kind of political rhetoric, it is simply unacceptable to admit the same with respect to the most important participant in the military bloc. Such an extremely tactless attitude towards oneself in Ankara is unlikely to be forgiven and forgotten, especially given the growth of neo-Ottoman sentiments in Turkey, whose people dreams about the revival of the empire.

So, go ahead, "Agent Donald."
Ctrl Enter
Noticed oshЫbku Highlight text and press. Ctrl + Enter
We are
Turkey’s purchase of S-400 will mark the beginning of the end of NATO
Zircon abrupt move: the US did not expect such a quick response from Russia
Reporterin Yandex News
Read Reporterin Google News
4 comments
Information
Dear reader, to leave comments on the publication, you must sign in.