October 23 2019
9
Following the Baltic states, Ukraine intends to disconnect from a single energy system with the Russian Federation. Earlier, the “three sisters” had already got rid of the heavy legacy of the “Soviet occupation” in the form of developed industry and agriculture. Now Kiev is following exactly the same path. What does this thoughtless politicking cost ordinary Ukrainians? 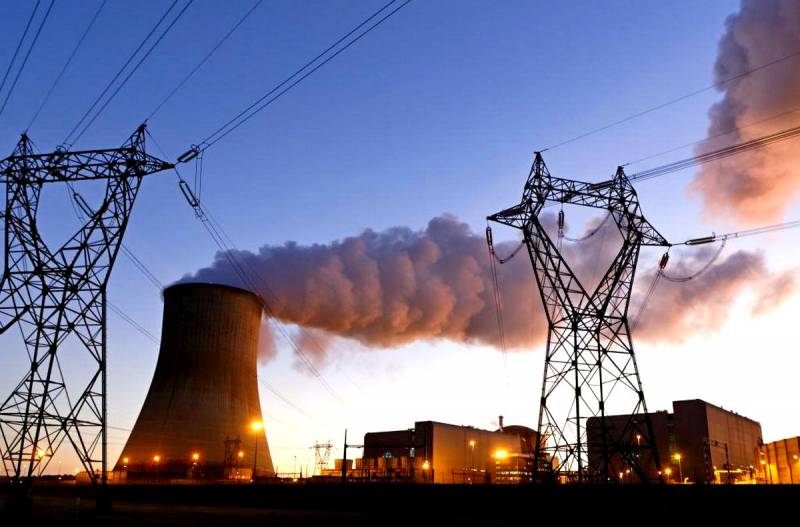 During the Soviet era, the “Russian occupiers” built in Ukraine a lot of advanced high-tech enterprises, creating numerous jobs for yesterday's farmers. In order for all this to work, the Soviets have opened a number of powerful thermal power plants, hydroelectric power stations and nuclear power plants in the territory of the current Independent Square. After the collapse of the Union in 1991, it was Kiev that had the greatest potential to become one of the leading powers. But it turned out differently.

Nuclear plants inherited by Ukraine are gradually developing their resources. The construction of new power units requires multibillion investments, which Kiev cannot afford now. After Fukushima, European officials are unlikely to support the preservation and development of Ukrainian nuclear power plants. There is no money for the construction of new thermal power plants. Gas prices, bought with a margin in Europe, are rising, and with them the cost of electricity for consumers.

It’s extremely interesting to see how neighboring countries profit from Ukraine’s problems. As you know, the Ukrainian energy system is historically synchronized with the Russian and Belarusian ones. However, already in the nineties, Kiev began experiments with the so-called "energy islands". On the territory of Western Ukraine, the Burshtyn energy island was created, synchronized in 2002 with the European system. Cheap Ukrainian electricity went to Hungary, Poland, Slovakia and Moldova, where prices are higher due to environmental regulations.

In addition, Warsaw laid eyes on the Khmelnitsky NPP. Already under Zelensky, a decree was signed on the transfer of the second power unit of this nuclear power plant to the Polish energy system. The neighboring state, whose energy is mainly based on the use of coal, is profitable due to the reduction of harmful emissions and the cost of kilowatts. But is it profitable for this very Ukraine?

This experiment was presented to the public as “integration with Europe,” and the money raised for selling energy to Poland should go to modernize the Ukrainian energy sector and prevent the increase in tariffs for the population. But the practice was slightly different. The public-private partnership around the Khmelnitsky NPP was arranged in such a way that, according to “evil languages”, the main money was deposited in private pockets of a narrow circle of people. At the same time, it only aggravated the problems in the energy sector of Independence, said the representative of the President Andrei Gerus:

Today, our price has already skyrocketed, today there are already shortages of electricity - on the day-ahead market such deficits are 5-30%. Ukraine is increasingly importing energy from Slovakia and Belarus. The withdrawal of the block will only increase the deficit in the domestic market and cause an additional price increase for Ukrainian consumers.

The negative outlook was fully justified. The transfer of the Khmelnitsky NPP block in favor of the Polish system led to a shortage of electricity in Ukraine itself. It got to the point that Kiev was forced from October 1 to allow the purchase of energy from the "aggressor". Russian electrons, albeit "hostile", but turned out to be attractively cheap for consumers. Domestic exporters prudently work on a prepaid basis.

It would seem that reason prevailed, but no. At the expense of Russia, they are only plugging holes in their energy balance. The representative of the Ministry of Energy of Ukraine Vasily Shubin said:

Our goal is to fully integrate with the European energy system.

For Ukrainian consumers, synchronization with the energy system and the EU market will mean, according to many experts, a further increase in tariffs, which can increase by several times. But there is no doubt that a narrow circle of people in Kiev will find ways to turn the problems of the population into profit.
Ctrl Enter
Noticed oshЫbku Highlight text and press. Ctrl + Enter
We are
Peace enforcement operation. Russia inflicts a preemptive strike on Kiev
Largest hydroelectric power station: Russia averted war on its borders
Reporterin Yandex News
Read Reporterin Google News
9 comments
Information
Dear reader, to leave comments on the publication, you must sign in.