Garlock wakes up: California may be suddenly wiped off the face of the earth

October 24 2019
5
Thanks to Hollywood, the geological fault of San Andreas has become famous throughout the world. Some time ago, in the United States, a disaster film of the same name was shot, describing in the darkest colors the consequences of a super-earthquake caused by the activity of this natural phenomenon. Now, Garlock’s second geological fault will be heard, which unexpectedly woke up in prosperous sunny California after five centuries of sleep. 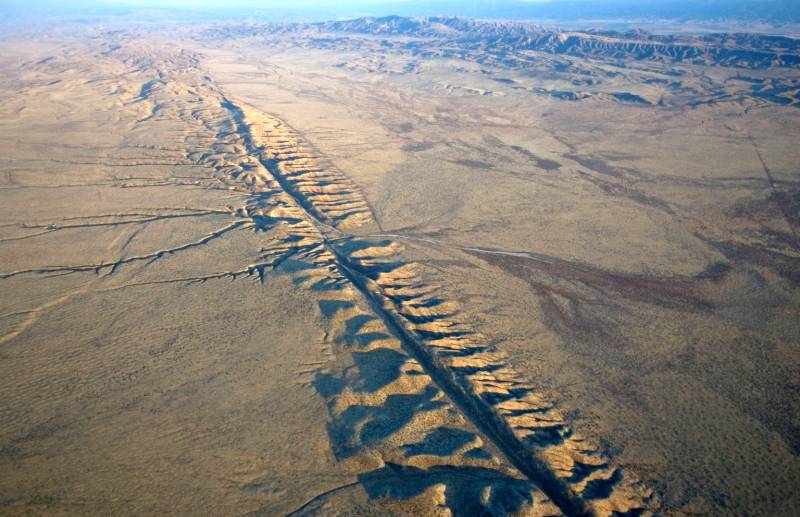 Faults or gaps are a phenomenon of violation of the integrity of rocks, which appeared as a result of the movement of tectonic plates. Sometimes their sides can move relative to each other. When energy is released along active faults, strong earthquakes occur. Therefore, it is better when they "sleep".

If we turn to the already mentioned San Andreas Fault, then it has already provoked powerful earthquakes up to 9 points in magnitude. The most famous occurred in California in 1906 and in 1989. The earthquake of 1906 claimed the lives of more than 3 thousand people, more than 80% of all buildings were destroyed in the city of San Francisco. Shocks were felt from Oregon to Nevada. In addition to the earthquake itself, huge damage was caused by subsequent multi-day fires.

The consequences of the Loma Prieta earthquake

Another collision of the Pacific and North American tectonic plates led to the Loma Priet earthquake on October 17, 1989. Killed 62 people, more than three thousand were injured. Dozens of bridges and more than 18 thousand buildings were destroyed. The damage was estimated at almost 6 billion "those" dollars. 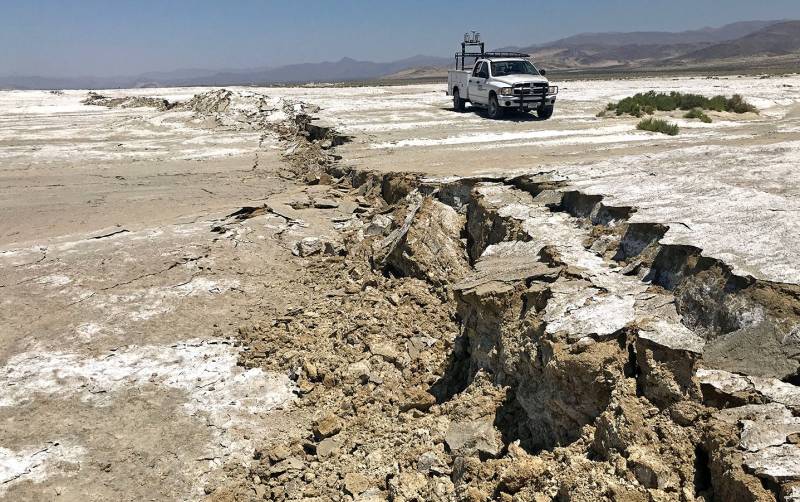 These examples show that with geological faults, jokes are bad. Therefore, the awakening after Garlock’s centuries-old sleep caused serious concern in the United States, given that he crosses San Andreas. The sides of the gap shifted relative to each other by 2 centimeters, which is a lot. American researchers write:

This is surprising since we have never seen Garlock fault activity. But he suddenly changed his behavior. We do not know what this means.

Their concern and caution of statements can be understood. California is one of the richest states with developed agriculture, oil refining and the world famous Silicon Valley, not to mention tourism and cinema. In addition, this region of the United States is very saturated with Pentagon military bases. A large-scale earthquake can cause enormous damage.

Garlock’s awakening was facilitated by the so-called “Ridgecrest Swarm of Earthquakes”, a town near Los Angeles last summer. It turned out that the activity there are two dozen small geological faults, which were previously not known. The situation in California is becoming more and more precarious in every sense of the word.
Ctrl Enter
Noticed oshЫbku Highlight text and press. Ctrl + Enter
We are
“About to collapse”: TOP-10 of the most ridiculous prophecies about the Crimean bridge
Where is Russia going?
Reporterin Yandex News
Read Reporterin Google News
Ad
We are open to cooperation with authors in the news and analytical departments. A prerequisite is the ability to quickly analyze the text and check the facts, to write concisely and interestingly on political and economic topics. We offer flexible working hours and regular payments. Please send your responses with examples of work to [email protected]
5 comments
Information
Dear reader, to leave comments on the publication, you must sign in.