Put out Yellowstone: in the United States found a way to avoid disaster

October 22 2019
7
The American supervolcano Yellowstone has long been a part of global public awareness. Someone “prays” to him as a chance to once and for all put an end to US hegemony in a natural way. Others consider a dangerous natural phenomenon as a source of "hype" and the development of multi-billion dollar budgets. But what if the problem of a supervolcano could be solved once and for all? 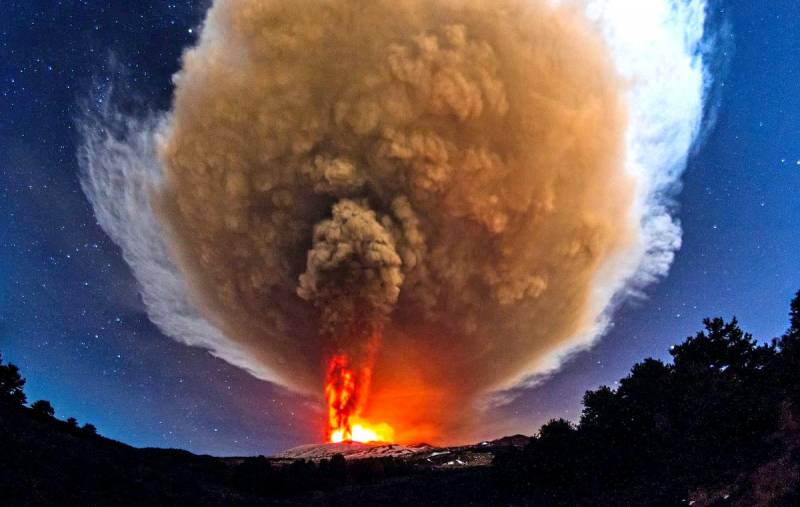 Caldera Yellowstone, whose size is 55 by 72 kilometers, is located approximately in the middle of the United States and is very similar in essence to a time bomb. More precisely, there are even two of them. The first magma chamber with a length of 90 and a width of 40 kilometers is located almost below the surface of the earth. And it increasingly makes itself felt by constant earthquakes, and the forest in the vicinity is literally charred by the heat coming from below.

The second natural bomb is planted lower, and it is 4,5 times larger than the first. Experts say that eruptions have already occurred three times, with a frequency of 600-700 thousand years. And just now 640 thousand years have passed since the last, that is, in theory, it is time. About what this natural disaster will look like, was described in his book by Brian Walsh, who is studying the supervolcano:

The pressure will increase until, like champagne in a bottle with vigorous shaking, magma breaks through the earth in a titanic eruption that will throw the toxic interiors of the Earth into the air. The eruption will last several days, plunging everything around 60 km into the lava.

But this is where our troubles will only begin. Hot ashes and volcanic gases rise to a height of tens of kilometers, spread over the territory of the United States and other countries. This ashes will cause great harm, destroying the crop and making the land barren for many decades. It will also disrupt energy and water supply. Once in the atmosphere, the particles of ash will create the effect of a long-term “nuclear winter” with all the ensuing consequences in the form of mass starvation and armed clashes due to control over resources.

It will go to everyone, not just the United States. According to the most pessimistic estimates, by the time the unnaturally long winter ends, only every thousandth inhabitant of the Earth will survive. Otherwise, such a scenario cannot be called a global catastrophe. However, it is believed that researchers deliberately exaggerate in order to attract public attention and disrupt funding from state funds. Say, a volcano erupts a couple of times and again falls asleep for a long time, turning away.

I wonder how scientists propose to solve the problem of Yellowstone in the bud. American geologists believe that a supervolcano can be extinguished in advance of its eruption. To do this, you will need to drill wells of 10 km depth and pump water under pressure into magma. This option is estimated at some 3,46 billion dollars. It should be noted that a similar idea was met in the scientific community very ambiguously. Experts point out that in this way you can only accelerate the explosion. For example, the famous Icelandic volcano Eyyafyadlayokyudl woke up in 2010 just because of melt water falling into magma.

Curiously, America itself can come to the rescue. Real Clear Science recently published an article claiming that Yellowstone can be rendered harmless in a natural way due to the ongoing displacement of tectonic plates. When faced with cold rocks, hot magma must ultimately waste its deadly potential. Like it or not, time will tell. But tectonic activity, even if it solves the problem of a supervolcano once and for all, will give rise to new ones associated with the activation of faults, which leads to super-earthquakes.
Ctrl Enter
Noticed oshЫbku Highlight text and press. Ctrl + Enter
We are
Yellowstone Volcano Destroys Half America
Where is Russia going?
Reporterin Yandex News
Read Reporterin Google News
7 comments
Information
Dear reader, to leave comments on the publication, you must sign in.