Boeing slaughtered: the fall of the aircraft giant continues

October 21 2019
3
Yes, the name of one of the largest aircraft manufacturers is increasingly associated precisely with the word “fall”. And nothing can be done about it yet. Fortunately, in this case, we are not talking about another disaster for the liners of this brand, but only about a new reduction in stock quotes for corporation shares. Alas, the reasons that caused their last collapse are too serious to be dismissed from, attributed to “temporary difficulties”. 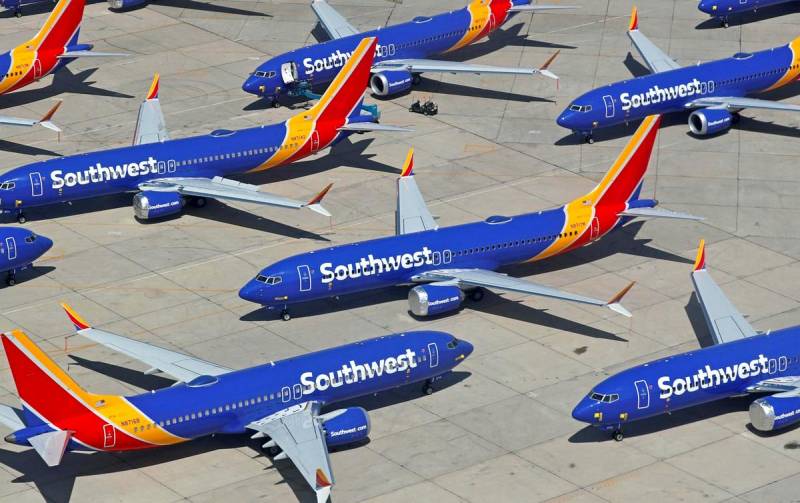 “Cracks,” one after the other, are not due to the wings or landing gear of the Boeing aircraft, but to its business reputation. For a company on whose good faith the lives of millions of people around the world depend on every day, this really can be a death sentence.

The new “steep peak” of Boeing securities, during which the shares of the corporation on the New York Stock Exchange “collapsed” at the same time by 4.25% to the price of 353 and a half dollars per unit, was caused by a revelatory statement made by representatives of the Federal Aviation Administration (FAA ) According to this, the company was not only well aware of the problems with the 737 MAX software, which subsequently cost hundreds of people, but even had documentary evidence of such! We are talking about correspondence that was conducted between Boeing employees back in 2016. So, the main technical 737 MAX pilot Mark Forkner complained to his colleagues that he had “monstrous problems” while managing the airliner, and the MCAS system, which caused two disasters, “gets out of control” and generally “has serious flaws”.

At an altitude of 4000 feet at a speed of 230 knots, the plane leveled just like crazy!
- This is a literal quote from the correspondence.

Yes, it was about testing control on a flight simulator, and Boeing is now trying to argue that the pilot supposedly made a mistake that he, and not the 737 MAX system, was faulty. Nevertheless, Forkner was well aware of the essence of the problem. He writes that, after testing after saying that everything was OK with the liner, "he actually lied to regulators, albeit inadvertently."

The most unpleasant thing is that the representatives of the corporation provided this correspondence to the Committee of the House of Representatives of the US Congress on Transport, whose members are investigating the causes of the crash in Ethiopia and Indonesia, just now! It was this kind of “slowness” that caused a real explosion of indignation in the FAA. Its administrator, Stephen Dixon, in writing demanded an explanation from the head of Boeing both regarding the content of the document itself and, first of all, regarding the reasons why it was not brought to the regulator immediately after discovery. The Federal Agency expressed “bewilderment and disappointment” with the actions of the corporation and honestly admitted that they did not even know how to react to what had happened ... There was no doubt that the reaction would follow and be very, very negative. Official Washington simply has no choice but to make Boeing a real scapegoat for everything that happened. (Moreover, there are more than sufficient reasons for this!) Otherwise, the United States of America, as a state, will already bear responsibility. At least with respect to one of the two plane crashes with 737 MAX, everything is already there.

The following month, the results of an investigation in Indonesia should be made public. So far, officials involved in this case have refrained from commenting, but the press (including the American one) has already leaked data according to which charges can be brought not only against Boeing Corporation itself, but also against those “who did not provide proper security control US government operations. ” Moreover, claims can be made against the aircraft manufacturer not only for “critical flaws in the aircraft structure” and their concealment, but also for “improper aircraft maintenance” and “poor training of pilots who made a number of mistakes.” In a word, the Indonesians intend to ask the guilty, as they say, throughout the program. I must say that Boeing has long been ready for this, at least in the material aspect. There has already been created an appropriate compensation fund in the amount of $ 50 million, from which each family, whose members died in a plane crash in Indonesia and Ethiopia, will receive about $ 145 thousand. Moreover, lawyer Ken Feinberg, the manager of this fund, said that victims will not even be required to refuse to file further lawsuits against the corporation upon receipt of payments. Also in Boeing plan to support those regions of both countries where the crash occurred, allocating about the same amount.

You need to understand what all this corporation does is not altruism at all, and certainly not from a good life. In the second quarter of this year, Boeing suffered the largest loss in the history of the company - 3 billion dollars almost. A 35% decrease in quarterly revenue over this period amounted to $ 15,7 billion. According to experts, the corporation can only dream of a traditional "palm" in the supply of passenger aircraft this year. Most likely, leadership will pass to its eternal rival - Airbus. It should be noted that a hole of 5,6 billion dollars in revenue and 8.7 billion in profit (per quarter) was made by just the compensation paid by aircraft manufacturers for the 737 MAX that turned out to be around the world. However, this is far from all the problems of the corporation. We should not forget about more than four hundred lawsuits against her filed by the pilots of this model of airliners. All of them blame Boeing for the same thing - "the deliberate concealment of critical structural defects", which led to the deaths of people, and could well have cost literally each of them. There is every reason to believe that the chances of winning trials on this issue will not be on the side of the aircraft manufacturer. And this means inevitable new losses - both financial and reputational.

Meanwhile, the corporation continues to build truly "Napoleonic" plans to regain lost ground. So, Boeing’s analysts, this year, swept their faces in calculating the prospects and opportunities that their employers promised for the rapid development of China’s passenger air transportation market. According to the calculations obtained as a result, if China now accounts for 15% of the world's civilian air fleet, then by 2038 this figure will increase to 18%. Thus, China will leave behind the United States in this matter. Accordingly, as calculated by the corporation, in the next 20 years, Chinese comrades will inevitably need about 7,7 thousand new aircraft, for which they should fork out $ 1,2 trillion! Yes, in addition to spend 1,6 trillion dollars on their commercial services. The company bothered to take into account absolutely all the nuances. So, narrow-body machines in Beijing plan to sell about 6 thousand, and wide-body - about 1,8 thousand. Which, incidentally, will mean a tripling of the Chinese fleet of such aircraft. This all sounds, of course, extremely tempting, only who said that all these purchases will be carried out precisely by Boeing ?! On the one hand, the "trade war" between Washington and Beijing is absolutely not moving towards completion. On the contrary, the “battles” on its front, which flare up periodically, are more and more fierce from time to time. It is unlikely that the Chinese will rush headlong to support the economy own opponent voiced above breathtaking amounts. On the other hand, the big point is raised by the main point - the reliability of the company's liners. It is highly doubtful that in China they would glance at this problem, neglecting the safety of their own citizens.

The corporation, it seems, continues to pursue some kind of evil rock. In particular, this applies to the same "ill-fated" 737 model. Despite the fact that Eric Lindblad, vice president of Boeing, who worked there for 34 years and was responsible for the production of the fateful 2018 MAX since August 737, this summer resigned from his post, this helped little. So, recently, wing support defects were detected in 5% of the tested almost seven hundred liners of the 737 Next Generation model. According to experts, the problem is more than serious - the destruction of a part called the “cucumber fork” (namely, treacherous cracks were found in it) can lead not only to pilots losing control of the aircraft, but also to the fact that it’s just fall apart in the air. Naturally, the corporation conducts inspections of all airplanes of this model in a fire order, promising "to make the necessary replacements and repairs" as soon as possible. And at the same time, he is preparing for problems with airlines, which urgently have to remove these 737s from the lines ... Moreover, problems with MAX, which, against the promise promised earlier, will receive chances of returning to the sky no earlier than next year, have affected the timing adoption of another promising Boeing model - 777X. But it was precisely on her that the corporation had great hopes in the struggle for the ultra-long-distance transportation market! The first 350-seat 777-8 Australian airline Qantas Airways hoped to get it already in 2022, and by 2023 it even promised to launch a London-Sydney flight with an unprecedented duration of 21 hours.

Alas, when the aircraft of this series will fly into the air, it is now difficult to say. The representative of the corporation Paul Bergman has already made a statement that Boeing is “forced to revise the development plans for this series” and “change the schedule” for its development and release. It is clear that not in the direction of acceleration. True, the record-breaking non-stop commercial air flight the other day (16 thousand 309 kilometers in 19 hours and a quarter) along the New York-Sydney route was nevertheless made on a Boeing machine. This path was done by 787-9 Dreamliner. However, there were only 40 passengers and ten pilots on board. Obviously not the volume of traffic that was expected in Australia, dreaming of the brand new 777X. Well, what records Boeing will be able to set in the future - by flight range or by the scale of losses, time will tell.
Reporterin Yandex News
Reporterin Yandex Zen
3 comments
Information
Dear reader, to leave comments on the publication, you must sign in.