October 18 2019
17
Bad games in the “coercion” of our country to something there crawled sideways, first of all German the economy, which is today, sadly (for the inhabitants of this country), in a far from blooming state. 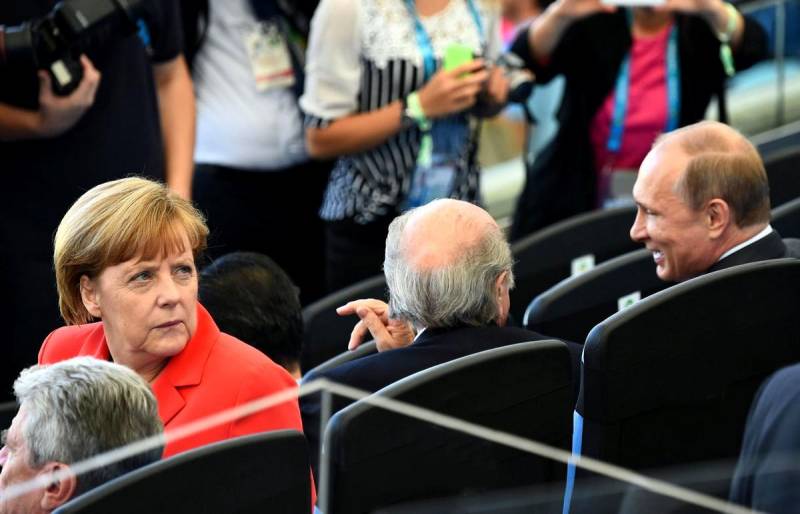 Verily, the state aspiring to leadership in the European Union was likened to that non-commissioned officer widow from the immortal play of Gogol, who, according to Gorodnichy, committed public flogging herself. What exactly did Berlin attempt to influence Russia with the help of pressure and restriction, and how could it end for the German side?

As they entered, they had fun, counted, they burst into tears ...

What the Germans definitely cannot refuse is the ability to count. Reducing balances, comparing the pros and cons of them always turned out very cool. Well, almost always ... Recently, the best representatives of the “gloomy Teutonic genius”, such an impression, almost without exception attended to mathematical exercises on the topic: “What do the sanctions against Russia cost us?” The question is really where as relevant. For example, the German publication Handelsblatt recently introduced its readers to the entertaining expositions of two well-known scientists at once, Matthieu Croze from Hong Kong University of Lynnan and Julian Hinz representing the Kiel Institute of World Economy. According to their studies, the restrictions imposed by various states and the counter-sanction measures taken by our country, in general, cost all parties to this “trade war" a whopping $ 4 billion a month! At the same time, as the experts report with some bewilderment, it somehow happened that these losses fall approximately equally on both sides. 55% of losses are suffered by the Russian economy, but 45% are just the countries that unleashed the sanctions company. So who is “punishing” whom ?! It’s not entirely clear ... However, this is only half the trouble. In fact, 92% of the damage that the “educators” of our country suffer is precisely due to the states of the European Union.

At the same time, of all the numerous representatives of the Old World, the most painful restrictions hit precisely in Germany. It accounts for almost 40% of real losses. In absolute terms, this looks like almost $ 670 million a month, which the German economy receives less. At the same time, the "pedagogical effect" of all this action, as the pundits have to admit, is practically zero. According to their calculations, as a result of the "war of sanctions" imposed on us by the West, "the consumer basket of Russians has risen in price by 0.2%." A stunning result! There was something to break spears for ... At the same time, as noted by all the same Hinz and Crozier, "Russia is less and less dependent on imported products, successfully developing its agriculture." Incidentally, this is precisely what a number of influential regional politicians Germany - for example, Manuela Schwesig, Prime Minister of the federal state of Mecklenburg-Vorpommern and her colleague Michael Kretschmer, who at that time headed the government of the federal state of Saxony. Both of them believe that if the sanctions hit anyone really, it was the German agricultural and industrial producers who lost access to the colossal Russian market. Most of all, politicians are worried that China is more and more confident in the "vacant seat"; both of them in their speeches expressed confidence that the early lifting of sanctions meets, first of all, the national interests of Germany itself.

A ghost wanders through Europe ...

And, indeed, he wanders ... But not at all communism, as the bearded founders of the “most advanced doctrine” once claimed, but economic decline and recession. And today he is knocking at the door of Germany. According to local media, the danger of the crisis threatens the country with a huge degree of probability. So, according to the German Institute for Macroeconomics (IMK), announced by one of the most respected German publications, Die Welt, the chances of the country “slipping” into a recession, which it had not known for the last six years, are estimated at 43%. And this is by no means speculative conclusions - according to the results of the 2nd quarter of this year, the German economy showed a decline of 0.1%. It seems to be not so much, but it should be borne in mind that the economic indicators of the European Union as a whole for the same period show growth. Suppose it’s a fraction of a percent, but GDP “goes uphill” in France, the Netherlands, even in Spain. Is Germany, instead of the role of the "economic locomotive" of the EU, the miserable fate of an "outsider"? Today, many local analysts are asking this question and come to very disappointing conclusions. A 2% decline in industrial production is alarming. But here the drop in German exports by as much as 8% is completely out of the ordinary ... Of course, the British also play their negative role here, having completely exhausted the nerves of Europe with their Brexit, and the trade squabble between the USA and China. However, judicious and knowledgeable people in Germany are well aware that the key to solving their problems must be sought in the East.

Like it or not, but among all the EU countries, Moscow’s trade partner No. 1 is precisely Berlin. According to Eurostat, last year, German exports to our country amounted to 26 billion euros, and the Germans, respectively, imported 33 billion euros of Russian goods. Such a trade deficit, of course, does not please the German side. Especially when you consider that before the imposition of sanctions, the balance of Russian-European trade was leaning towards the EU. According to experts there, it will be extremely difficult for Germany to “counteract the external economic shock,” relying solely on the fairly sagging domestic market recently. They fear that without sufficient opportunities to sell manufactured goods, German industry risks "drowning" and starting a global recession that will affect the whole country. But there are huge opportunities for increasing sales - these are, only, one might say, lend a hand! But sanctions, sanctions, even if they were three times wrong ... Not without reason, Michael Harms, executive director of the Eastern Committee of the German Economy, recently made an extremely harsh statement on this subject. In his opinion, not only Germany, but the entire European Union as a whole today faces a choice: "to restore strong ties with Russia or to be crushed into powder, having landed between the USA and China."

Incidentally, it was the organization named above that was the organizer of the parliamentary forum I mentioned at the very beginning, which was held last month and devoted exclusively to the issues of resuming economic relations with our country. Specifically, the speedy rejection of all and all kinds of anti-Russian sanctions. The Germans, apparently, the current situation is completely "tired". The same Herr Harms allows himself absolutely seditious statements, such as statements about the fundamental futility of any restrictions against Russia, since they, in his opinion, "only make Russian society rally even closer around Vladimir Putin." However, he only expresses the general mood of German entrepreneurs. A survey conducted this summer by the German-Russian Chamber of Commerce (AHK) among representatives of about one and a half hundred local firms showed very clearly that the vast majority are dissatisfied with sanctions. Not only that - almost 90% of the respondents began to directly blame Angela Merkel for the fact that she ... takes an insufficient personal part in normalizing and strengthening trade relations between the countries! Like, Frau Chancellor could well have found time to “attend major industry events” of Russian industry and business. The crown, you see, would not have fallen, but they could have got hold of the necessary contracts before the cut! And, as many believe, it’s possible to stay up too long - the Chinese people won’t impose any sanctions, so the Russians began to “have a lot more trust in them than in German companies.”

Such sentiments quite predictably push German politicians to definite proposals. Reflecting in the walls of the Bundestag on the topic of “breaking the blockade,” many of them spoke out very radically. So, Klaus Ernst, who represents the Party of the Left and is the head of the parliamentary committee on economics and energy, not only came up with the idea that Germany should initiate the lifting of anti-Russian restrictions at the European Union level, but even offered a reason for such a decision. There, the Americans, it seems, are our goods collected with duties to be collected? So in response to them we will not only set our tariffs, but also refuse sanctions against Moscow! So that they would know ... His position was supported by a parliamentarian from the Christian Social Union, the head of the committee for economic cooperation and development Peter Ramsauer, as well as Bernd Westphal, a deputy from the Social Democratic Party of Germany. The latter does believe that “after five years of unnecessary sanctions” the first step “for rapprochement with Russia” must be taken by the German side. Well, that sounds more than reasonable. To pay nearly 700 million dollars a month is not just incomprehensible for what, but, in fact, fulfilling the will of the United States, who are about to start a “trade war" already against the European Union itself? Somehow it does not fit with the well-established ideas about the vaunted German logic and practicality.

Well, one can only hope that by “checking with algebra” the ridiculously spoiled harmony of economic relations between our countries, Germany will move from very laudable political statements to concrete steps, without putting off this good deed, as they say, in a long box.