The end of Minsk: Zelensky launched an offensive on the DPR and LPR

October 17 2019
22
The regular meeting of the Tripartite Contact Group held yesterday in Minsk may well be the last. Not only was it impossible to agree on anything during the course of it, the representatives of Ukraine eventually announced an extensive list of their own requirements, each of which, in principle, crosses out the spirit and the letter “Minsk”. And already considered in the complex, they make it absolutely clear that they are not striving completely for any steps towards the peaceful resolution of the civil war in the East in the "non-winter". Moreover, they intend to continue to act there not according to the "Steinmeier formula", but exclusively on the principle of "the worse, the better." 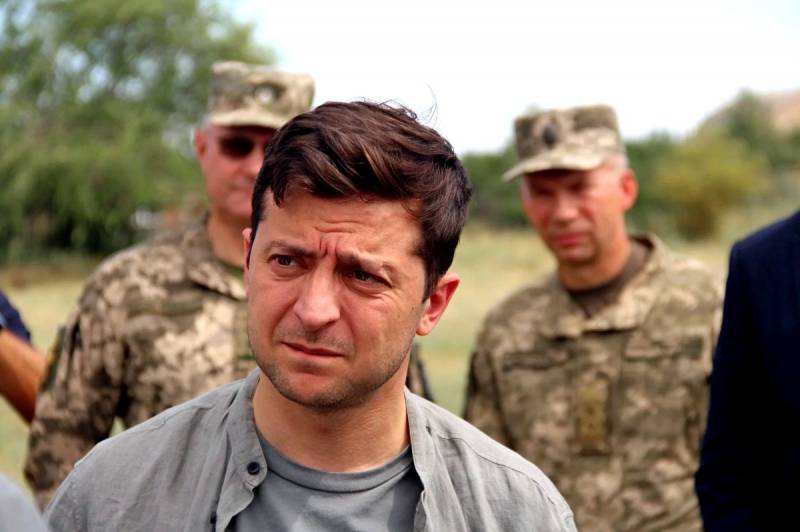 In fact, the meeting of the TGC was reduced to nothing more than to “the expression by all parties of their commitment to implement the decision to withdraw the opposing forces.” In any case, so said the OSCE Special Representative Martin Saydik who was present there. Nevertheless, no specific timelines for the start of this process, such as announced earlier on October 7, when the breeding was foiled by the Ukrainian side, are not even discussed today. Yesterday, expressing its full agreement with the settlement plans outlined earlier and literally signing under the “Steinmayer formula”, which was the first key to it, Kiev “changed its shoes in the air” and made a turn exactly 180 degrees. This impression is created by the ex-president Leonid Kuchma Darka Olefir, voiced by the press secretary representing the Ukraine in Minsk, with unprecedentedly demanding demands, numbering as many as eight, which, she said, are the conditions for starting the movement towards the peace process. In fact, this is a scenario, not only not different from the absurd “Wishlist” of the time of Poroshenko’s presidency, but in some ways even re-spitting them in their absurdity and impracticability. If a number of conditions, such as “the withdrawal of forces and assets along the entire line of contact”, “the complete demilitarization of Kalmius, Novoazovsk, Sakhanka, Kumachovo” settlements or “the provision of the work of the OSCE special monitoring mission throughout the Donbass territory”, could theoretically become subject to discussion, the rest are nothing more than “torpedoing” of the entire negotiation process, since they are impossible a priori.

To kill, but first - to rob

No less challenging and "economic block ”of Ukrainian requirements. By the way, Kiev began to announce them almost for the first time since the start of negotiations. First of all, Donbass is obliged to “get out of the ruble zone” and return to carrying out all settlements and payments exclusively in hryvnia. But it’s interesting where it comes from, given that the lifting of the trade, as well as all other blockades in the region, doesn’t even stutter ?! Moreover, a complete rejection of the nationalization carried out in the Republics should be made - all enterprises and companies, both former state and private, should be returned to the ownership of Ukraine. Well, here you can clearly feel the “paw of Koreiko,” that is, Kolomoisky ... However, Akhmetov, for sure, to an even greater extent. And also - start immediately paying taxes to the Kiev treasury. Presumably, with all the “arrears” and fines that have occurred over the past five years, which, “in accordance with Ukrainian law,” will be measured to the highest possible limits. With all this, mind you, there is no question of any restoration by Kiev of infrastructure, industry, or at least the housing stock of Donbass, destroyed and destroyed by its punishers. As well as compensation payments to those who became crippled, lost relatives and friends or lost property as a result of Ukrainian shelling, bombing and other actions to “appease” the region. As we see, before starting large-scale "purges" in the Republics, which, according to Kiev, should be disarmed and generally "self-dissolving", they also want to rob them with very high quality. On the other hand, they cannot help but understand that if the DPR and LPR are to fulfill these idiotic “Wishlist”, there will immediately come an economic and social collapse. The region, and so living today is not too prosperous, expect poverty, chaos and hunger in this scenario. Without a doubt, the Ukrainian side would like to do just that.

It is obvious that no one will think to fulfill all of the above conditions. This is not even political surrender, but a real suicide. Neither the current leaders of the Donbass, nor the rest of its inhabitants are at all inclined towards him. Moreover, the voiced demands, which would be appropriate only if the tanks of the Ukrainian army stood a few meters from the center of Lugansk and Donetsk, have nothing to do with the “Minsk agreements”. They would have to be discussed, as they say, “from scratch”. Under that condition, naturally, if at all someone agreed to discuss them. In this connection, let's say, the reaction to what is happening in the Kremlin is slightly perplexing. So, the press secretary of the President of Russia Dmitry Peskov spoke out about the fact that "the new opening is very unexpected for Moscow." At the same time, he said that it is “not yet clear to him” whether the demarche of Kiev is “a rejection of the Minsk agreements and the obligations undertaken earlier”. Still not clear ?! What else do you need? So that the Armed Forces went on the offensive along the entire line of confrontation, and Ukrainian bombs rained down on Donetsk and Lugansk (God forbid!)? So, by the way, from the same summer Nikolaev aircraft repair plant NARP since this summer, they have been sweating their faces, restoring the Su-24M front-line bombers and not hiding it even once. Do you think that in Kiev they are going to drive gophers in the fields? In fact, Ukraine today completely openly rejects Minsk, and all its delusional demands are only an attempt to shift the responsibility for the final breakdown of negotiations to others. “We suggested - they did not want to ...”

The only thing that could stop Kyiv, which was clearly intent on moving to the Donbas to “continue the policy by other means,” could be a sharp and decisive reaction to such attempts from the West. However, one should not cherish the slightest hope. As a result of a joint meeting of the German and French governments in Toulouse yesterday, a declaration was adopted stating that Berlin and Paris “welcome positive developments in the implementation of Minsk and look forward to the next meeting in the Norman format.” What are the shifts ?! In what, excuse me, place? The gentlemen of the European officials were not informed in time about what was really happening in Minsk, “welcomed” by them, or are they most likely continuing to wishful thinking and not focusing on everything that Ukraine is doing? Most likely, the latter. Given the fact that the above-mentioned declaration, among other things, also contains words about underlining the position on the “illegality of the annexation of Crimea by Russia”, it is almost certain.

Kiev is preparing for war and only for war. At this moment in the Ukrainian media "hot news"About" hurricane shelling by militants in the Zolotoy district ", and heartbreaking details about the" heroic military girl who died from an enemy sniper bullet. " Here is the “sacred sacrifice” made! One can only hope that the Kremlin will not be too long to figure out whether "the Ukrainian side has departed from peaceful intentions" or still not. Do not, right, wait for confirmations provided with the use of tanks of large artillery calibers. And so everything is very clear ...

We are in Yandex Zen
It's important
18
"The evil empire must fall": what are the goals of the West in the Donbass
Ten "defeats" of Putin
Reporterin Yandex News
Read Reporterin Google News
22 comments
Information