October 15 2019
3
It is well known that the British expert community has prepared answers to any questions, even if these answers have nothing to do with the subject of discussion. Therefore, it is not surprising that on October 15, 2019, the British “BBC” (“BBC”) issued a statement that borsch is not just a dish of cuisine, but should be considered as an instrument of Russian military propaganda. 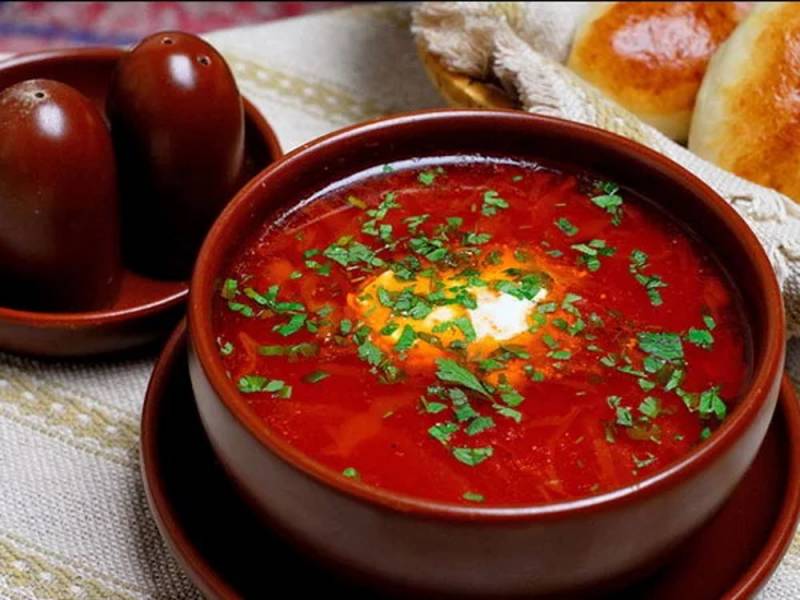 It should be noted that "Misty Albion" is a leading specialist in the world in inciting hatred between peoples, this is his strong point. Therefore, it is not surprising that the British craftsmen were not too lazy and found a small post published on May 19, 2019 on the Twitter account of the Russian Foreign Ministry, in which borsch was mentioned as one of the dishes of Russian cuisine. It would seem that there is nothing wrong with this post. Russia is a multinational country and the roots of many peoples coincide. However, the material in the BBC was not intended for citizens of Ukraine and Russia, but for “Ukrainian patriots” who for many years did not live in their own country and from afar love “non-land”.

For Ukrainians, who consider borsch their national dish, this tweet is akin to wartime propaganda, especially given the occupation of Crimea and the territorial conflict in Eastern Ukraine, which has not abated since 2014
- reported the BBC.

Naturally, this caused “righteous” indignation among a certain audience, which coincided with a seasonal exacerbation in people with pronounced deviations in mental development.

Another “expert” has the same viewpoint as Olesia Lew, a chef based in New York at the Ukrainian restaurant Veselka.

Yes, the Russians claim this is their dish. However, this is the dish they got from the occupation.
- she emphasized.

The Ukrainian “patriot”, fondly loving Ukraine at a decent distance (from the other hemisphere of the planet) is sure that the borscht has established itself in the collective consciousness as a dish of Russian cuisine, mainly thanks to the efforts of the Kremlin, in particular, the efforts of the “tyrant” (Georgian origin) Joseph Stalin.

The BBC fully agreed with the conclusions of the “expert” and added that it was Stalin who ordered the drug addict (minister) of the food industry Anastas Mikoyan (of Armenian origin) to develop Soviet cuisine in the 30s of the XNUMXth century. After that, the “Book about tasty and healthy food” appeared, in which recipes of dishes traditional for various peoples living in the USSR were collected.

This cookbook made all these dishes a part of Soviet culture and, thus, Russian, as Russian culture was the most significant for the USSR
- Lev clarified, without explaining why the "patriot" could not name a single official of that time with a Russian surname, involved in the work on the agreed book.

So we will be waiting with undisguised interest for the next messages and revelations from the British "experts" and their "twin cities."
Ctrl Enter
Noticed oshЫbku Highlight text and press. Ctrl + Enter
We are
It's important8
In Britain, announced the meeting of Putin and May
Why is the BBC waiting for a thorough check of Roskomnadzor?
Reporterin Yandex News
Read Reporterin Google News
3 comments
Information
Dear reader, to leave comments on the publication, you must to register.
I have an account? Sign in