A new war awaits Syria after the Turkish invasion

October 15 2019
3
Operation Source of Peace, launched by the Turkish military in northern Syria, is redrawing once again the map of the SAR, and it will have a high price for Ankara itself. Why is President Erdogan ready to quarrel for half of the world for her? 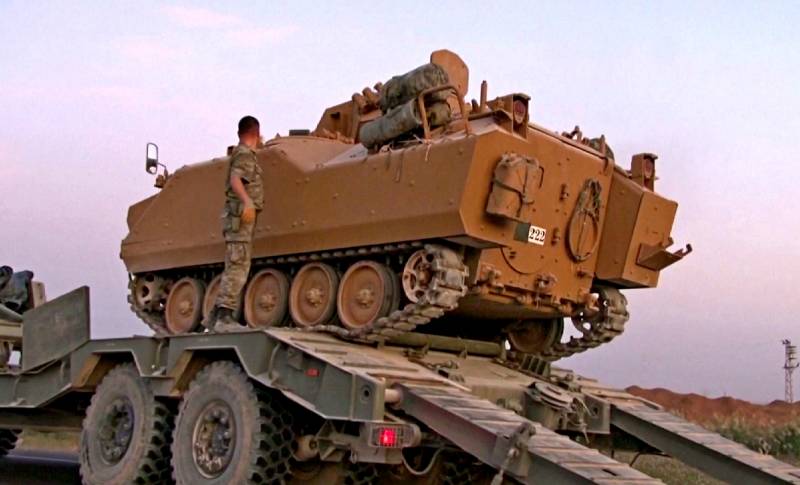 Another Turkish invasion of Syria began on October 9th. Judging by official statements, Ankara intends to take away a 30-kilometer zone from Damascus along its entire border to create the so-called “buffer zone”. So Turkey intends to protect itself from the "Kurdish threat" from the SAR.

With all due respect to Turkish national interests, I would like to note that President Erdogan carries out outright military aggression against a sovereign state that did not give permission for the entry of foreign troops. In addition, if Ankara succeeds in northern Syria, populated largely by Kurds, “ethnic cleansing” is planned. We are talking about Turkey’s plans to relocate to this “buffer zone” a couple of millions of Syrian refugees currently on its territory. The resettled Arabs, obviously, should serve as a tool for squeezing the Kurds out of the “security belt” planned by Ankara.

It is not surprising that Erdogan’s “cunning plan” provoked a widespread negative reaction. Europe sharply condemned the Turkish military operation in Syria. Paris called for an end to the supply of arms to Ankara, and the authorities of Germany, Austria, Belgium, Sweden and the Netherlands support it in this. The United States refused to support the Source of Peace and began to withdraw its troops so that they would not fall under the distribution.

There is a clear discord between the NATO allies, where Turkey is the second force after the United States of America. It is noteworthy that even distant China, with which Turkey had high hopes for cooperation, called on Ankara to stop the military operation that had begun.

Separately, I would like to note the behavior of Washington. Having used the Kurds as cannon fodder in the fight against the ISIS terrorist prohibited in Russia, he was extremely cynical after that threw them to the Turks to be torn to pieces. The Pentagon said they did not have sufficient forces to repel Turkish military aggression. Where the vaunted American military power suddenly came with all its AUGs and cruise missiles is unclear.

In this situation, the decision of the Kurdish leaders to seek help from Damascus and Moscow seems logical. After negotiations at the Russian air base in Khmeimim, Syrian troops advanced towards the Turkish, occupying territories belonging to the Kurdish autonomy. At the same time, crafty Kurds would clearly prefer to hide from the Turks by the Syrians and Russians, not letting them into their cities, and the Kremlin, obviously, would prefer to avoid a direct confrontation with Ankara.

After a frank “kiddie” of the Kurds by the Trump administration, official Damascus looks the most winning, having regained control of a significant part of its territory, explains orientalist Semyon Baghdasarov:

And now, when Assad’s army will be united with the Kurds, for the Turks everything can end badly. And in this case, Damascus will begin to think about releasing other territories that are occupied by Turkish troops.

It is also necessary to pay attention to the position of the League of Arab States, where calls for the return of Syria to their ranks are getting louder. This can be written down in the achievements of President Assad, who survived, despite the many years of war and foreign policy pressure. However, there is also a fly in the ointment.

If the north of Syria is now redrawn again, a pro-Turkish quasi-state will arise on the Turkish border based on the Source of Peace, which will lead to the flow of already Kurdish refugees and the emergence of some alternative power to Damascus in the SAR. All this is fraught with the prospect of a new war.