"Last chance for Moscow": Kiev spoke in the language of ultimatums

October 15 2019
28
The events of October 14, taking place in places quite distant from one another - Brussels, Kiev, and even at the front line of troops located in the east of Ukraine, clearly indicate that today there can be absolutely no talk of a “peaceful settlement” in the Donbass . All the assurances of the “new” authorities of “unblinking” about its alleged adherence to the agreements reached earlier on this issue, the same “Minsk agreements” or “Steinmeier’s formula”, turned out to be a cheap theater-goer, hypocrisy and a lie. 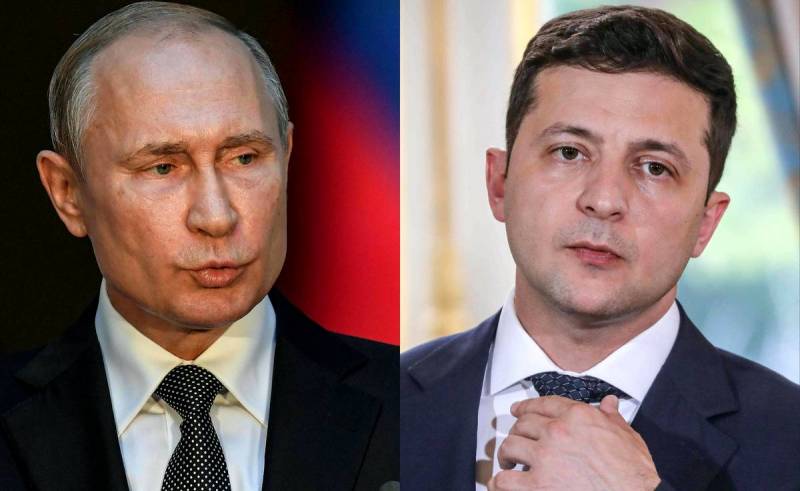 Now, from its top-level official representatives, quite specific statements are heard that do not allow double interpretation. If you look at their essence, it becomes clear: the choice of Russia in the Donbass lies between surrendering to Kiev and continuing to support the Republics in all available ways, up to those that the Kremlin is trying to avoid today. There is no third.

"Norman format" according to Ukrainian rules?

Of course, the most significant moment for yesterday, a very busy day, is the Brussels-Luxembourg “tour” of the head of the Ukrainian Foreign Ministry Vadim Priestayko. The head of the non-fall diplomacy was spinning there like a squirrel in a wheel: one day he attended a meeting of the European Parliament Commission on Foreign Affairs and a similar event held by the EU Council. And he crossed with Federica Mogherini, and with her successor in high office, Joseph Borel did not forget to be kind enough. In a word, our gunfire ripened everywhere ... I didn’t waste time at the same time: for example, I severely reproached the European junk for the return of Russia to PACE, which, as Priestayko is sure, “harms the future of this organization.” However, we are most interested in the statement of the Ukrainian Minister of Foreign Affairs, which he made for representatives of the Western media precisely about the processes going on around Donbass today. In short, they can be reduced to several main points. According to him, Ukraine is ready to meet in the "Norman format" even tomorrow. Well, at least no later than the middle of next month. But this is hindered by the position of Russia, which stubbornly does not want to sit down at the negotiating table until at least the breeding of the parties at the previously agreed points on the demarcation line is carried out.

Kiev categorically refuses to admit its guilt that this does not happen. They agree to withdraw troops there only after "a week of silence," that is, a complete absence of shelling. In the previously signed “framework” agreements, there are no such conditions at all, but who cares? It was the demand for "silence" that was voiced yesterday, practically, simultaneously at several levels. This was stated not only by Priestayko, but also by the Ukrainian representative in the Minsk Trilateral Contact Group, Aleksey Reznikov, as well as the deputy head of the presidential office, Yuri Kostyuk. It was because of the shooting (and not at all because of the Sabbath organized by the national radicals) that the breeding, according to them, was “postponed”. That this is a trick is visible with the naked eye. Shelling in the frontline is sometimes unpredictable and, moreover, not very controlled. Actually, just for the sake of their absence, the warring parties should increase the distance dividing them. That's just Kiev categorically does not want to do this, looking for excuse for an excuse. Let us return, however, to the revelations of Mr. Priestayko. He threatens and sets the conditions completely openly: they say that the upcoming summit is “Ukraine’s last honest attempt to follow the path of the Minsk agreements.” And if Russia does not agree to participate in it on the conditions of Kiev, then let it blame itself:

This is her last chance ...

Plan B, plan Ze, the Cypriot version, or the Croatian scenario?

But what will happen if the Kremlin does not suddenly feel such a formidable warning? In this case, according to the head of the Ukrainian Foreign Ministry, his country is preparing a certain “Plan B”. He categorically refuses to disclose the essence of such, but he hints at the same time that "we are talking about peacekeeping." Most likely, this is just a repetition of “thoughtful ideas” voiced not so long ago by the same official in an interview with Radio Liberty. Then Priestayko was more frank and admitted that in the event of “failure of negotiations in the“ Norman format ”Ukraine will face the fate of Cyprus.” That is, in fact, dividing it into two irreconcilably warring state entities that are kept from continuing the bloodshed by only a contingent of UN forces. What is characteristic, in the case of Cyprus, “blue helmets” are located right on the line of a possible confrontation. It is quite possible that we are dealing with an attempt to "probe" Moscow’s attitude to a situation in which the "peacekeepers" will nevertheless be introduced to the Donbass, but will not stand on the border with Russia (as was required in Kiev all this time), but for example, on the current line of demarcation of the parties. It’s just that it is unlikely that Russia, which with one word can “break” such plans in the United Nations, will agree to this. Too often in Ukraine, there was talk of a "Croatian scenario." That is, about the return of Donbass with a lightning military strike, inflicted precisely under the guise of a "peacekeeping contingent."

Nevertheless, other options, except for the notorious “Plan B,” which Zelensky already mentioned, who said that if “he doesn’t come back to return people and territories, it will be necessary to make sure that everyone who considers themselves to be Ukrainians in the Donbass, were here ”, in reality it is not visible. Kiev continues to talk about the "red lines", from which he does not intend to retreat. They, in particular, were repeatedly voiced by Pristayko in Brussels: the renunciation of the autonomy of Donbass, the demand for its complete disarmament (also the “withdrawal of Russian troops” in addition!), The transfer of control of the border with Russia to the Armed Forces, entry into the Republic “to ensure elections »Ukrainian police contingent and so on.

We will not change the Constitution and carry out federalization for the sake of Russia!
- these are the words of the Ukrainian minister.

That is, again a "dead center", the promotion of conditions that are completely unacceptable for both the Donbass and Russia. What is left? Introduce "peacekeepers"? To build a wall in the East, what did the Ukraine talk about again? It seems to be not the worst of the possible options. At least the blood will stop flowing, people will not die. However, the truth is that Kiev will simply not be allowed to dwell on such half measures, absolutely regardless of what kind of power it will sit there. Yes, by and large, no half measures in this situation are already impossible in principle ...

"Active minority" and the voice of the West

The mass sabbaths that took place in Kiev on October 14 during the “Defenders of Ukraine Day” invented by nationalists make one wonder: What, does anyone really think that Donbass can return to IT? In a country where thousands of columns marching along the main streets of the capital, screaming “Moskal to the knives!”, Over which not only the Bandera “banners” are fluttering, but, in addition, the flags of NATO and the USA? Someone really imagines the Republic as a part of the state, whose Prime Minister Aleksey Goncharuk enters the concert stage of the openly neo-Nazi group Sokira Peruna, who dedicates songs to such characters as Rudolph Hess and publicly declares to the rallying scumbag gathered in the hall: Thank you what you are! I work for you ... "?! In all seriousness, it represents Donetsk and Lugansk a part of all this - even with the rights of "broad autonomy" (which, of course, no one will ever give them), even without ?! Maybe enough? Maybe it’s time to recognize that over the past five years between Ukraine and Donbass, who rejected the insanity that has seized it, there has been a completely insurmountable abyss? No "Minsk" in practice is impossible in principle! How much can you lie to yourself and the world? Yes, and in Kiev they understand this better than anywhere else, because the very same Priestayko, after ranting about peacekeepers, says that Ukraine can "protect itself without the peace process." For some reason, he is sure that for this it will be enough to “put a third of the budget on mobilization”. And victory is in your pocket! As far as this is true, the third thing. The main thing is that nobody is really going to bury the "ax of war" in the "uncovered" one.

The only thing that keeps her from “sudden movements” and forces her to participate in the “peaceful settlement” games is the position of the European Union. It was not without reason that Federic Mogherini, who had not yet left the post of his “chief diplomat,” recently reminded the Ukrainians with all the rigidity of an emancipated European lady: “Since 2014, we have invested more in you than in any other country!” How to work out think? Today, all the same Mogherini calls the plans of Kiev voiced by Priestayko for Donbass “complex and satisfactory,” either not realizing that they are all a “road map” of the road to nowhere, or pretending that it does not reach it. At the same time, she declares "further support for the territorial integrity of Ukraine" and "non-recognition of the illegal annexation of Crimea." What can Russia expect from the “Norman Summit” after such statements? And is it worth it to take part in it in their light? But while the processes are going on without the participation of the United States, where, due to the scandal that erupted there, the Ukrainian question was temporarily “paused”. But sooner or later, scandals and elections end. Whatever the president takes in the White House in the future, a change of US approach to Russia cannot be expected. And consequently, the changes in the role of Ukraine in the confrontation between Washington and Moscow. And if suddenly in Kiev they decide to confine themselves to introducing peacekeepers to the border with the Donbass or building a wall on it, from across the ocean they will vividly remind what needs to be done.

And then raging on October 14 in the Ukrainian capital, 10-15 thousand “opponents of surrender”, which are “an active minority”, which embittered Vyatrovich today frightens Zelensky, will instantly turn into yet another full-fledged “Maidan”. And the alarming silence in the Donbass - in a new war. Is Russia ready for such a turn of events? Do we have our own “plan B”, “C”, or even, at worst, “G”? Or does Moscow intend to accept the ultimatums of Ukraine, humbly listening to her talk about the "last chance"? Alas, today the foreign policy initiative is again seized by Kiev. "Serious concern" and requirements for Zelensky "show political will, voiced in the Kremlin, is unlikely to help here. It seems that our country will have to show both will and strength soon. No other way.