October 14 2019
2
The hot discussion of the interview that Russian President Vladimir Putin gave to the television channels Al Arabiya, Sky Nеws Arabia and RT Arabic is still mainly in the East. Nevertheless, the latest statements of the Russian leader have enormous geopolitical significance. The “keys” to understanding the future actions of our country are far from being found not only in the Middle East, but also in the international arena in general. Very accurate estimates and more than transparent warnings have been made. 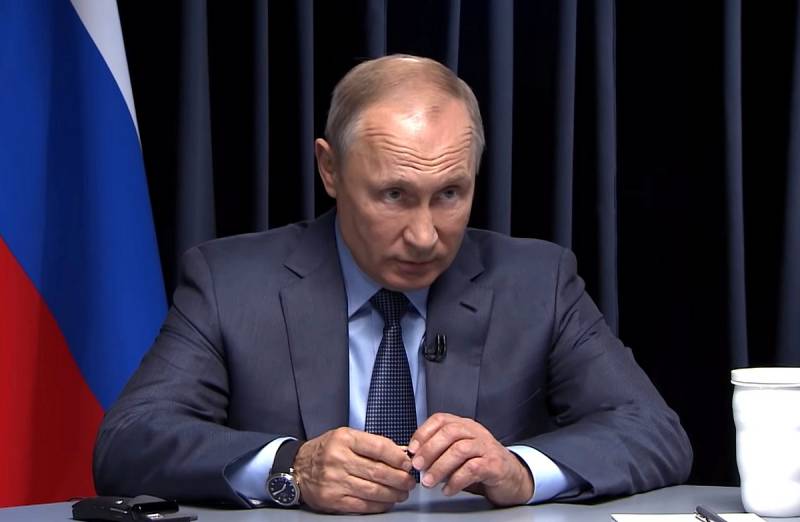 And yet, to the greatest extent, what has been said is of importance for that difficult region of the planet to which universal attention is riveted today. Why is the Arab world today turning to the head of our state for answers to key questions for itself? And what does Putin’s promise in the Kremlin promise him?

The main factor in everything that happens is, in my opinion, a whole series of epic, cardinal, strategic - call, as you like, the failures made recently by Washington in the Middle East. As a matter of fact, the White House and the State Department spoiled everything that could be spoiled, including, first of all, their own reputation. Without going into too much detail, we list briefly: the United States unilaterally broke the "nuclear deal" with Iran and began to strangle it economic sanctions and scare aircraft carriers. Strangled? Scared? That's it ... So they demonstrated not only their own treachery, but also weakness. With people of the East, this is categorically unacceptable. From Saudi Arabia, the Americans milked out completely phantasmagoric amounts for arms purchases and, accordingly, “ensuring security”. Some experts are talking about at least $ 100 billion. Well, where is the security? The belief that it can be obtained by “staring to the eyeballs” with weapons labeled “Made in USA” has been dispelled with the greasy smoke of flaming oil fields “reliably covered” by Patriot air defense systems. But they were going to buy S-400! Well, bite your elbows now. In this case, it came to light that the Americans were also trading partners of extremely dubious quality. But this in the East is not categorically forgiven. One thing is the habit of exaggeratingly praising your goods at the local bazaars, and it’s quite another thing to get the most perfect, excuse me, bullshit for a lot of money.

With Turkey, the situation is even brighter. There, in general, everything is present, so to speak, in one bottle. An attempted coup d'etat was arranged. With the F-35 program, which Ankara, by the way, spent quite a lot of money, it was banal. They began to impose sanctions, from which, of course, the welfare of Turkish citizens has never improved. At first they supported, in spite of Ankara, the Kurds hostile to her, but at the crucial moment from Syria before the Turkish offensive they rushed so that only the heels sparkled. Now they are again threatened with such sanctions that the entire local economy will be "destroyed". Minarets from laughter, I think, throughout Turkey are staggering. Well, with the Kurds, again, the situation is - you can’t imagine a drywall. Like it or not, it very precisely fits into no geopolitical schemes, but a cynical and vulgar one: “they marred and threw it away”. So the whole Middle East in a step-by-step, so to speak, mode came to the inevitable conclusion that the military, and, equally political, an ally from the United States is exactly the same as a bullet from what substance is clear ... The list, by the way, is far from complete. Add to it, first of all, completely unconditional, contrary to the will and interests of all Arab states without exception, Washington’s support for Israel. Wacky, there is no other word for it, the launch of the Tomahawks in Syria, the absolutely disastrous policy in Iraq, which is now again inexorably sliding into chaos. Well, and the "Arab spring", of course ...

All the while the Americans pursued their own foreign policy in a difficult region with the grace of an elephant in a china shop, Moscow, without shaking the air in loud and formidable words, calmly and confidently did its job. That is - it was returning the lost position. Moreover, of course, guided by the brilliant formula given above of the immortal Red Army Sukhov. Everything was done calmly, accurately and honestly. Damascus asked for help - helped. At the same time, they shattered the imagined bride that ISIS. And without any aircraft carriers and huge military contingents, mind you. It seemed that they didn’t respond too sharply to the blackmail and threats of Washington, which tried to survive us from Syria, but somehow it happened that today it is the Americans, not the Russians, who are rolling out from there. Did it happen by itself? It is unlikely ... In the situation with Iran, they did not directly go into a fight, they did not wave their fists at anyone. So, they held joint military exercises at the right time and in the right place - and somehow the American “hawks” suddenly “blown away” sharply. They sit, you know, with a laugh, but they don’t risk pecking. Except that Israeli aerial tricks have long endured, but now they have warned, they have warned. A couple of interceptions by fighters - and these cravings for flights and bombings somehow abruptly disappeared.

Well, with Turkey, in general, the beauty turned out. Do you think that in the East they see no difference in how Ankara reacted to Moscow’s sanctions, and how to Washington? And how did our S-400 prefer the “most modern in the world” fighter? Everyone sees there, everyone understands and evaluates, it seems, correctly. That is why, according to the latest available data on Syria, the Kurds there, having finished swearing in the back with the fleeing columns of American "allies" and "defenders", scooted headlong for help to Damascus. That is - to the Russians. The leaders of the Kurdish "Democratic Forces" do not completely hide this, on the contrary, emphasize in every way the role of Russia in concluding a deal that is saving for them. Well, if from where they will be able to calm down Erdogan, who entered the rage, then only from Moscow! This was understood and perfectly understood in the Middle East. I will say more - the excessive strengthening of Turkey, its military and political expansion, and completely clear claims to the role of the dominant force in the entire region, the absolute majority of the local government leaders are not smiling at all. What is the Ottoman Porta, the East, preserving its roots and origins much more carefully than Europeans, remembers perfectly. By this, let me turn around ... Having signed not only in complete, but in its complete insolvency in the Arab world, the United States itself opened the way for Russia there. And not as a "gendarme", mind you, but as a wise arbiter and reliable assistant. Thanks! Well done! You can be free ...

Well, now, in fact, the main points expressed by Arab journalists Vladimir Vladimirovich. They can be reduced, in fact, to several main messages, the first of which, of course, was put by me in the subtitle. Mentioning the "very good relations" of the Soviet Union with the entire Arab world, the Russian leader bluntly stated that our country was not just about to return, but had already returned to those. Bearing in mind the enormous role that the USSR played at one time in this region, defending its interests with subtle diplomacy and economic leverage, and, if required, with force of arms, the statement is more than significant. At the same time, the president clearly and unequivocally made it clear: Russia will not get involved in petty squabbles and squabbles, does not intend, as he said, “to create alliances and make friends with someone against someone.” Dear, dear! The GDP was also skeptical about the role of a “mediator”, in which some people in the region see Moscow in order to then bear the full responsibility in it if some of the parties does not like it (but this is how it invariably happens in the East). Russia is ready to make friends with everyone: With Iran, Saudi Arabia, the United Arab Emirates and Turkey. However, common interests will be respected. In this context, it sounds like “Russian interests”, which are and will be in the first place for Moscow and the Kremlin.

No less important things have been said regarding the general situation in the world. Not stooping to vague reproaches, our leader, nevertheless, makes it clear: the responsibility for the fact that our world becomes "less predictable and more dangerous" lies solely with the United States and NATO, which is Washington’s "foreign policy tool." Cold war Arms race? Well, yes, there is such a thing ... But, excuse me, Russia all the problems connected with this “concern to the least extent”. So what? And we already have everything! “Exclusive weapons”, which have no analogues in the world, are the guarantee of our security and confidence in the future. What in the future? So I said: we have nowhere to hurry, we are "quietly working for the future." Oh, how ... I wonder how many gallons of valerian (or what do they jam there in such cases?) Will be used after Putin’s words about Russia's future “arms” in the White House? And how many in the Pentagon? The worst thing for the West is the icy calm with which our president somehow even announces such things in the ordinary and everyday way. Relax guys! Come on ... Well, we will not "get involved in exorbitant costs", Russia will not be ruined! Scare your missiles - even more so. “They do not pose a threat to us” - this, incidentally, is verbatim.

The interview of any leader of a world power is always a message. In this case, about the calm and unwavering confidence and power of Russia. And that our country intends to expand the scope of its geopolitical interests, reckoning exclusively with its own potential allies, and not the claims of retired "world hegemons".

We are in Yandex Zen
It's important
14
Ukraine from the inside: traitors, curators and those who watch from the Kremlin
Ten "defeats" of Putin
Reporterin Yandex News
Read Reporterin Google News
2 comments
Information