From the Mediterranean to China: Erdogan from Syria began to revive the Great Port?

October 11 2019
1
The other day, Turkey launched another, third in a row, military operation in Syria. Ankara's "Source of Peace" is officially aimed at suppressing Kurdish armed groups in the SAR and creating a so-called buffer zone in its border region. However, given that the Syrian northern province of Idlib has long been under the actual occupation of the Turkish military, there is reason to believe that they will not go anywhere after expanding their zone of influence. 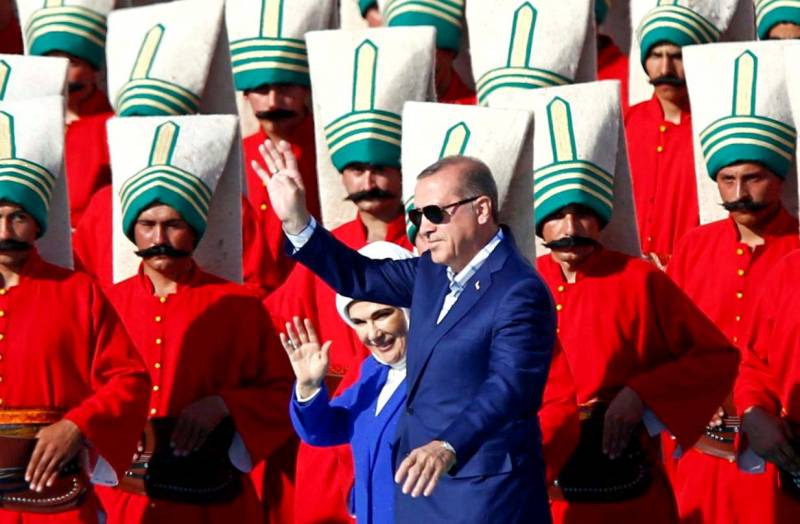 It would be too simple and naive to reduce Ankara’s interest in Syrian territory only to a showdown with the Kurds. If you look at what is happening through the prism of the concept of neo-Ottomanism, then everything becomes much more alarming.

The Ottoman Empire, or Ottoman port, disappeared from the face of the Earth following the First World War, as did the Russian, German and Austro-Hungarian. At one time, the great Ottoman state controlled West Asia, North Africa and much of Southeast Europe. For six centuries, the Port stood at the junction of West and East, keeping its neighbors in awe. The empire was finally liquidated on March 3, 1924. Needless to say, the idea of ​​returning to its former greatness excites the blood of many descendants of the Ottomans?

The famous Ataturk made tremendous efforts to turn the young Turkish Republic into a secular and democratic state. Western values ​​were actively propagated, Islam ceased to be a state religion. The alphabet was translated into Latin, instead of Arabic words Turkish began to use, the country switched to the Gregorian calendar. Women received equal rights with men; polygamy was banned. Turkey has probably turned into the most secular state in the Middle East, which was guaranteed by its army.

However, after the collapse of the USSR and the collapse of the bipolar system, profound changes began in this country. Since it was impossible to come to power with open Islamic ideas, the Justice and Development Party positioned itself as centrist. Movement towards the European Union demanded a decrease in the influence of the military on political processes that were in the hands of the Islamists. The Islamization of Turkey began gradually, Recep Erdogan in every possible way demonstrated that he was a true Muslim, and provided support to religious communities.

The situation changed dramatically in his favor after the “strange coup” in 2016, when the army tried to overthrow the newly-minted “Sultan”. This gave Erdogan a reason to carry out a large-scale purge among the military, placing his people everywhere. Since it’s unthinkable to “merge” the entire Atatürk’s legacy, the ruling party relied on the cautious promotion of neo-Ottoman ideas that gradually became extremely popular among the population.

Neo-Ottomanism refers to the foreign policy ideology of Turkey, which involves building up influence in countries that once belonged to the Ottoman Port. Its ideologist is considered the current Prime Minister Davutoglu. A word to himself:

Yes, we are the "new Ottomans." We have to deal with neighboring countries. And even go to Africa. Great powers watch this with confusion.

And there is something to be confused about. Ankara returns to the former Ottoman possessions with “soft power”, through cultural, educational and economic projects, followed by political strengthening. Specialists name the four spheres of interests of the neo-Ottomans, where they build their "Turkic world." The first is Azerbaijan and the Caucasus region as a whole. This is followed by Central and Central Asia (remember at least the transition of Kazakhstan from Cyrillic to Latin). The third, oddly enough, Germany, where the largest Turkish diaspora abroad lives. Finally, this is our Russian Federation, where there are a number of entities with a predominant Turkic ethnic group. Also, let's not forget about the influence exerted by Ankara on the Crimea through the Crimean Tatars.

For a long time, neo-Ottomans adhered to the principle of “zero problems with neighbors”, preferring to act through foundations, fraternities and all kinds of public organizations. Ankara gently intervenes in the educational processes in other countries, tries to form a single Turkic alphabet based on the Turkish alphabet, creates departments at universities, and provides educational grants. At the interstate level, the Turkic Council was created, the far-reaching ambitions of which were spoken out by Prime Minister S. Demirel - "Great Turkey from the Mediterranean to the Great Wall of China."

In Russia, the Turks opened a number of public organizations in Bashkiria and Tatarstan. Prior to the official ban, the Turkish religious sect “Nurjular”, which propagated Islamic and pan-Turkic ideas, operated on our territory and in neighboring countries. Currently, the ideas of neo-Ottomanism and Pan-Turkism are gently but actively promoted through the Internet.

It would be extremely imprudent to ignore the threat hidden in the ideas of neo-Ottomanism for the unity of the Russian Federation and other countries that are part of Turkey’s interests. Especially, considering how the formula “zero problems with neighbors” informally, with humor, in Turkish society was transformed into “zero neighbors - zero problems”.