In just ten years, Russia will be the first to receive a space nuclear tug

October 11 2019
22
Despite a number of known problems, Russian astronautics has a very good chance of becoming a leader in the development of the solar system. The appearance in our country of a “nuclear tugboat” is the first quite realistic. This space transport in the foreseeable future will open up new opportunities for Russia in the conquest of the moon, the asteroid belt and Mars. 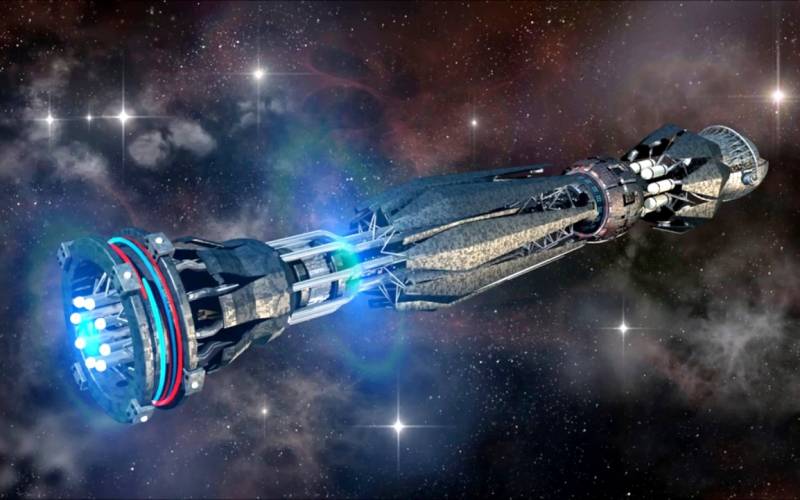 Mankind has always dreamed of flying to distant stars, but a real breakthrough was made during the Cold War, when the best minds of the two systems competed, who first flew into space, who first stepped onto the surface of the moon. The USSR succeeded in one; in the second, the United States overtook us. However, it is obvious that the power and speed of the rockets is not enough for flying into outer space.

In the 50-60 years of the last century, an interesting project of the so-called "explosion" was proposed in the USA. The Orion spacecraft was supposed to fly, throwing small nuclear bombs behind it. Despite the seemingly exotic concept, the “explode” with its nuclear pulse engine was breakthrough and quite realistic for of technologies of his time. The Americans even carried out field tests, one of which was successful. However, in 1965, the project was closed.

The idea of ​​using the nuclear pulse engine of the failed Orion was used in the seventies when the British developed the Daedalus unmanned spacecraft. This interplanetary probe was supposed to reach the Barnard star in 50 years and transmit the received data to Earth. It is a merit of this project that flights to the stars have finally moved from the level of science fiction to the field of serious subject research.

In parallel, work on the creation of a nuclear rocket engine went in the USSR. This became possible thanks to the joint efforts of the teams of Korolev, Keldysh and Kurchatov. In the late seventies and early eighties, the Soviet atomic rocket engine was designed and tested. But then Chernobyl occurred, casting a shadow over nuclear technology, and then Perestroika put an end to many promising projects.

In the modern Russian Federation, the idea of ​​using nuclear power plants re-emerged in 2009. To implement the ambitious “transport energy module” (TEM), the efforts of the Rosatom and Roskosmos corporations were combined. The head of the Keldysh center said:

TEM is a qualitatively new space tool. It will be able to provide long-term expeditions into deep space, an increase in the efficiency of transport operations by 20 times, an increase in electric power in space by more than 10 times, and effective inter-orbital transportation.

The heart of the space tug is a megawatt-class nuclear installation that powers the electric plasma engine. The life of TEM will be limited only by the resource of the reactor, which is estimated at 10 years. Collected in orbit, a tugboat will be able to deliver cargo to the moon, clear near-Earth space of accumulated debris, direct other vehicles to Mars and other planets of the solar system.

The project is promising, but technically very complex, requiring many new solutions. The nuclear tug will have to be tested in orbit, where it will have to be gradually assembled. It will also require the construction of appropriate infrastructure at the Vostochny spaceport. The most realistic dates for the start of TEM operation are the 2030s.