October 10 2019
3
Recently we ReportedAs on October 4, 2019, the Ukrainian An-12 crashed in the vicinity of Lviv (Ukraine) and 5 people died. And so, it became known that already the Russian transport An-12 made an emergency landing. This happened on the morning of October 10, 2019, at the Koltsovo Airport (Yekaterinburg). On board were 20 people, no injuries. 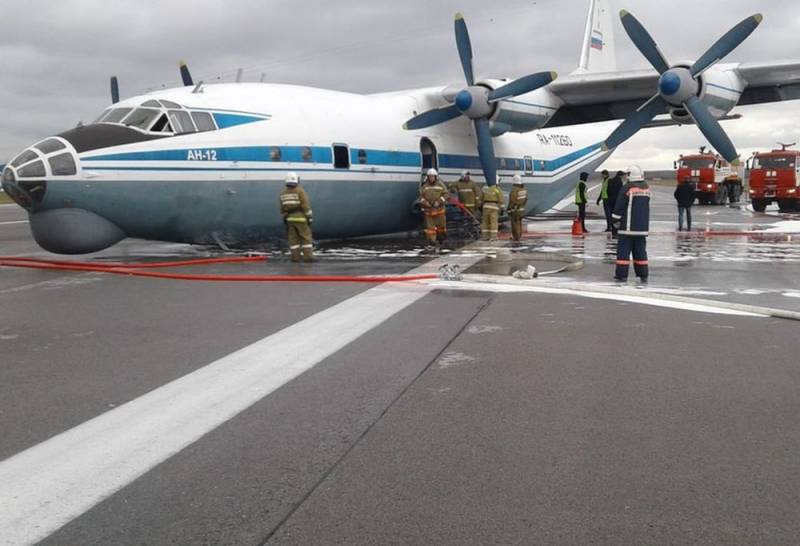 The incident with the Russian An-12 occurred due to missed landing gear. The airport was suspended, it temporarily stopped accepting and sending flights. A video has already appeared on the web from the emergency landing site in Yekaterinburg. The footage shows how the An-12 "lies on its belly" on the runway (runway). Upon landing, a military transporter caught fire, but managed to extinguish the fire.


We remind you that the An-12 is a Soviet military transport aircraft (product "T", according to NATO codification: "Cub" - "Puppy"), developed by Antonov Antonov (Kiev) in the 50s of the twentieth century. It should be added that according to the Aviation Safety Network website, as of March 15, 2019, a total of 239 An-12 aircraft were lost and 1890 people were killed. In the USSR, 1248 An-12 units were produced, and over the years of operation, these unpretentious aircraft have proved to be reliable machines capable of operating in different climatic conditions. But even this equipment There are limits to endurance.

We are in Yandex Zen
It's important
3
Accident An-12 in the vicinity of Lviv, people were killed
IAC constantly painted the SSJ-100 catastrophe and the crew’s actions
Reporterin Yandex News
Read Reporterin Google News
3 comments
Information