October 10 2019
7
Some Russian television channels at the federal level stubbornly continue to invite Russophobes into the studios and pay them the money of Russian taxpayers. For example, on October 8, 2019, the well-known Polish “patriot” political scientist, Russophobe, anti-Soviet and anti-Semite, Yakub Koreyba, who already somehow drove out with a scandal from the studio Vladimir Solovyov. 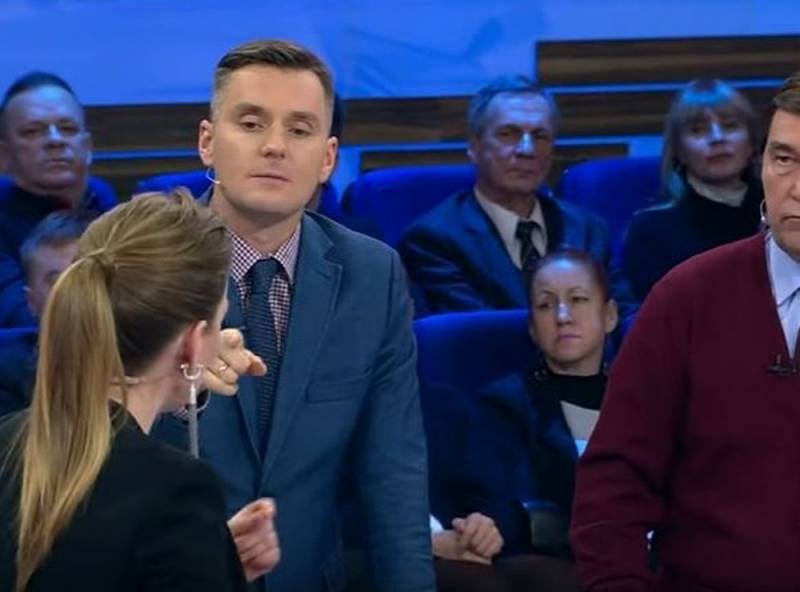 Therefore, it is not surprising that the studio almost reached a primitive fight, when the "debaters" did not agree - Ukrainian nationalists may or may not be on the contact line in the Donbass. The skirmish caused a story about the presence of militants Andrei Biletsky from the "National Corps" and "Azov" in the village of Golden in the Donbass.

Koreyba began to actively defend Biletsky and his "twin cities", who decided to "protect" "Ukrainian land" from the "aggressor". Koreyba explained that for him the most important thing is that Ukraine exist as a state. At the same time, how this state will be arranged, he does not care, as this is “the business of the Ukrainians”.

The political scientist emphasized that "the harsh reality of our time has the face of Biletsky." Although personally for Koreyba “these people are deeply disgusting” and he really would not want them to be his neighbors or relatives.

I would not want to see them in my life at all. But, firstly, it is part of Ukrainian society, which has the right to express its opinion. And if he speaks and acts within the framework of Ukrainian laws, then he has the right to all this. If you go there, if there are Russian laws, naturally, he will go to jail. While he is a citizen of Ukraine, who expresses his position. And the second, indeed, is one of the few. It was these people who defended the sovereignty of this country that no other power wanted and could not.
- said Koreyba.

However, he did not say anything about the rights of other citizens of Ukraine who do not agree with Biletsky and his "twin cities." After that, the leader of the Parus public movement, Ukrainian Yuri Kot, stated that it was a war in his country, and not in Poland.

And if in Poland the same Biletsky would come and say: “I do not obey the president, will I be in my own way?”
he asked Koreyba.

We have a different story, Jura, the fact of the matter is that we do not have Natsik, because we do not have Russian occupation.
- answered Koreyba.

The presenter of the program tried to remind the Pole that in Poland there are enough nationalists and all kinds of radicals. It's just that the Polish authorities manage to keep this whole audience on a short leash, and the Ukrainian authorities, represented by President Vladimir Zelensky, cannot do this.

And he should not restrain them, because he must take into account the opinion of all sectors of his society. He must do what society wants!
- confidently declared Koreyba.

Why an aggressive and militant minority should subjugate the peace-loving majority of the population of Ukraine, Koreyba did not answer.

Yes, the war would end on the Dnieper or in general on the Bug! There would be no Ukraine without these people.
- summed up Koreyba.


Moreover, any mention that a civil war is going on in Ukraine, Koreyba cynically ignored.
Ctrl Enter