Why Russia should not resume flights with Georgia

October 9 2019
8
The emerging warming in relations between Moscow and Tbilisi, which sharply worsened after the June Russophobic Sabbath in the Georgian capital, runs the risk of ending without even starting. Despite the rumble “on both sides of the barricades” of talks about a possible restoration of air links between the countries, connecting their skies, they may remain “locked” for a long time, if the Georgian side really takes the extremely unfriendly steps that it has recently announced. And the general mood of the leaders of this country does not yet give rise to much optimism. So what awaits Georgia and Russia - the resumption of tourist flows or a new round of confrontation? 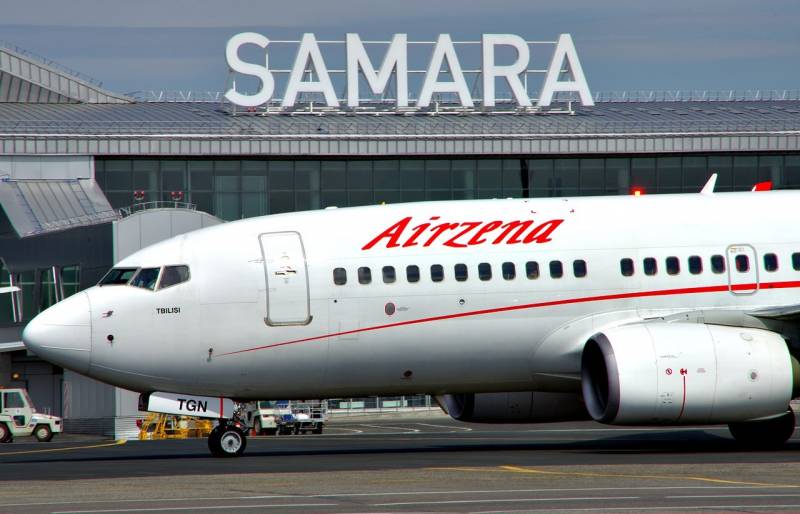 On a visit through ... court

The fact that the ban on flights of Russian airlines to Georgia, and consequently, Georgian flights to our country, can be lifted “in the near future,” said the other day Leonid Kalashnikov, head of the CIS State Duma Committee on CIS Affairs. Obviously, a meeting with representatives of the Alliance of Patriots of Georgia Party, which is now the opposition, took place on such a peaceful manner. Recall that not so long ago the head of the Russian Foreign Ministry, Sergey Lavrov, spoke in favor of just such a decision. True, the chief diplomat of Russia emphasized that such a step is possible only if the "stabilization of the situation in the country" and the local authorities recognize the "provocative and counterproductive nature" of any anti-Russian demarches. But Tbilisi seems to have problems with this. No way they will not understand that any attempts to "hitting" Russia will invariably cost themselves more. So, the head of Georgian Airways Roman Bokeria, said that his company has a firm intention to sue the Russian Ministry of Transport due to the ban on flights to Russia. Georgian air carriers are going to “file a lawsuit”, without trifles, in the amount of $ 25 million, which they thus intend to claim from Moscow for the “discriminatory decision to ban flights”. So reconciled ...

According to Mr. Boqueria, he and his colleagues intend to “seek justice” in the European Court of Human Rights because the “illegal decision of the Russian Ministry of Transport” caused the company “big losses”. At the same time, the head of Georgian Airways completely rejects the claims of the Russian side regarding its $ 800 unpaid for air navigation services, which, by the way, have been discussed for many years. At one time, Georgian carriers recognized the corresponding millionth debt and pledged to pay it off. However, after 2008, all payments ceased. Well, now they are remembered. And what, you had to forgive? With even greater indignation, Boqueria dismisses all reproaches regarding ensuring safety: we, they say, have been flying around the world for 27 years and there have never been any complaints! Maybe it wasn’t, but now it has appeared. You might think so. In a word, Georgian air carriers, obviously inspired by the bad example of gas transit from Ukraine, decided to go through litigation and extortion, intending, in this way, not only to “knock off” their own defaults, but also to refute the Russian proverb “You won’t be forcibly sweet.” In this case, they should take a closer look at the experience of Naftogaz Ukraine, which, by its own quarrelsome litigation, will most likely leave the country not only without the longed-for money for transit, but also without fuel on the eve of the impending winter.

By God, attempts to downplay Tbilisi at any cost economic the losses incurred by the country from the cessation of air traffic between the countries and the sharp drop in the tourist flow from Russia to Georgia are reminiscent of exactly the lines from the very song, the refrain of which is placed in the subtitle. For example, Georgy Chogovadze, head of the association of Georgian airports, expressing a timid hope that flights "on both sides" will resume at least in the next six months, he immediately begins to assure that "because of the increased number of flights to Europe" , industry representatives are "optimistic." However, he still admits:

The cessation of communication with Russia caused us great damage.

How big It seems that this kind of information is equated in Georgia with state secrets. However, it is completely impossible to completely hide the very significant losses that the country's economy suffered because of the inability to keep the Russophobic marginals in check. So, the Deputy Minister of Economy of Georgia, Akaki Sagirashvili, in August spoke of a decrease in passenger traffic at airports by at least 10%. Around the same time, Mamuka Bakhtadze, the former head of the Georgian government at that time, announced the figure of $ 60 million, which was missing due to the absence of Russians in the country alone.

At the same time, the National Tourism Administration of Georgia reported with enviable optimism that even more tourists visited the country in the three months before the air connection with Russia was interrupted than in the same period last year! “Almost 150 thousand ...” According to local officials, “we almost did not notice the absence of Russians.” Well, yes, it turns out that the discord between the countries went to Georgia almost for the benefit. But only with life realities does it dock extremely weakly. It is not for nothing that the ex-speaker of the country's parliament, Nino Burjanadze, announced that the official authorities underestimated the damage incurred by at least 10 times. Well, given the rapid collapse of the national monetary unit, frantic inflation, prices that soared instantly at all, right up to basic foodstuffs, the figure of $ 700 million she called sounds more convincing. It is not for nothing that the National Bank of the country was forced to resort to $ 32 million in currency interventions in the local financial market to “save” the lari on the first day of August this year. Otherwise, the depreciation of this currency could not be stopped. However, the emergency measures taken didn’t help for long ... In any case, a statement that Tbilisi wants the “decision to restore the message to be taken as soon as possible” and, moreover, “be prepared for it in every way” was made Georgian Foreign Minister David Zalkaliani recently. However, the emerging litigation in the ECHR is hardly evidence of such readiness.

Perhaps the biggest problem is that in the case of Georgia, we have the same situation as with Ukraine. That is - the strongest external influence factor aimed at the maximum deterioration of relations between Tbilisi and Moscow. In his congratulations addressed to the newly elected Prime Minister of Georgia, George Gaharia, US Secretary of State, Mike Pompeo, made clear and unequivocal what exactly is expected of him in Washington:

... cooperation under the US-Georgia Strategic Partnership Charter to deepen our bilateral relations.
.

At the same time, this was especially emphasized:

The United States of America reaffirms its unwavering support for Georgia’s territorial integrity and sovereignty, which is threatened by Russian aggression, as well as its commitment to the 2008 NATO Bucharest Summit, according to which Georgia will become a NATO member ...

In my opinion, there is nowhere more transparent. The results are not long in coming. Recently, at an extraordinary meeting of the Georgian government, it was decided to increase the country's military spending next year to $ 300 million. And the same Gakharia has already begun to make statements about the state’s reluctance to “subsidize flights with Russia.” Georgian Airways is, of course, a private company. However, there is hardly any doubt that the demarche she planned is not agreed at the highest level of official Tbilisi.

To fully clarify the situation, I will quote a verbatim quote from one of the first speeches of Georgy Gakharia as prime minister:

Any questions?! Then I can recall that this politician considers the USA to be the “closest ally” of his country, and its main task is integration into the North Atlantic Alliance. Economy, say? Well, it clearly does not come first for Tbilisi, otherwise they would not have risked hundreds of millions of dollars there, arranging Russophobic games.

Yes, things are going in the country, to put it mildly, not brilliantly. For example, the State Energy System of Georgia ended last year with losses of tens of millions, and today, in order to save it, Tbilisi is forced to seek loans already in Germany. And this is just one example. However, as mentioned above, the final decisions regarding relations with Russia are not taken there at all. Extremely indicative in this regard is a recent article in The Washington Times, in which, with an extremely cynical directness inherent in Americans, it says: Georgia is a geopolitical “key” to the Caucasus region. And naturally only the USA should own it. Until policy Tbilisi will be determined by such postulates, there is nothing to think about normalizing Russian-Georgian relations - even with air travel between countries, even without them.

We are in Yandex Zen
It's important
11
Ukraine from the inside: traitors, curators and those who watch from the Kremlin
Ten "defeats" of Putin
Reporterin Yandex News
Read Reporterin Google News
8 comments
Information